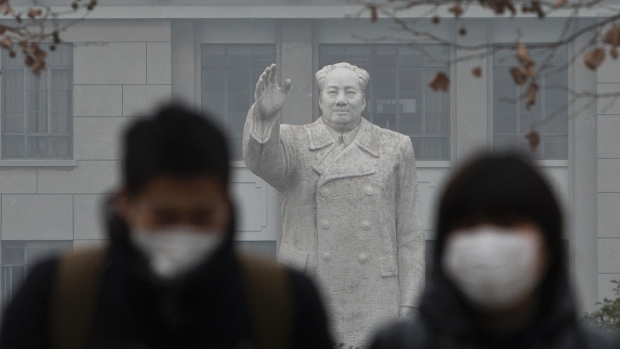 Following a research report stating that Beijing’s environmental conditions are “barely suitable” for living, China is now sending government investigation teams to regions that are worst hit by smog in an effort to reduce environmental degradation. CBC News reports:

Twelve teams of inspectors will head to the cities of Beijing, the nearby city of Tianjin and Hebei province to see how authorities are responding to the worst air pollution in months, the Ministry of Environmental Protection said on Sunday.

The inspectors will visit construction sites and factories producing steel, glass, cement and coal products, the ministry said. Those found to be violating production standards will be publicly identified.

Authorities have issued innumerable orders and policies to try and clean up the environment, investing in projects to fight pollution and empowering courts to mete out stiff penalties. But enforcement has been patchy at the local level, where authorities often rely on taxes paid by polluting industries. [Source]

On Friday, authorities in Beijing raised the air pollution alert to “orange” for the first time. In many parts of China, emergency measures have been taken such as the reduction of vehicles on the road and the suspension of factory production. From Xinhua:

Beijing went on orange alert on Friday for the first time. Manufacturing plants in the city have suspended or cut production, building work is halted, and no barbecues are allowed.

Thirty-six enterprises have suspended production, another 75 reduced their output since Friday,according to Beijing Municipal Commission of Economy and Information Technology.

At a construction site on the north side of Xinhua East Road in Tongzhou District in Beijing, construction work has been suspended since Friday. Reporters could see no trucks with construction waste or bare earth at the site.

A worker said work had been halted after receiving the smog alert.

Barbecue stands near Beijing’s Minzu University of China were advised to close by staff from the Beijing municipal bureau of environment protection, according to a vendor. [Source]

While China has seen an increase in environmental protests in recent years, the relatively isolated movements have not been able to coalesce into a coherent national environmental movement. Wu Qiang, a political science professor at Tsinghua University, looks at some of the barriers standing in the way of a nation-wide environmental movement. China Change recently translated his piece, written a year ago:

Second, an independent judiciary and fair markets are the fundamental prerequisites for an environmental movement to unfold. In the past ten years, although the Property Rights Law was passed, private property owners are still unable to obtain effective protection. It is difficult for private property owners or environmentalists to resist pollution by asserting their property rights, or to make claims and demand compensation for rights infringement by polluters.

[…] Third, the biggest sources of pollution, for example, industries that produce, process, and use fossil fuels, including China National Petroleum Corporation (CNPC), Sinopec, major coal producing provinces and industries, coal-fired power plants, the automotive industry, etc., have already formed strong interest groups. They respond negatively to reducing runoff and preventing pollution, but are confronted with few effective challenges. In the face of these interest groups, it is often only possible for organized civil society, such as environmental groups, media, and social movements, to have a chance at confrontation. The small minority of victims who file lawsuits based on rights violations are as futile as someone asking a tiger for its skin.

Unfortunately, the vast majority of environmental NGOs that have sprung up since the mid-1990s have chosen to cooperate with the government over the past decade or so. They have avoided conflict and avoided being drawn into any social movements. They have even avoided consciously promoting the development of environmental movements. Their choice of course can be attributed to the government restrictions on NGOs and environmental issues; cooperation is their only political opportunity. For example, in the anti-hydroelectricity activities in Nujiang (怒江), cooperation between environmental groups and the central government for a time won them a victory in the resistance against the local government and interest groups. However, in the long run, it is very difficult for such limited, “disposable” cooperation to yield results. The conservative approach of environmental NGOs, in the end, has lost them the opportunity to mobilize the public. [Source]