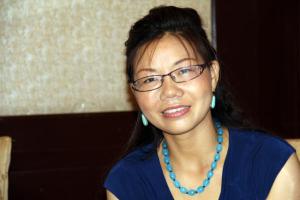 While she writes in an autobiographical essay that she was born in 1972 in Hunan as a “peasant’s child” and received “a red education” that led her to “deeply” love the Party,  Xiao Guozhen ended up finding a unique path as one of China’s few outspoken human rights lawyers–inspired to study law after “a close relative was suspected of committing a crime.” Currently in the United States after years of working on human rights cases in China, Xiao is now applying for fellowships, improving her English, and publishing articles to support her arrested friends including lawyer Ding Jiaxi.  She has also published articles on the significance of “same-city dinner gatherings” which sprang up in China in 2011 and on her experience helping a man from Hubei who had tried to rescue petitioners from black jails in Beijing. She wrote of the government’s crackdown on those aiding petitioners in The New York Times: “Darkness always hates the light. Ugliness always hates beauty.”

I spoke with Xiao about the significance of her Christian faith and the changing strategies lawyers have used in the face of tighter controls as part of my thesis research at the University of California, Berkeley:

Since 1998 Xiao Guozhen has worked as a legal advisor, economist, and human rights lawyer in China, earning the title of one of the 25 Notable Rights Defenders in Mainland China in 2012 by boxun.com.  She has aided petitioners, assisted independent candidates seeking election in China’s National People’s Congress, organized citizen gatherings, and investigated the “abnormal death” of Li Wangyang.  An advocate of democracy and constitutionalism, Xiao also keeps an active blog but says that many of her posts have been deleted due to their “sensitive nature.”

Xiao is also one many Chinese rights lawyers who have converted to Christianity.  In December of 2002, Xiao left Hunan Province for Beijing, where she said other Christians influenced her ideas about religion.  She related the “spirit of law” with values she sees in Christianity including justice, love, charity, and goodness explaining that: “If we really hope for the people to be ruled by the law we should pursue the path of Christ.”  She joined Congress and President Obama at the 61st National Prayer breakfast in 2013, hosted by the U.S. Congressional Committee and alleged that there are strong ties between American democracy and Christianity: “Human rights come from God. They are not authorized by others.  Democracy means governed by God. This is why the government is afraid.  When the Chinese people recognize that they are governed by themselves,  they will recognize the CCP’s illegal governance that is not authorized by the Chinese people.  They became governors of China not by election but by guns,” she said, citing Mao Zedong’s quotation that “political power grows out of the barrel of a gun.”

She explained that the Communist Party cracks down most on organized groups like illegal house church Christians, New Citizen’s Movement attendees, or Falun Gong practitioners out of fear of strength in numbers.  Although she emphasized that the Party cracks down on group gatherings, she said that lawyers have actually banded together when defending clients for extra protection. Whenever a lawyer travels, Xiao said they constantly stay connected to other lawyers, in person and especially via the Internet; if a lawyer is detained, the lawyers work in groups to appeal for that lawyer’s release.

According to Xiao, last February in Hefei City, Anhui, the daughter of the dissident Zhang Lin, Annie, was forbidden to attend the Hupo Primary School where she lives. As a result, many lawyers traveled to Hefei to appeal on her behalf.  She said, “This strategy is used more and more.  We publish information to the Internet.  We go to that city and say: ‘please watch for me.’  Then we’ll look out for her or for him.” While Xiao has never been to jail, she has been detained in police stations for hours.  Still, she hasn’t lost hope: “We are all prepared for it.  We regard it as a joke.  We will summarize strategies together.  We are not sad, we are not miserable.”

She added that pursuing rights cases is an uncertain terrain and that there’s no clear boundary when it comes to working inside or outside of the Communist Party system.  Sometimes, when she is ordered not to defend a specific client over the phone, she obliges, and other times she does not.  She described this tactic with the Chinese phrase “shēng dōng jí xī” (声东击西), which means at once pretending to move east while in reality attacking west.  She also referred to this phrase when asked if she works inside or outside of the system, explaining that she does both and that the boundaries are “vague.”

As a result of her work, Xiao said that the policemen and officers of the Beijing Bureau of Justice often threaten her:  “Police keep you home and follow you and interrogate you and arrest and detain you and put you into prison.”  But she said she has a weapon: law and also the communication with her fellow lawyers who work together to avoid landing in jail: “We often communicate with each other on how to face the authorities.  Communicating helps us form strategies.  At the same time, we can’t all go to jail, we have to keep up our fighting strength.”

Xiao is deeply pro-American and thinks it is in the best interest of American national security to support the human rights work of lawyers. While she appreciated what the U.S. government has done to help rights lawyers in China, she said that some of her lawyer friends think it is not enough and that the U.S. can do more: “We cannot exchange the economic interests with human rights in China.  Human rights cannot be improved if the one-party dictatorship can’t be ended.  China will be dangerous for the other countries, including the U.S.  Just like what Japan did to Pearl Harbor.  It’s not a right to improve human rights in China. It’s a duty.   Only if the dictatorship is ended can rule of law can be established.”