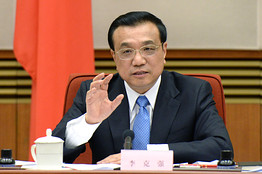 AFP reports on the National People’s Congress scheduled to commence this Wednesday. Topics likely to be discussed during the legislative session include economic reform, environmental protection, and the ongoing corruption crackdown. From Yahoo News:

The rubber-stamp NPC, which begins Wednesday at the imposing Great Hall of the People on Tiananmen Square in Beijing, serves as a show of unity in the nation and the ruling party.

[…] The event will be closely watched for China’s annual economic growth target — which was given at 7.5 percent for last year — a figure analysts follow for insight into the leadership’s thinking about the economy and how they expect it to perform.

Other topics likely to be mentioned in the report are an ongoing and high-profile crackdown on official corruption, China’s multiple environmental problems including hazardous smog regularly enveloping major cities, economic reforms, and territorial disputes in the East and South China Seas. [Source]

But the focus of the session will likely be on the economy. The meetings will give the ruling party a chance to explain some of its thinking on how it wants to roll out economic and social reforms, already announced at a Communist Party meeting last November. This comes after data early this year has suggested China’s economy is continuing to lose steam, dragging down the rest of Asia too.

[…] The premier will outline reform plans for the year and disclose the government’s targets for economic growth and inflation. A separate report will offer up details on the national budget.

[…] The report will almost certainly address the need to keep a grip on soaring local government debt, which swelled to 17.9 trillion yuan ($2.93 trillion) as of the end of June last year, from 10 trillion yuan in 2010.

The premier also will touch on the broad goals of opening up the capital account, which covers investments, and the need to make the renminbi exchange rate more flexible. There may also be a general statement on financial reforms, such as relaxing controls on interest rates and creating a deposit insurance system to protect the general public in the case of a bank default. [Source]

Global Times lists family planning, urbanization, and pensions among other issues that are likely to dominate the session:

East China’s Zhejiang Province implemented a new birth policy on January 17 allowing couples to have two children if one of them is an only child, according to an announcement by the standing committee of the provincial people’s congress.

[…] New urbanization was a buzz word during the two sessions of all 31 provinces, municipalities and autonomous regions, and was included in regional government work reports. More than 20 regions have decided to reform household registration systems and help rural migrant populations gain urban residence permits, chinanews.com reported.

[…] Many provincial governments have proposed policies to improve pension services in their government work reports in order to better service the aging populating.