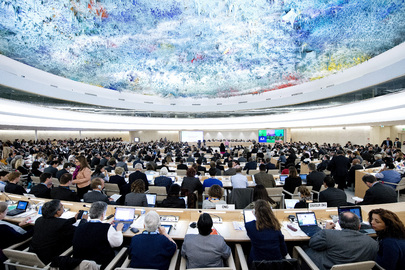 At a UN Human Rights Council (UNHRC) session in Geneva today, US and EU representatives voiced criticism of China. One of 47 UNHRC member states, China was called to task for its increased control of the Internet, intensifying crackdowns in the minority regions of Xinjiang and Tibet, and recent detentions of activists including New Citizen’s Movement founder Xu Zhiyong, now serving four years in prison, and Uyghur scholar Ilham Tohti, accused of separatism. Special issue was raised with the March 14 hospital death of activist Cao Shunli after allegedly being denied medical treatment while in detention since September. From Reuters:

The United States and European Union (EU) accused China on Tuesday of using arrests and harassment to silence human rights activists, also voicing consternation at the death in custody of a prominent dissident.

“We note with profound sadness the recent death of Cao Shunli, an activist who urged independent civil society participation in China’s Universal Periodic Review process and was detained until recently,” [US charge d’affaires] Mulrean said.

[…] Cao staged a two-month sit-in along with other activists outside the Foreign Ministry starting in June to press for the public to contribute to a national human rights report.

She went missing in mid-September after authorities stopped her from flying to Geneva for a human rights training programme ahead of an examination of China’s record known as the Universal Periodic Review (UPR). She was arrested in October on suspicion of “picking quarrels and provoking troubles”.

Greece, speaking on behalf of the EU, said it was deeply shocked by Cao’s death after her detention for “supporting the participation of independent civil society” in the U.N. review. [Source]

China has voiced strong dissatisfaction at and firm opposition to US and European comments regarding the death of Chinese national Cao Shunli.

Foreign Ministry spokesman Hong Lei said at a daily press briefing on Monday, “China expresses strong dissatisfaction and firm opposition to the mistaken remarks made by the governments and institutions of the US and Europe on the death of Cao Shunli.”p Cao was chronically ill, said Hong.

For a detailed account of Cao Shunli’s life and activism, see “The Life and Death of Cao Shunli,” from China Change.