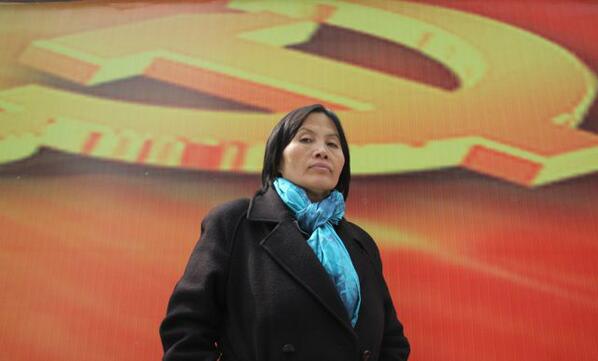 Human rights activist Cao Shunli has died in hospital after being denied treatment for tuberculosis, liver disease and other conditions until last month. Cao was detained on September 14th after taking part in a two-month sit-in outside the Foreign Ministry in Beijing, calling for public participation in a U.N.-mandated national human rights report. She was formally arrested the following month for “picking quarrels and provoking troubles.” From Sui-Lee Wee at Reuters:

“When the weather gets warmer, we will stand outside the door of the foreign ministry, continue to petition and call for the supervision of the government’s actions. We will remember this date.”

[…] Cao’s family saw wounds on her body, Liu Weiguo, a lawyer who has been acting for Cao, told Reuters, citing another of her lawyers, Wang Yu. But it is unclear how they were inflicted.

“The hospital is not willing to let the lawyer and the family look at the body,” Liu said. [Source]

Amnesty International’s Anu Kultalahti described the authorities’ behavior towards Cao as “callous and calculating,” and said that they now “have blood on their hands.” Human Rights Watch’s Sophie Richardson urged greater international scrutiny of China’s treatment of activists:

Chinese officials have claimed in recent days that, “No one suffers reprisal for taking part in lawful activities or international mechanisms.”  “Citizens have the right to criticize and make suggestions to any state organ or official.” “There is no so-called issue of suppressing ‘human rights defenders’.”

These statements should be at the core of all other governments’ interventions in Geneva next week, at the final phase of the United Nations’ Human Rights Council’s Universal Periodic Review of China.

[…] Everything about the circumstances of [Cao’s] case – the harassment she faced, her arbitrary detention, the ludicrous and legally baseless charges against her, the reluctance or refusal to swiftly grant access to adequate medical care – suggests it’s unlikely the Chinese government will voluntarily agree to an independent, credible investigation into her death. But with her passing, the onus is on all those concerned about human rights in China to battle for the kind of transparency for which Cao paid with her life.

As China goes before the Human Rights Council on March 19 to defend its dubious claims to respect rights, it should be made to answer for Cao’s death and to promise that those responsible are held accountable. [Source]

As CDT has reported, Cao’s name was already a blocked search term on Sina Weibo. Fei Chang Dao notes that Baidu and Tencent have also started censoring searches since her death.

Authorities have also obstructed medical treatment for Liu Xia, wife of 2010 Nobel Peace Prize winner Liu Xiaobo. Liu Xia’s physical and emotional health are said to have deteriorated seriously over the course of her three-year illegal house arrest, but she was finally able to secure hospital treatment for heart problems last month. The U.K. Foreign Office has issued a statement on the issue in response to Cao’s death (via Jamie Kenny):

We are saddened to hear that Chinese human rights activist Cao Shunli has died in detention, after she was reportedly denied medical treatment for serious illness. Ms Cao was a courageous activist who pressed for independent civil society involvement in China’s Universal Periodic Review process, and was detained in September 2013.

Members of the Human Rights Council are bound to uphold and promote the highest standards of human rights. We strongly urge the Chinese authorities to ensure all detainees have access to adequate medical care, and to release all those detained for exercising their constitutional rights to freedom of expression, association and assembly. [Source]