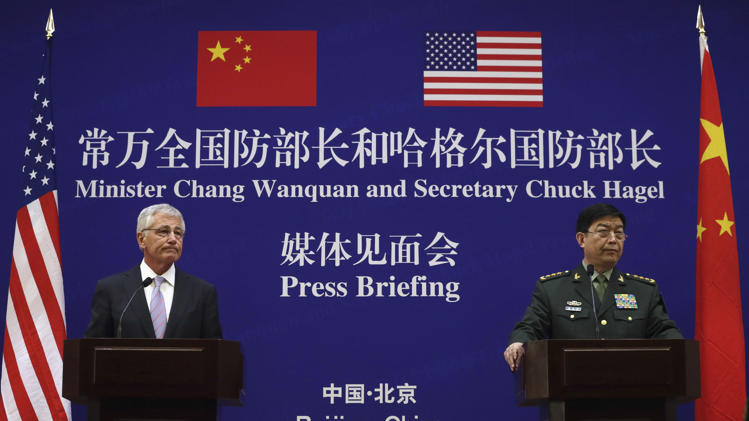 Over the past 18 months, China has become increasingly assertive regarding longstanding territorial disputes in the South and East China Seas, regularly putting the PLA’s naval strength on display as state-owned interests emphasize oil and gas prospects in the region. As tensions between China and geopolitical neighbors have been heating up, The U.S. has pointed criticism at Beijing’s hawkish posturing and unwillingness to cooperate with international calls for UN arbitration. Amid this strained backdrop, Chuck Hagel embarked on his first trip to China as the U.S. Secretary of Defense, where he became the first foreign diplomat to inspect the Liaoning, China’s aircraft carrier. Reuters reports:

[…] “We didn’t see every space aboard the ship. But, yes, we felt this was an honest, genuine effort to be open about this brand new capability that they’re trying to develop,” said one U.S. official, speaking on condition of anonymity.

The official said Hagel was the first official visitor from outside China to be allowed on board the Liaoning, although that could not be immediately confirmed.

[…] “It’s a sign of openness, of sincerity, that China has nothing to hide and wants to improve military relations with the United States,” said Ni Lexiong, a naval expert at the Shanghai University of Political Science and Law.

[…] Chinese security experts said Beijing could be trying to quell U.S. criticism that it was not transparent about its military modernization, which Pentagon officials suspect is aimed at countering U.S. military capabilities. [Source]

If the invite to board the Liaoning was intended to signal a desire for improved relations, the disagreements between Secretary Hagel and his Chinese counterpart that came up in subsequent meetings emphasized just how much room for improvement exists. The New York Times reports on Hagel’s meeting with Chang Wanquan, China’s Minister of Defense:

While both men sought to present their meetings as constructive, they espoused divergent views on a number of issues, particularly the territorial dispute in the East China Sea, and a similar dispute between China and the Philippines in the South China Sea.

At one point, Mr. Hagel appeared impatient, wagging his finger. “The Philippines and Japan are longtime allies of the United States,” he said. “We have mutual self-defense treaties with each of those countries” he continued, adding that the United States was “fully committed to those treaty obligations.”

[…] The exchange punctuated a visit that American defense officials had sought to present as a long-awaited deepening of military relations between the two countries. On Monday, Mr. Hagel became the first foreign dignitary allowed on board a Chinese aircraft carrier, and on Tuesday the United States and China announced a series of modest steps toward improving communications.

But there appeared to be no closing of the gaps on more contentious issues.

Mr. Hagel, for instance, called on China to be more open about its cyberwarfare capabilities, which American officials have said Beijing uses for commercial espionage. […] [Source]

While touring Asia last October, Hagel was sure to highlight Washington’s continued commitment to a diplomatic and military policy shift towards Asia that remains unpopular in Beijing. The Wall Street Journal notes that Chang criticized the U.S. “pivot” during his meeting with Hagel, and reports on the U.S. defense secretary’s visit to a military school later in the day:

[Defense Minister Chang] pushed back against America’s plans to shift more military resources to the region—a move widely seen in Beijing as an attempt to contain China’s expansionist aims.

China “can never be contained,” Gen. Chang told reporters during a one-hour news conference at the defense ministry with Mr. Hagel standing by his side.

[…] The divide re-emerged later in the day when Mr. Hagel trumpeted the new chapter in military relations in a speech to 150 Chinese military officers. Mr. Hagel diverged from his prepared remarks several times to cut the most pointed barbs at China and argued that “great powers must resolve their disputes peacefully.”

[…] Chinese officers questioning Mr. Hagel accused the U.S. of stoking tensions in the region by backing China’s rivals and trying to curb the country’s influence.

“The American rebalance to Asia-Pacific is not to contain China,” Mr. Hagel said in response to one skeptical officer. [Source]

For more on maritime disputes in the East and South China Seas or on relations with the U.S., see prior CDT coverage.