U.S. Weighs In on South and East China Sea Disputes 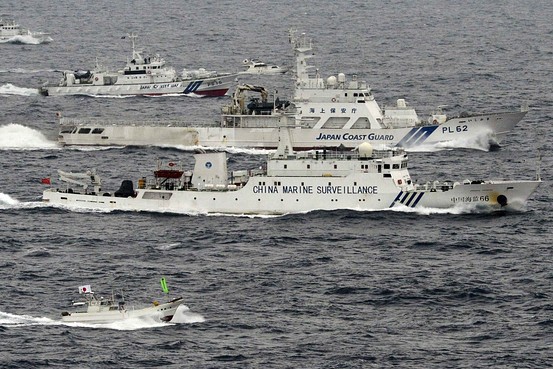 Since the Xi administration came to power in 2012, China has become more assertive about longstanding territorial disputes in the South and East China Seas, regularly showing off the extent of the PLA’s naval power as China’s state-owned interests stress the potential for gas and oil exploration in the maritime regions. On Tuesday, Philippine President Aquino called on the international community to help his country in resisting Chinese claims in the South China Sea. The New York Times notes the divisive historical reference chosen by Aquino:

President Benigno S. Aquino III called on Tuesday for nations around the world to do more to support the Philippines in resisting China’s assertive claims to the seas near his country, drawing a comparison to the West’s failure to support Czechoslovakia against Hitler’s demands for Czech land in 1938.

Like Czechoslovakia, the Philippines faces demands to surrender territory piecemeal to a much stronger foreign power and needs more robust foreign support for the rule of international law if it is to resist, President Aquino said in a 90-minute interview in the wood-paneled music room of the presidential palace.

“If we say yes to something we believe is wrong now, what guarantee is there that the wrong will not be further exacerbated down the line?” he said. He later added, “At what point do you say, ‘Enough is enough’? Well, the world has to say it — remember that the Sudetenland was given in an attempt to appease Hitler to prevent World War II.”

[…] Mr. Aquino’s remarks are among the strongest indications yet of alarm among Asian heads of state about China’s military buildup and territorial ambitions, and the second time in recent weeks that an Asian leader has volunteered a comparison to the prelude to world wars. [Source]

Last month from Davos, as ever-tense Sino-Japanese relations were mounting, Japanese Prime Minister Shinzo Abe also chose to to make a reference to past diplomatic tensions that preceded world war, and China reacted strongly. Likewise, China responded to Aquino’s comment with vitriol. From a Xinhua commentary:

Philippine President Benigno S. Aquino III, who has taken an inflammatory approach while dealing with maritime disputes with China, has never been a great candidate for a wise statesman in the region.

But his latest reported attack against China, in which he senselessly compared his northern neighbor to the Nazi Germany, exposed his true color as an amateurish politician who was ignorant both of history and reality.

He also joined the ranks of disgraced Japanese Prime Minister Shinzo Abe, who created great controversy after comparing Japan-China relations to those between the United Kingdom and Germany in the run-up to the First World War last month at the annual World Economic Forum in Switzerland.

For starters, China’s claims of sovereignty in the South China Sea has a sound historical foundation. […] [Source]

Last year, the Philippines was one of five countries to call for UN arbitration into disputed South China Sea claims, a process with which China refused to cooperate. Yesterday, a top US diplomat pointed criticism at China‘s claims and unwillingness to solve disputes according to international law. From the BBC:

[…] “There are growing concerns that this pattern of behaviour in the South China Sea reflects incremental effort by China to assert control over the area… despite objections of its neighbours,” Mr Russel told a congressional committee.

“Any Chinese claim to maritime rights not based on claimed land features would be inconsistent with international law,” he said.

The US says it does not take stances on territorial disputes in Asia. [Source]

The U.S. expressed disapproval after China announced a new Air Defense Identification Zone over disputed areas in the East China Sea, and China countered with several moves that have been interpreted as hawkish warnings to the U.S. Amid a debate as to what role the U.S. should play in Asian maritime disputes and as China engages in rhetorical battle with leaders like Abe and Aquino, a top U.S. navy official called for peaceful multilateral dialogue. The Wall Street Journal reports:

With the U.S. under growing pressure to help lower tensions in East Asia as its allies become more enmeshed in territorial disputes with China, the top American naval officer in the Pacific offered some hints on how the U.S. may play that role.

In a telephone conference with reporters Wednesday under the heading “The U.S. Commitment to the Rebalance — U.S. Security Partnerships in Asia,” during a visit to Japan, Adm. Samuel Locklear argued for a multilateral approach to solving disputes in the East China and South China seas, calling for a dialogue among friendly nations for this purpose.

“We hope that the leadership of all countries in these regions will come together and will have a dialogue in a peaceful setting to be able to reach a consensus and conclusion,” he told reporters.