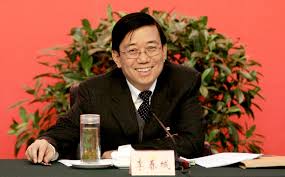 In December of 2012 an investigation into then deputy party secretary of Sichuan Li Chuncheng was launched, marking the beginning of Xi Jinping’s ongoing hunt for corrupt “tigers.” Last week Li was expelled from the Party and handed official charges, making him the most recent high-ranked cadre with links to embattled former security chief Zhou Yongkang to be indicted. Alongside standard corruption allegations—taking bribes, abusing official capacity, engaging in “morally degenerate” activities—Li was also accused of “carrying out superstitious acts.” Caixin reports:

The Central Discipline Inspection Commission (CDIC) said on April 29 that the case of Li Chuncheng, the province’s former deputy party secretary had been passed to prosecutors for criminal investigation. Li is accused of taking bribes, abusing his position, “morally degenerate” activities and carrying out superstitious acts. Li, who has been under investigation by the CDIC since December 2012, was removed from his public positions and expelled from the party, the CDIC said. [Source]

Li is believed to have paid some 10 million yuan on consultations with a fengshui master ahead of moving his ancestral family tomb. This master, Cao Yongzheng, is also believed to have ties to Zhou Yongkang. An Caixin report which preceded Li’s recent sacking profiled Cao, also known as the “Xinjiang Sage”:

Cao Yongzheng was born in 1959 in Qingdao, in the eastern province of Shandong, but grew up in Xinjiang. He graduated from Xinjiang University in 1982 and later worked as a teacher and editor. Then in 1998 he started his own businesses.

In the 1990s, Cao gained fame for purportedly having unusual abilities that were widely reported in state media. An article published by the official People’s Daily in October 1994 said Cao could treat incurable diseases and tell people’s fortunes, abilities that helped him garner a circle of followers that included celebrities and officials.

A source close to Cao said he had a close relationship with Li Chuncheng, a former deputy Communist Party secretary of Sichuan, and Guo Yongxiang, a former vice governor of the province. Both Li and Guo have been investigated by the Central Discipline Inspection Commission since last year.

The source said Cao is close to Zhou Bin, the son of a former top leader. Zhou is currently embroiled in a corruption investigation.

A Beijing businessman said that Cao has very strong connections with high-level officials. In 2011, Cao introduced him to a senior official at the party’s Central Politics and Law Committee, which oversees the country’s public security matters. […] [Source]

Li isn’t the only one official whose superstition has ended up in public display. A report from the South China Morning Post summarizes a recent spike in state media coverage of “feudal” and “superstitious” practices among Chinese politicians:

[Xinhua reported Of former Shaoguan security chief Ye Shuyang that on…]  the night before he was arrested [for bribery] in 2008 he went to an adviser to have his fortune read.

Ye also went to visit monks on Wutai mountain in Shanxi province while he was studying at the Central Party School to forecast how his career was likely to go.

[…] The former propaganda chief in Chongqing, Zhang Zonghai, once spent 400,000 yuan for the right to be the first to offer incense at a Buddhist temple at the start of the Lunar New Year, Xinhua reported.

A former provincial police chief in Guangdong also advised that the front entrance to the Asia International Hotel in Guangzhou be changed to resemble a shield so it could deflect the bad fung shui of a television broadcasting building nearby, a source who asked not to be named said.

The China Youth Daily said in a commentary that Li’s case was just the tip of the iceberg and many officials resort to superstition not for any spiritual reasons, but because it might help them get rich. […] [Source]

The Sydney Morning Herald notes that PLA general Gu Junshan, indicted in April after a lengthy probe revealed an enormous cache of now confiscated corruption spoils, had also been in possession of a spiritual keepsake he believed would shield him from the consequences of his corruption—a small piece of expensive mahogany (in Chinese 桃花心木 táohuāxīnmù, the first character of which is pronounced the same as the character for escape, 逃 táo). The report goes on to quote a corruption expert who believes that superstition is rising along with corruption in elite Chinese politics:

[…] A 2007 report found more than half of county-level Communist Party officials in China believed in  fortune telling, face reading, astrology and dream interpreting.

But Lin Zhe, an anti-corruption expert at the Central Party School, which trains party cadres, says the resurgence of  feng shui and other superstitions within the party was intrinsically linked to the growth in corruption.

“In the late 1970s and early 1980s this was less of a trend among cadres. But as corruption grew, superstition did as well,” Professor Lin told Fairfax Media. “Corrupt officials live an extremely uneasy life, and try to avoid misfortune by begging for mercy from gods and Buddha.

“Those who are clean and open-hearted won’t be like this; only those whose minds are dark and dirty, and have lost control of their futures, would resort to this.” [Source]

What appears to be a new crackdown on superstition in the Party will surely impact Chinese soothsayers and shamans, who AFP’s Tom Hancock reports are already seeing a declining customer base as more of the population move into cities amid continued urbanization.