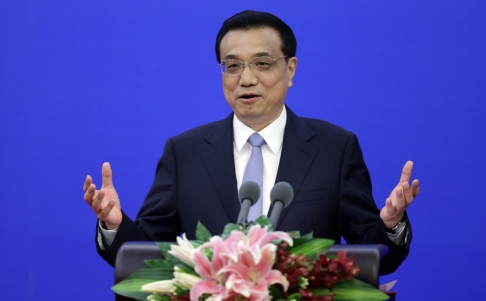 Having promised to restructure China’s economy in his economic report at the Two Sessions meeting in March, Premier Li Keqiang is struggling to implement his reform agenda in the face of powerful local interests, Wang Xiangwei writes at South China Morning Post:

According to mainland media reports, Li chaired at least two cabinet meetings over the past two weeks to focus on ways to streamline and delegate government regulatory powers.

At one meeting, on May 30, Li reportedly pounded the table as he blasted local officials for inertia in carrying out central government directives.

He accused departments of micromanaging the economy and wasting time and resources examining and approving projects and deals that were entirely commercial matters unrelated to national security or strategic industries.

Li reportedly lamented the long-standing problem vexing mainland leaders: that central government directives never make it outside Zhongnanhai, the headquarters of Chinese leaders, meaning they are either ignored by local authorities or twisted to suit their needs. [Source]

The official website ran a rare summary of the premier’s talk during the State Council meeting on Friday. In the piece, titled “The State Council would never release empty documents”, Li castigated local officials for not doing more to carry out directives from the top authorities.

“Many government officials hold the belief that ‘doing nothing is better than doing something wrong’,” Li was quoted as saying. “Such mediocre and slothful management is also a type of corruption, because it is irresponsible to the people and the country.”

The article said Li made his remarks “with special emphasis” and “shook his fist”.

Li said such official inaction had weakened the effect of the decisions made by the top authorities, and that the State Council would conduct comprehensive inspections of local governments and departments to make sure every policy was implemented.

“The inspections cannot simply go through the motions,” Li said, adding each directive “must get through to the grass roots”. [Source]