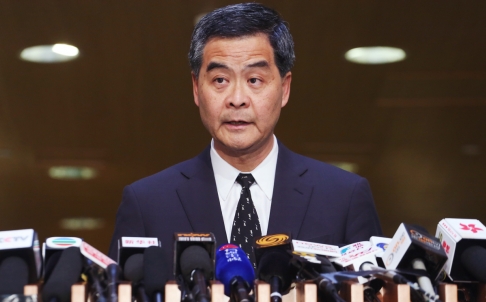 All websites manage commentary and do not hype the article “CY Leung Disagrees With Global Times Editorial.” (June 26, 2014)

On Monday, as the tally in Hong Kong’s unofficial referendum on electoral reform was reaching 700,000 participants, state-run newspaper the Global Times castigated the poll with an editorial titled “Many Participate in Illegal Hong Kong Referendum, But It’s No Match for [China’s] 1.3 Billion” [《香港非法公投人再多，也没13亿人多》.] Chief Executive of the Executive Council of Hong Kong CY Leung publicly expressed disagreement with the Global Times’ analysis of the situation in Hong Kong. The South China Morning Post reports:

In a rare example of a top Hong Kong official not following Beijing’s script, Chief Executive Leung Chun-ying yesterday said he disagreed with an editorial in the state-run Global Times newspaper which described the enormous turnout for Occupy Central’s reform poll as “no match” for the 1.3 billion population of China.

Leung, who went on leave from yesterday until Friday, said it was wrong to put “the people of Hong Kong and China on confronting sides”.

In a strongly worded editorial published on Monday, the Global Timeswarned that since “the Basic Law reflects the will of the whole nation … more than 1.3 billion people have the right to speak on Hong Kong’s political reform”.

Leung said that “no matter how many people voted”, and no matter whether the number was “inflated”, the majority of residents who took part were expressing their wish to elect the city’s leader by universal suffrage in 2017.

The Global Times described the Occupy poll as “illegal”, but Leung clarified that the people who voted would face no criminal liability. […] [Source]

CY Leung did go on to say that the called-for electoral reforms were not protected by the Hong Kong Basic Law. Netizen speculation that Leung, who assumed office in 2012, is a closeted member of the Chinese Communist Party has earned him the nickname “Secretary Leung” (梁书记).

The ten-day unofficial referendum has been the topic of many recent Directives from the Ministry of Truth. China’s State Council Information Office earlier ordered the deletion of any and all news on the poll, and asked television stations in Guangdong Province to cut signal on television programs coming from Hong Kong. More recently, media authorities asked outlets to reprint state media reports alleging ties between Hong Kong separatism and U.S. government agencies.

The poll comes ahead of the July 1 anniversary of the 1997 handover of the semi-autonomous region, which has seen mass protest rallies each year since the handover. Many terms related to Hong Kong protest are currently blocked on Weibo.