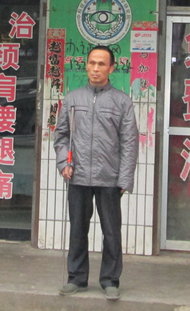 The announcement that this year’s fiercely competitive gaokao university entrance exams would be made accessible to the blind was hailed as a breakthrough. But after performing poorly in the test itself, one of the new gaokao candidates has been widely attacked for letting down other blind people and wasting state resources. From Didi Kirsten Tatlow at The New York Times:

“It went badly,” he said by telephone from his home in Zhumadian in Henan Province on Tuesday. Then he hung up, apparently too upset to say more.

Chinese news media have been abuzz with the tale of Mr. Li, 46, who reportedly handed in mostly blank papers after the two-day examination last Saturday and Sunday taken by about 9 million high school students, unable to cope with the form of Braille it was presented in. Many people have been deeply unsympathetic, said his friend and supporter Huang Rui, a lawyer at the Boyang Law Firm in Zhengzhou, the provincial capital of Henan, and a disabled rights advocate.

[…] “Chinese people don’t look at things from a rights point of view. They look for the result. And a lot of people feel he’s made blind people lose face, including blind rights activists.[“]

[…] Perhaps presaging Mr. Li’s experience, Mr. Huang warned at the time that it was good that the government was finally offering blind people an opportunity to take the examination, but that with the entire educational system for the blind “a blank page,” it was only the beginning of much-needed change to enable them to truly participate in society. [Source]

Read more about educational barriers for China’s disabled via CDT.