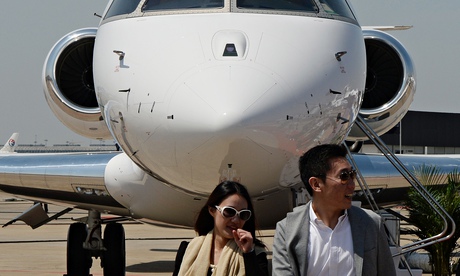 About one percent of Chinese households own one-third of the nation’s wealth, raising concerns about income inequality in the world’s most populous country, according to a study by Peking University.

Chinese households on average had a net worth of 439,000 yuan (about 71,000 US dollars) in 2012, up 17 percent from the 2010 level, the university’s Institute of Social Science Survey said Friday in its latest report on China’s livelihood development.

However, income inequality rose rapidly during the period, the report said, as the top one percent of Chinese households held more than one-third of the nation’s wealth, while 25 percent of households at the bottom owned only 1 percent of the country’s property value. [Source]

Jonathan Kaiman at The Guardian notes that China’s Gini coefficient for household wealth had reportedly jumped to 0.73 by 2012 alongside an increase in overall national wealth.

[The report] says the country’s Gini coefficient, a widely used indicator of economic inequality, has grown sharply over the past two decades.

According to some analysts, societies that have a Gini coefficient of more than 0.40 are at increased risk of widespread social unrest. Data from the OECD gives the US the highest Gini coefficient in the G7, after taxes and transfers, at 0.39, followed by the UK at 0.34 and Italy at 0.32. [Source]

The extent to which economic inequality threatens social stability in China is disputed. Other reports have shown China’s Gini coefficient for income declining from a 2008 peak, prompting accusations that the figures had been engineered. In any case, the figure is not a definitive or comprehensive measure of inequality. At Bloomberg Businessweek, Christina Larson compares China’s 1% with America’s, and finds that while China may be more unequal by some measures, the US has an even greater percentage of wealth concentrated in the hands of its wealthiest few.

But how do China’s rich stack up against America’s? The U.S. Internal Revenue Service analyzes income, not household net wealth, and in 2012, America’s richest 1 percent took home 19.3 percent of household income. But incomes rose almost 20 percent for the top 1 percent, whereas they inched up just 1 percent for the bottom 99 percent.

Recently, economists Emmanuel Saez of the University of California at Berkeley and Gabriel Zucman of the London School of Economics estimated the distribution of household wealth in the U.S. They calculated “how much property different strata of society owned by looking at the income that was generated by that property,” as my colleague Peter Coy reported. The richest 1 percent of Americans, they found, control 40 percent of the country’s wealth, and the top 0.1 percent control more than a fifth—which would mean wealth in the U.S. is still more concentrated than in China. [Source]