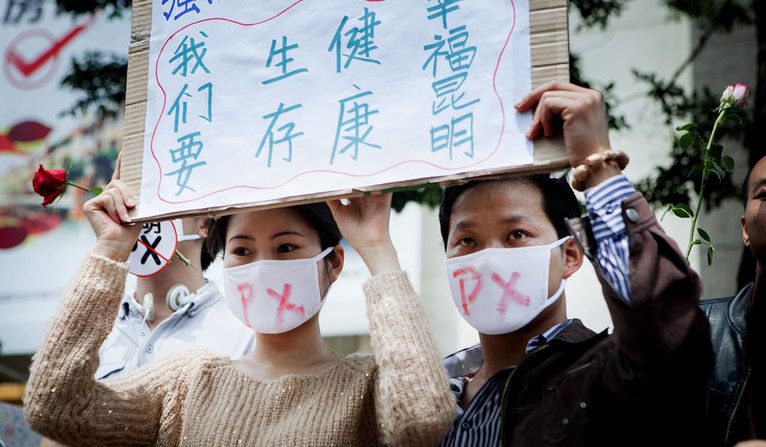 At Marketplace, Rob Schmitz reports police obstruction and intimidation in Chengdu, where he was following up on major (and unsuccessful) protests last year against a planned PX plant.

Last year, many here among the city’s 14 million residents planned a weekend public demonstration to protest the plant. When the local government found out, police detained organizers, sent out text messages warning people to stay inside, and the government required people to work on the Saturday of the protest, forcing high school and university students to remain in class through the weekend.

Officials are still paranoid– within minutes of arriving in Chengdu, I call a source who had agreed to talk with me about how the pollution affects her family. She abruptly cancels our interview – she’s being interrogated by police officers who had intercepted our emails and text messages. The next day, I hire a driver to take me to Pengzhou, the site of the petrochemical plant. It’s a refinery that’s as large as the nearby city. In a small village in the plant’s shadow, I stop to talk to a farmer. “My home was destroyed for the plant last August,” a woman tells me, “The sky here is always polluted now. The plant has had a huge impact on our health.”

Before I can get her name, a man pulls up beside me on a motorcycle and asks me what I’m doing. He glares at the woman and she dashes off.

I tell him I’m a journalist and I’m talking to people about pollution. “There’s no pollution here,” he says. [Source]

Reuters’ Alexandra Harney reports another effort to stifle information on pollution in Dapu, Hunan, where local authorities have offered medicine and milk to counteract the effects of lead exposure if parents surrender blood test results. Township government head Su Genlin prompted widespread ridicule and a subsequent censorship directive last month after suggesting that the exposure may have come about from chewing pencils.

After a test showed farmer Zhao Heping’s toddler grandson had high levels of lead in his blood two years ago, local officials in China’s Hunan province offered the child medicine, he says – and milk. In return, Zhao says, officials asked that he hand over his grandson’s blood test results.

Zhao was not alone. Eight residents of Dapu, a rural town of about 62,000 dotted with smelters and chemical plants, say families of children diagnosed with lead exposure were offered milk, but only if they surrendered their test results. The milk, residents recall officials saying, would flush the lead out of the children’s bodies.

[…] Allegations by villagers of the crude attempts by local officials to cover up the health effects of the environmental damage in Dapu by offering milk for medical records underscores the challenges China faces in waging the “war on pollution” premier Li Keqiang announced in March.

[…] “They slap you on the face, then they give you candy. That’s how the government operates,” said Li Wanming, a resident whose grandchildren had elevated blood lead levels. [Source]

Lead poisoning can irreversibly impair childrens’ mental and physical development. This and other forms of contamination were covered in a recently completed three-part series on soil pollution by He Guangwei at chinadialogue and Yale Environment 360.

The reports provided the scientific basis for setting new cross-border targets in emission cuts for next year and 2020, and for enhancing an air-quality monitoring network, a department spokesman said.

But Hong Kong had a binding agreement with Guangdong not to release the reports, which contained unspecified sensitive information, he said.

“The two studies were conducted within the region, which contained confidential information collected in the economic zone of [the Pearl River Delta]. Our Guangdong counterparts considered it inappropriate to disclose such information.”

[…] In Hong Kong, Democratic Party lawmaker Wu Chi-wai said there was no justification for holding back the reports, which were already three years old.

“Everything about the mainland is confidential or sensitive. If that’s the case, we won’t be able to achieve anything on anything involving the mainland,” he said. [Source]

There has, though, been a wider trend toward more transparency over air quality data, as well as improvements on other fronts. Marketplace’s Rob Schmitz addressed both this progress and the local government recalcitrance that limits it on Tuesday:

[…] Zhou [Xizhou, director at IHS Energy in Beijing] says there is good news on the horizon. “What’s encouraging being in the energy sector is that we are seeing unprecedented actions and determination to address this issue. A part of me wishes that this will be China’s ‘Silent Spring’ Rachel Carson moment.”

China’s top-down authoritarian regime may inspire hope that China could clean up its air with a few snaps of its leaders’ fingers. But in China, central power has limits – local governments in China often disregard new mandates and laws handed down from the Beijing because there’s often no funding to implement them. “China’s local governments have no motivation at all to deal with environmental problems unless they make money,” says Peking University Professor Xu Jintao. “That’s why I think a pollution tax would work. If some of that revenue goes to fund the local government, they’ll quickly help solve this problem.” [Source]