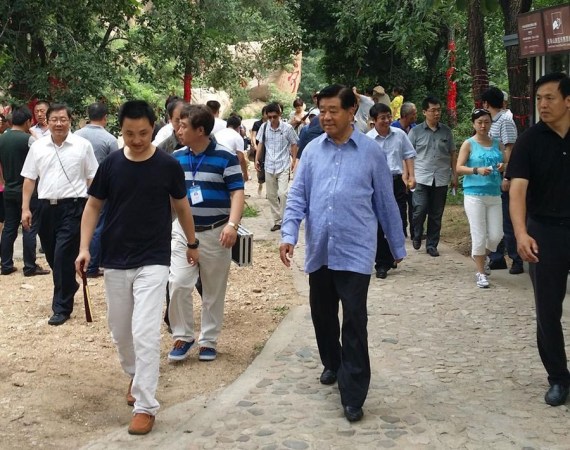 A rumor that Jia Qinglin is undergoing a corruption investigation has been circulating online. This photo opportunity seems designed to disprove that rumor. The brief article opens:

Netizen “Wu Hongbo” wrote on Weibo, “This morning I saw Jia Qinglin at the Changshou Mountain Scenic Area in Qinhuangdao, an amiable man who shares my home province of Heibei.”

There appears to be no Sina Weibo user with the username 吴洪波, and a search for the text of the post does not return an original post, but only the text of the article. A post by 谢流石 adds that the post appeared on Tencent Weibo, which does have a user named  吴洪波–but the quoted text is still absent from his posts.

There are many mountains in China named “Longevity” (长寿 Chángshòu). This one happens to be situated in the same district at Beidaihe, the site of the central leadership’s annual summer retreat.