A roundup of online political cartoons reflecting headlines from the week of August 3. Click any image to launch the slideshow view.

On Saturday, a factory explosion in Jiangsu killed 75 workers, raising concerns about the working conditions facing many of China’s migrant workers. A day later, a magnitude 6.1 earthquake wreaked havoc on poverty-stricken Ludian County, Yunnan, claiming at least 589 lives. With these critical stories of devastation deserving the media’s full attention, several state media organizations instead chose to highlight another story.

On August 4, state broadcaster CCTV aired 23-year-old Guo Meimei confessing to working as a call girl and involvement in a World Cup Gambling Ring [Chinese]. In 2011, Guo achieved infamy after posting several wealth-flaunting photos to a Weibo account crediting her as a general manager at the Red Cross Society of China. While her claim to be a Red Cross employee was debunked, it served to direct public scorn towards the organization in a society where the amount of charity donations have failed to keep up with the overall accumulation of wealth, partly due to a trust deficit. Distrust of the organization has lingered, and Red Cross has since been implicated in several scandals over misused funds.

The government ordered media organizations nationwide to draw attention to state media’s coverage of Guo. The choice to crucify the notoriously attention hungry young woman instead of cover the weekend’s many deaths prompted netizen speculation that the goal was either distraction or a massive PR campaign for Red Cross. Later, the government ordered media to cool down coverage of Guo. 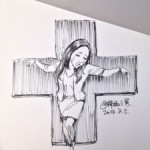 Guo Meimei, seen here in detention, holds a sign displaying her crime: “raising the price of prostitutes.” In her televised confession, Guo admitted that she had flown to meet a man who offered her 400,000 yuan for sex. (Yuanzi/原子漫画) 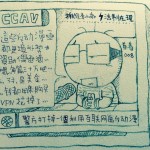 Cartoonist Xiao Guai (小乖) depicts himself in Guo’s shoes, delivering a televised confession on CCAV. “These reactionary cartoons were all financed from abroad… Yes, 300,000 per strip… Yea, in U.S. dollars… I used all that money to pay for VPN services…” Guo Meimei’s is the latest in a series of televised confessions aired on CCTV. (Xiao Guai/小乖) 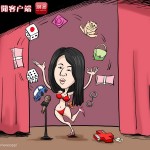 Guo’s CCTV confession is presented as an encore performance in her long-running quest for attention. While juggling paraphernalia related to her confessed gambling and sex work, the already damaged reputation of the Red Cross is dropped and further bruised. (Dashixiong/大尸凶)