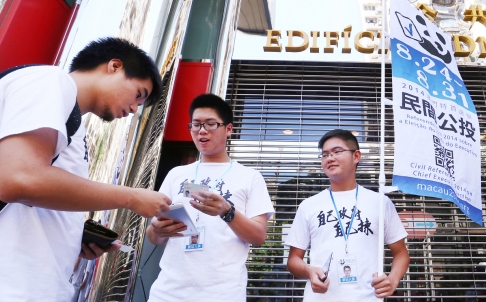 Officers raided all five referendum polling stations within hours of the launch of the seven-day ballot, which asked locals if they had confidence in Chief Executive Dr Fernando Chui Sai-on and wanted universal suffrage at the next election.

The detained included Scott Chiang Meng-hin, a key member of the New Macau Association, the most prominent democratic group in the former Portuguese enclave. Also detained was Jason Chao Teng-hei – leader of Open Macau Society, co-organisers of the poll with Macau Conscience and Macau Youth Dynamics.

[…] Chui repeated his stance yesterday that the activists’ poll “does not comply with the Basic Law”. Beijing has also denounced the poll as illegal. [Source]

So far, more than 5,000 Macau residents have participated in the poll, which also allows residents to vote online.

Mr. Chao said that he and four other volunteers were arrested on charges of “qualified disobedience” and subsequently released. In a joint press conference with police yesterday, Yang Chongwei, deputy coordinator of the Macau Office for Personal Data Protection, said the arrests took place because “it is inherently illegitimate for personal information to be collected and handled” by poll organizers.

[…] To verify their identities, the poll collected each voter’s permanent identity card number and phone number. A similar system was used for Hong Kong’s unofficial referendum, which attracted over 780,000 votes. [Source]

Earlier this month, an associate professor of political science at the University of Macau was reportedly sacked due to his involvement with pro-democracy activism and participation in the New Macau Association.