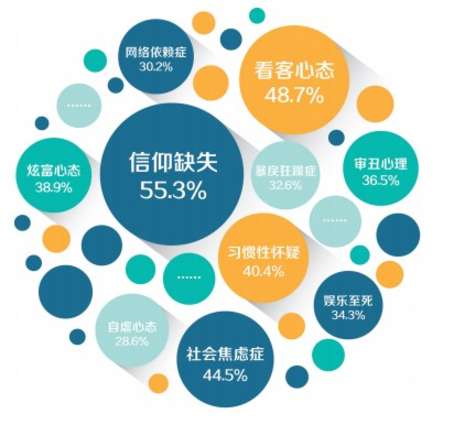 People’s Tribune, a magazine published by the official People’s Daily, released a survey on social ills afflicting contemporary China. The Wall Street Journal summarizes the results, which found a lack of “credibility” among officials to be the gravest public concern.

Although the survey showed ten top-ranking social ills, People’s Tribune asked about 13 problems in total. “Self-abuse,” a sort of masochism involving “criticism of the Communist Party,” was also highlighted as a major problem. From NetEase [Chinese]:

The People’s Tribune Questionnaire Center recently put together a list of the 13 biggest social ills [in Chinese society]. One of the issues mentioned, “self-abuse,” refers to criticism of the Communist Party—and those who benefit most from within the system are criticizing the party the hardest. “Lack of faith,” “spectator mentality,” and “social anxiety disorder” ranked as China’s top three current social ills.

[…] In general, Chinese society has been functioning very well—a wave of anti-corruption is sweeping over the land, society has taken the eight-point guidelines [for official conduct] deeply to heart, China’s economy continues to develop steadily, and life in general is standardized and orderly. However, because of the incredibly dramatic societal transformation that China is going through, all of the overlapping aspects of China’s social structure, lifestyles, modes of behavior and values are changing. Some maladjustment and disharmony is inevitable. This has caused social ills to become prominent issues during this modernization transformation process. Social ills are social abnormalities that differ from China’s social norms or healthy state; they are an overall summation of the problems, contradictions, conflicts, confusion, and other phenomena present in society. Through in-depth surveys, sifting, and refining, the People’s Tribune Questionnaire Center has put together the following preliminary list of the 13 most commonly reflected social ills.

Death by Entertainment: Worship of personal hedonism, willingness to became a slave to entertainment.

Spectator Mentality: Ah Q-style apathy, numbness and spectatorship; following the life philosophy that “if it doesn’t concern me, I won’t be concerned with it.”

Habitual Suspicion: Overall suspicion due to both the lack of trust between people and the lack of sense of safety, caused by society’s trust crisis.

Appreciation for the Ugly: Scandal has become the hall pass for scandal mongers. The fake, evil, and ugly prevails. The more someone curses, the more popular he or she is.

Social Anxiety Disorder: Long-term stress and anxiety caused by work, life, taking care of the elderly, and other unpredictable issues.

Lack of faith: Crisis of faith and morality that exists with the diversification of values; moral deficit and moral default are magnified.

Violent Rage: Brutality and perverse cruelty; irritability and tendency to go to extremes, even becoming a danger to society.

Fear of Thinking: Parroting others, repeating others’ words; thoughtlessly going along with rumors or others’ opinions.

Internet Dependency: Addiction to the Internet and/or mobile media, resulting in dependency; becoming engulfed inside of virtual worlds, unable to pull oneself out.

Wealth Flaunting: Displaying, flaunting wealth; vanity; another manifestation of the inferiority complex. Flaunting in order to achieve a sense of satisfaction.

On ConsensusNet (共识网), netizens offered analysis of these social ills, pointing to the combination of authoritarianism and the free market:

前尘往事: What Chinese citizens have lost is political faith. All social ills originate from this.

不老的传说: I don’t know if I should believe the author’s conclusions or believe the “Three Confidences.” How are core values established? Is it by writing down 24 words? Or can they be cultivated like you say? Let’s not forget society’s role in one’s education. Baiting people during the Anti-Rightist movement, the rhetoric of the Great Leap Forward, the catastrophe of the Cultural Revolution, the split personality of our leaders’ public and private lives, etc., etc.… all this, at every moment, is forming the values of the people of China.

安然: These 10 big “social ills” are commonly known as “moral defeat, declining morale.” Trends come from the top and customs come from the bottom. Over the last ten-plus years of double-digit GDP growth, the country’s leaders were leading 1.3 billion people in singing “Towards money, towards power, towards money; our team marches towards corruption,” marching us all down the old capitalist road. Rampant official corruption, the polarization of society, the destruction of the environment, rising public grievances… a combination of the cruelty of capitalism and the power politics of socialism (the overall tax burden is at nearly 47%, yet social security programs are declining). What is society to do? These look like ills, but they’re really “powder kegs.”

安然’s point is well-taken, though exaggerated. According to the Heritage Foundation, China’s overall tax burden is 19% of GDP.

木文一: What are the root causes of these current social ills? Has the author thought about this? We have seen socioeconomic development, and people are rich now, but what about the political lives of the people? Political life means participation in politics—democratic management and democratic elections. But as soon as one brings up democracy, officials become silent. Why is this?