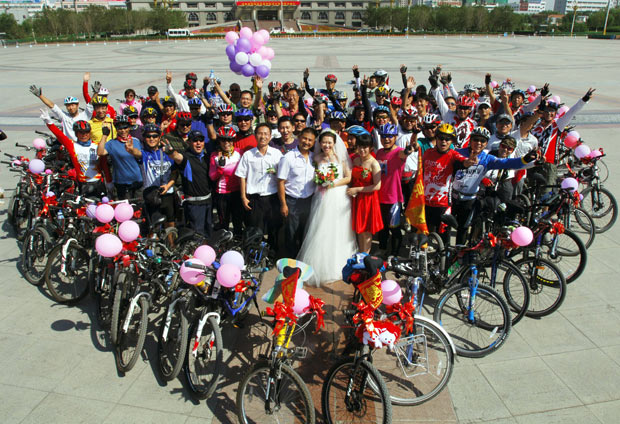 After reports on an official campaign encouraging marriage between ethnic Tibetans and Han in the Tibet Autonomous Region, a county in southern Xinjiang is offering a 10,000 yuan payment plan and other benefits to newly married inter-ethnic couples. From Edward Wong at the New York Times:

Last week, officials in Cherchen County, known as Qiemo in Chinese, began offering payments of 10,000 renminbi a year, or $1,600, for five years to newly married couples in which one member is Han and the other is from one of China’s 55 ethnic minorities. Official Chinese news reports this week said the payments were intended to help the couples invest in small businesses and to start families.

The couples also get priority consideration for housing or government jobs, as well as other benefits. Their households will receive as much as $3,200 a year in health care benefits. The children of these mixed marriages will have free education from kindergarten to the end of high school. Children attending vocational schools will receive almost $500 a year in tuition subsidies, and those attending university will get an annual tuition subsidy of $800.

The policy, which was announced on the county’s official website, is similar to initiatives in Tibet that promote interethnic marriage. In the announcement, the county director, Yasen Nasi’er, said that interethnic marriages are “an important step in the harmonious integration and development of all ethnicities.”

He called such marriages “positive energy” and a means by which Xinjiang can realize the “Chinese Dream,” an amorphous term popularized by President Xi Jinping. […] [Source]

Coverage from The Washington Post has more Xi’s vision of “inter-ethnic fusion”:

[…] Xi has also shifted policy toward a concept of “inter-ethnic fusion,” according to James Leibold, an expert on China’s ethnic policies who teaches at Melbourne’s La Trobe University. That is a move away from China’s long-standing idea of “separate but equal” ethnicities and toward a more American-style concept of a melting pot — or, in Xi’s own words, the binding together of China’s ethnic groups as tightly as the seeds in a pomegranate.

As well as encouraging more Han people to come to Xinjiang, Xi has said that he wants to see more of Xinjiang’s Muslim Uighur people move to other parts of China. […]

[…] Leibold warns that Xi’s new policy — along with stronger grass-roots surveillance and efforts to prevent women from wearing veils — is only likely to spark more competition between ethnic groups and more conflict, thanks to “deep-seated racism and cultural misunderstanding.” [Source]

The South China Morning Post quotes a Chinese academic who questions the efficacy of the cash rewards program:

Jiang Zhaoyong , a Beijing-based expert on ethnic affairs, said marriage between members of different ethnic groups in Xinjiang was very rare, and economic incentives would not be effective. “Most Uygurs only accept marriage within their ethnic and religious group. Those who marry Han usually choose to move out of Xinjiang to avoid tension,” Jiang said.

“There’s nothing wrong with encouraging communication and cultural integration between Uygur and Han, but I doubt that spending taxpayers’ money on a reward scheme to encourage mixed marriage would be the best way to do so,” he said. [Source]

A spike in violence in Xinjiang, a region where historical ethnic tensions have been rising in recent years, is being answered by a steadily escalating crackdown on terrorism. Amid this campaign, Edward Wong reported last week on an upcoming animated series about Xiang Fei (香妃), the “Fragrant Concubine,” (via CDT) a legendary Uyghur woman who became a consort of the Qianlong Emperor. Chinese and Uyghur retellings of the mythical concubine vary greatly—the former a romantic tale of inter-ethnic romance and national unity, and the latter a story of subjugation and resistance.