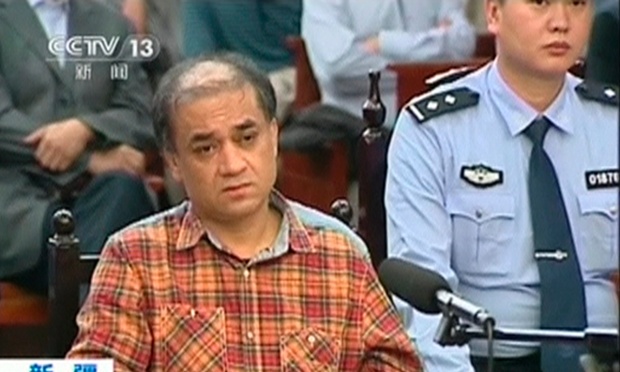 The Xinjiang high court […] rejected the scholar’s appeal against the conviction, and the verdict was delivered on Friday at a hearing held inside the Urumqi detention centre, in violation of normal judicial procedure, his two lawyers said. The hearing was set at short notice on a date in which both lawyers were unable to attend, Liu Xiayuan and Li Fangping said.

[…] Ilham Tohti has long been a critic of what he calls the systematic exclusion of Uighurs from the economic benefits brought to Xinjiang by migrants from China’s Han majority, and has sought to prevent the Turkic Uighur language and culture from being marginalised.

His sentence was the most severe in a decade handed down in China for illegal political speech and reflects the ruling Communist party’s unwillingness to tolerate free speech and criticism. The verdict drew condemnation from the US and the European Union. [Source]

This comes as Chinese authorities are engaged in an “unprecedented war on terror” in Xinjiang, where an escalation of violence has been blamed on separatists and religious extremists. Widely regarded as a moderate advocate for Uyghurs, Ilham Tohti has long opposed Xinjiang independence. Writer Wang Lixiong had earlier predicted that authorities may be aimed at clearing out the ideological middle ground: “The only conclusion is dark: it’s that they don’t want moderate Uighurs. Because if you have moderate Uighurs, then why aren’t you talking to them? So they wanted to get rid of him and then you can say to the West that there are no moderates and we’re fighting terrorists.” Following the verdict’s announcement in September, Wang commented on Twitter that China had created a Uyghur Nelson Mandela.

Yesterday, it was reported that jailed rights lawyer Pu Zhiqiang, already facing trial for “causing a disturbance” and “illegally obtaining personal information,” may be looking at the harsher charges of “inciting ethnic hatred” and “separatism” for a microblog post he made criticizing China’s Xinjiang policy.

For more on Ilham Tohti, see prior CDT coverage.