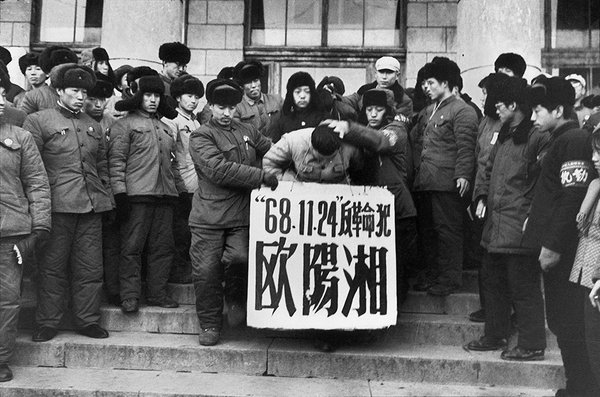 For the New York Review of Books, Ian Johnson continues his exploration of the journal Remembrance, an underground publication run out of Beijing and distributed by PDF. Johnson tells the story of Song Binbin, a former Red Guard leader who has been associated with the brutal murder of the principal of the Experimental High School Attached to Beijing Normal University, Bian Zhongyun. In an effort to clear her name, Song participated in a round table discussion which was published in Remembrance. Johnson reports:

Founded in 1917, it has been lavishly rebuilt over the past few years, with a sleek new gym, dining hall, and classrooms—a monument to a rising country. But to many Chinese people of a certain age, the Experimental High School Attached to Beijing Normal University conjures up another image—that of a group of fanatical girls torturing their vice-principal to death.

For years, the event has been of interest to foreign scholars of the Cultural Revolution; it is a Lord of the Flies story that has attracted academics investigating female violence, filmmakers trying to document the mindset of violent Red Guards, and researchers trying to piece together how many people were killed, by whom, and how. In China, the story is more veiled. In official accounts it is usually mentioned as an example of the chaos that the country should avoid, and it is heavily censored to conceal the fact that many of the young women were children of the Communist elite, and today are prominent members of society.

But this is changing, part of a broader movement intended to shift discussion of sensitive questions from the private into the public sphere. Led by samizdat publications like the online journal Remembrance,* accounts of violence—including the vice-principal’s killing—are being published and passionately debated. More remarkably, people are even apologizing publicly for their actions, setting off long-overdue discussions about how China should deal with its violent past, especially when many of the victims are dead. Is it best to forget, which the country has largely done, or is there merit in digging up the past? And is it possible to have a cathartic confrontation with the past in a country with no real public sphere?

[…] None of the apologies has touched a deeper nerve than one made earlier this year by a reluctant sixty-five-year-old woman—one of the girls who had stood by as her vice-principal was sadistically tortured to death. Song Binbin had been one of the school’s student leaders as the Cultural Revolution unfolded starting in May 1966. The daughter of a famous general, Song Renqiong, she participated in writing vitriolic “big character posters” denouncing the teachers and administrators of what was then an all-girls school. Taking their lead from China’s god-like leader, Mao Zedong, she and other classmates concentrated their attacks on authority figures, who Mao said had betrayed the Party. [Source]

Meanwhile, as some Chinese are coming to terms with their own history, the quotations of Mao Zedong are being remembered in a very different environment, on the upper east side of New York, in an exhibition titled, “Quotations From Chairman Mao: 50th Anniversary Exhibition, 1964-2014. From the Collection of Justin G. Schiller.” James Carter of the Los Angeles Review of Books blog writes:

There’s an irony to the fact that the very first page of the canonical collection of quotes by the Chairman is an excerpt from a 1948 speech, in which Mao stresses that without the leadership of the Communist Party “it is impossible to lead the working class and the broad masses of the people in defeating imperialism and its running dogs.” If those “running dogs” he had in mind have a native habitat, it would be Manhattan’s Upper East Side. The exhibition may be devoted to one of the most recognized icons of Communism, but it stands in a part of New York City dominated by sacred names of American capitalism: Park Avenue, Fifth Avenue, Trump Tower, Bloomingdale’s, Madison Avenue. This placement might seem appropriate, given China’s current embrace of state capitalism, but the show is a chance to see some remarkable artifacts from a different time in Chinese history, when leaders in Beijing promised to lead a revolution of proletarian struggle. [Source]

Read more about Song Binbin and other apologies made by former Red Guards, via CDT.