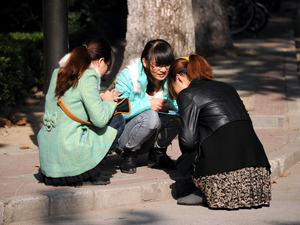 At Deutsche Presse-Agentur, Joanna Chiu reports Chinese students’ reactions to a spate of rhetoric against Western values and “smearing” of socialism in university education:

“They are trying to make us accept their fixed ideology,” says the 21-year-old who only wanted to be identified by his last name. “I really don’t like it.”

[…] “Studying only the culture of China cannot compare to being exposed to other cultures and learning from them,” said Isaac, an 18-year-old finance major in Beijing, who gave only his English name.

“It’s much too strict,” said a student from Liaoning province who did not want to be named. “The government should relax a little.”

[…] But the government’s harder line may not have the desired results, according to many students who spoke to dpa.

Those proficient in English said they plan to take free online courses offered by US schools such as Harvard, Berkeley and the Massachusetts Institute of Technology. [Source]

Chiu also quotes rights lawyer Mo Shaoping’s response to the recent call to arms by education minister Yuan Guiren: “how can he say something that makes no sense? Did Marxism not come from the West? … It is difficult to distinguish between knowledge that comes from the West and what is from the East.” Mo’s argument echoes one of three questions posed to Yuan last month by Shen Kui, former vice dean of Peking University Law School: “Let me ask Minister Yuan, would it be possible for you to clearly delineate the line between ‘Western values’ from ‘Chinese values’?” This prompted a defense of Yuan by CASS scholar Zhu Jidong, which a leaked propaganda directive ordered Chinese media to amplify. This week, Fei Chang Dao posted a selective translation of Zhu’s heated counterattack:

In his words and deeds Yuan Guiren has been doing as he is duty-bound to do, so why is he being attacked from all sides? There are many reason, but the most fundamental one is that those who are participating in the attacks have in recent years dared to unsheathe their swords to besiege ideological territory, and have not received the punishment that they should, which has made them increasingly brazen. Therefore, in order to get a handle over university ideology work, we must dare to remove obstacles, and make a determined effort to remove those teachers who would disseminate speech that attacks the Party or Socialism. Only in this way can we truly punish evil and promote good, and usher in a new springtime for university ideology work.

[… I]n the case of the three questions to Yuan Guiren, neither the law professor from a certain university nor the Big V professor at his school received the punishment they deserved for repeatedly launching verbal attacks on the Party and socialism, and have instead won fame and fortune. I fear this may have a malicious effect upon instructors at institutes of higher learning. […] It truly is the failure of certain people at relevant government agencies to do their jobs that has lead to these attackers becoming increasingly brazen. Therefore, relevant government agencies must severely investigate and prosecute these people and forces, and grab a few model examples of being on the wrong side and give them particularly harsh punishment. [Source]

China does not oppose the ideas of liberty, democracy, equality and human rights, which are among the core values of western culture. In fact, these concepts are included in the Constitution. However, China’s understanding of these concepts may differ to the West. [See examples via CDT.]

[…] History has told the Chinese that denying the leadership of the CPC and socialism leads to chaos and stagnation.

China has no right to criticize the culture or values of other countries, but it has the right to choose its own.

When slander directed toward the leadership of the CPC and smear campaigns against socialism confusing the young in universities, why can China not say no? [Source]