China: No Need for Open Internet? 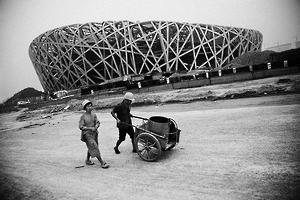 While state media has cited the “near flawless organization” of the Beijing Olympics in support of China’s bid for the 2022 Winter Games, critics have pointed out 2008’s broken promises on media freedom and other rights issues as cause for hesitation. Reuters’ Ben Blanchard reports one bid official’s claim that foreign attendees in 2022 would enjoy unfettered Internet access, but that the Chinese neither need nor want it:

Wang Hui, spokeswoman for the Beijing 2022 Olympic Winter Games Bid Committee, told a news briefing that China was an open country committed to having an open Internet.

“With our Weibo and WeChat, China’s 650 million (web users) can freely use these tools to exchange and receive information,” she said, referring to wildly popular Chinese social media tools which are subject to often quite strict government censorship.

[…] Foreign visitors, including the press, spectators or athletes, would get open Internet access in 2022, Wang added, without explaining how exactly this would work.

Reuters itself ran into the Great Firewall last week, with both its English and Chinese sites now inaccessible. The organization joins other blocked news sources including the BBC, Bloomberg, The New York Times, South China Morning Post, and The Wall Street Journal.

“If you are sitting in Beijing, what’s the problem?” asks Bill Bishop, China watcher and author of the Sinocism China newsletter in the latest episode of “On China.”

“You are still in power, you have 650 million Internet users, you have billions of dollars of economic value going to the Internet everyday, you’ve used the Internet to increase government transparency, investors love us and they can’t throw enough money at our companies that have more than half a trillion dollars in market capitalization,” says Bishop.

[…] It’s nailed the Jell-O. China has proven it can have its Great Firewall and enjoy great prosperity too.

Lokman Tsui, associate professor at the Chinese University of Hong Kong and former head of free expression at Google Asia-Pacific, says that most Chinese are happy with the status quo.

“Their lives have noticeably improved,” he says. “The model has worked so far.” [Source]

The shelter of a walled-off Internet may have helped Chinese tech firms, but many argue that it has economic costs elsewhere, hindering research and education, and impeding communication with clients and customers abroad. Even for tech companies, as Sina Weibo’s U.S. IPO filing last year explained, official controls bring heavy burdens and unpredictable dangers.

At Bloomberg Business this week, meanwhile, Stephen E Stapczynski and Ye Xie reported signs that China’s Internet boom may be starting to fade:

Half of the 14 Chinese dot-coms that debuted in the U.S. last year are now trading below their initial sale prices. Even Alibaba Group Holding Ltd., one of those still up in price, has dropped 28 percent from its record high in November. On average, the 14 Chinese shares are down 3.1 percent this year, compared with a 6.1 percent advance in the Nasdaq through March 20.

Investor confidence, so high when Alibaba brought its record $25 billion initial public offering to market last September, is being undermined now by a wave of poor earnings at Chinese technology companies. Those that went public last year including Weibo Corp., the microblogging service, and mobile dating app developer Momo Inc. have failed to deliver the revenue investors were expecting.

“The market is nervous,” Michael Wang, a strategist at Amiya Capital LLP in London, said by e-mail March 18. “Whether investors come back is questionable.” [Source]