Video Sites to Be Punished for Undesirable Anime 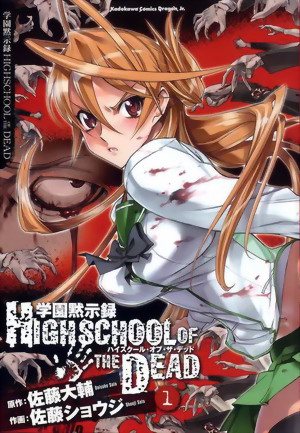 Seven video sharing websites will be investigated and punished for hosting animated series that “lure minors to delinquency and glamorize violence, pornography, and terrorist activities”中文, the Ministry of Culture announced on its website today [Chinese]. Major Internet companies including Baidu, Tencent, and Youku Tudou are among those implicated.

The Ministry of Culture cites three Japanese anime series as exemplars of the types of unlawful content targeted by censors: “Highschool of the Dead” edges towards pornography; “Blood-C” is full of severed limbs and splattering blood; and the young protagonists in “Terror in Resonance” “stage terrorist bombings, and even steal nuclear materials to make bombs, in order to avenge their country”中文.

An image purportedly of the Ministry of Culture’s blacklist has circulated on Weibo, including the titles of 29 anime. “Highschool of the Dead” and “Terror in Resonance” are both on the list.

The Chinese web portal Qianzhan published an editorial criticizing the censors for scapegoating Japanese cartoons in this latest sweep, arguing that a rating system for television shows and films would work better than wholesale bans, and that the government’s targeting of anime smacks of protectionism:

Let’s set aside the question of whether these anime fall under what the Ministry of Culture calls “violent terrorist content,” “flagrant dissemination of pornography, and harm to social mores.” Judging just from the homages to the resistance against Japan slapped together in the past few years, with plot devices such as defeating the “devils” with bare hands and the “devils” gang raping women, isn’t the Ministry of Culture biased in censoring “violent terrorist animations” but leaving these dramas alone?

Back to gruesome animations. It made the news when two children burned themselves reenacting a scene from the popular [Chinese] children’s show “Pleasant Goat and Big Big Wolf.” If only Japanese cartoons are censored and domestic ones are left alone, this will not solve the root of the negative influence violent cartoons have on children.

[…] Before, when SAPPRFT issued a “prohibition on American shows,” CCTV broadcast a cleaned-up version of “Big Bang Theory,” to the resounding scorn of viewers. Netizens asked one after another to “let it go.” Is the Ministry of Culture’s censoring of animations and websites this time around meant to clean up video or to vie for the market? Or could it be that they want to protect domestic shows? We have no way of knowing, but the effect of wiping out animations that are fine for adults, I’m afraid, is just the same as the effect of the shows themselves. [Chinese]

Paul Carsten at Reuters ties the crackdown on anime to the government’s “broader campaign to control Internet content,” including the recent distributed denial-of-service (DDoS) attack on the US-based code sharing site GitHub.