Celebrity CCTV host Bi Fujian found himself on the wrong end of public scrutiny this week when a video clip of him calling Mao Zedong a “son of a bitch” who caused people to “suffer bitterly” surfaced online. 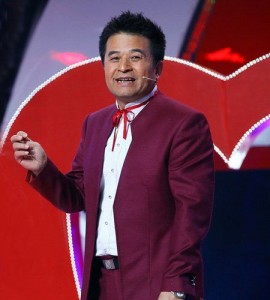 Taken at a private dinner, no one has stepped forward for filming Bi as he tipsily added barbed comments to an aria from one of the model operas of the Cultural Revolution for the chuckling group gathered around the table. Leftists attacked Bi, while the state broadcaster has suspended him. Bi apologized on Weibo last night for “creating a serious negative influence on society” with his words.

Supporters defend Bi’s right to speak his mind, particularly at a private gathering. Some point out that his comments on Mao, while crude, are also true, and that the backlash against Bi recalls the public denunciations at the heights of Mao’s rule. Chinese cartoonists reflect on the public shaming of Bi for what should have been off the record. Who was the Judas at dinner who pressed record on his phone?

Bi Fujian leading a collicky Mao by the hand. The arrow points to the child “raised by Bi” (毕养的 Bì yǎng de), which sounds nearly the same as “son of a bitch” (逼养的 bī yǎng de). (Artist: Rebel Pepper 变态辣椒)

A cartoon in the style of a Cultural Revolution propaganda poster declares, “Down with Bu Fujian! Smash the cultivator of darkness!” (Artist: Dashixiong 大尸凶)

“Old Bi” is now under investigation by CCTV and could face more serious consequences for the viral video than a temporary suspension from work. (Artist: Mingzi Chahua 明子插画)

Have the neo-leftists and state media inadvertently made a martyr of Bi? (Artist: Kuang Biao 邝飚)

In order to preserve their privacy, these diners have stowed their cell phones above the table and hidden their faces. Still, they whisper. The cartoon is titled “Banquet,” but the second character in the word is in quotations, suggesting an alternate name: “Bureau of Meals.” (Artist: Gouben 勾犇)