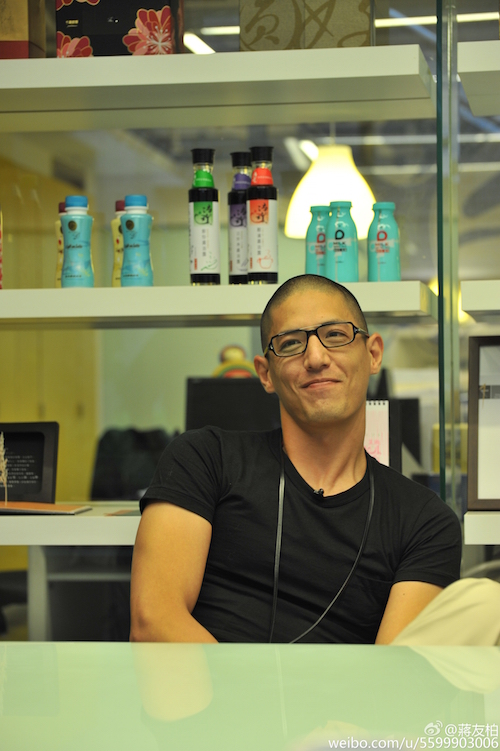 Demos Chiang, founder of the Taiwanese design company DEM Inc. and one of Chiang Kai-shek’s great grandsons, opened a verified Weibo account today. His first post, a simple “good morning” accompanied by a photo of himself with a subtle grin, went viral, and not just because of Chiang’s good looks. Commenters compared the handsome, accomplished Chiang to Mao’s only grandson, the portly Mao Xinyu. Some are also asking Chiang if he means to stage a “counter-attack against the mainland” (反攻大陆) to avenge the defeat of the Kuomintang by the Communists in 1949:

Dadaowuming- (@大道无名-): A simple “‘morning” has netizens falling over each other to prostrate themselves. The likes, reposts, and comments are flowing–this is the rhythm for a counter-attack on the mainland. Looks like your grandfather has plenty of people to take on his unfinished business.

Jihuashengyuzhidaoyuan (@计划生育指导员): When will you return with the army of the Republic?

Yudaye_ (@余大爷_): If the civil war of 65 years before were fought today, Mr. Chiang would definitely win, since these days it’s about looks.

It appears that all of the comments containing the phrase “counter-attack against the mainland” have been filtered by Sina. A message at the bottom of each page of comments states, “To avoid harassment, Weibo’s intelligent anti-spam system filters a portion of advertising users.” “Counter-attack against the mainland” is blocked from Weibo search results as of this posting. Taiwanese news outlets like Apple Daily and China Times have published low-resolution screenshots of some of the comments, but the shape of the offending phrase is discernible.

Still live are requests for Chiang to challenge Mao’s grandson, Mao Xinyu, to a handwriting battle. Mao Xinyu has been skewered online for his rotundity, lack of aptitude, and poor penmanship. In 2010, Mao Xinyu was promoted to the rank of major-general in the People’s Liberation Army. Then 39, he was the youngest person to hold this title, leading many scornful netizens to doubt that he earned it on his own merit.

Demos Chiang is not a politician, but he has spoken on political issues in Taiwan. In 2007, he questioned the Democratic Progressive Party’s “anti-Chiang” measures in a blog post, while acknowledging Taiwan’s autocratic past under the leadership of his great grandfather and grandfather. In 2012, Demos told an audience at a conference in Taipei that Taiwan’s government is “the most outdated brand,” unwilling to take risks and break norms.

While Demos runs a company and tests the drought-stricken waters of Weibo celebrity, his younger brother Andrew Chiang is serving a six-month prison sentence for posting violent threats to social media against his alma mater, the Taipei American School.