On Modi’s Journey to the East, Economy Likely to Be Focus 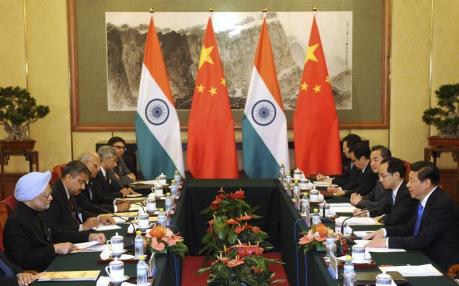 On May 14, Indian Prime Minister Narendra Modi will meet Xi Jinping in Xi’an. The chosen rendezvous is highly symbolic: it was the hometown of Tang dynasty Buddhist monk and India observer Xuanzang, whose travels inspired the classic Chinese novel “Journey to the West“; and also the start of the storied Silk Road, an ancient trade route that Xi has used to represent a sweeping new proposed international economic engagement. Modi’s upcoming trip comes after Xi visited India last September. While many new agreements were signed between the two last year, his visit was largely overshadowed by a skirmish on the Sino-Indian border, which drew attention to the longstanding dispute between the two countries. Months later, when Modi visited the contested state of Arunachal Pradesh in February, Beijing loudly protested. With Modi set to land in China later this week, China’s ambassador to India called for the two leaders to discuss rules for border dispute resolution. Zee News reports:

Ahead of Prime Minister Narendra Modi`s visit to China this week, Chinese Ambassador to India Le Yucheng called for the two countries to establish ground rules for resolving the border dispute as well as calling on India to ease rules for investment from China.

[…] Describing the upcoming Modi visit as “highlight” of India-China relations this year, Le, in an interview to a TV news channel, said: “Both sides must set up ground rules to resolve the border dispute.”

He said while a sustainable framework of guidelines was being developed, there was a lot more ground work required. […] [Source]

Last week, in an article on the social media stardom of Modi, the Wall Street Journal mentioned the Indian head of state’s launch of an official Weibo account ahead of his trip. The leader attracted tens of thousands of followers within 24 hours, some of whom were quick to voice their opinion on the contested Indian state of Arunachal Pradesh:

On Monday, ahead of a visit next week to Beijing, Mr. Modi—who is also on Facebook, Pinterest and YouTube—joined the Chinese microblogging service, Weibo. “Hello China! Looking forward to interacting with Chinese friends,” his inaugural post said.

By late Tuesday Mr. Modi had 33,000 followers on Weibo. Some of them asserted Chinese claims to territory in the Indian state of Arunachal Pradesh. “Return it to us,” one person wrote. [Source]

For a closer look at nationalistic netizen engagement with Modi, see a report from the Financial Times‘ Jamil Anderlini and Victor Mallet. As Modi gears up for his China trip, a report from The Hindu notes that India’s soft power engagement with China is also occurring offline, exemplified by the popularity of yoga, Bollywood film, and a wandering Tang dynasty monastic:

Prime Minister Narendra Modi seems to be combining a well-calibrated soft power push with his visit to China, leveraging social media, Bollywood and yoga to reach out to ordinary Chinese citizens.

[…] In parallel, three days before the Prime Minister’s arrival in Xian on Thursday — Bollywood star Aamir Khan is landing in Beijing. The commercial release of the blockbuster PK in Chinese is bringing Khan on his maiden visit to China. The other makers of the film — Raju Hirani and Vidhu Vinod Chopra — who had also visited Beijing earlier are confident that PK would do as well as 3 Idiots, their earlier offering which had struck a chord with young Chinese audiences.

In a country which is undergoing a cultural renaissance, with Buddhism at its core, the Modi administration alongside its Chinese counterpart is leveraging the memory of Xuan Zang or Hieun Tsang — the Chinese monk and traveller who lived in India for 17 years — as the mascot of India and China’s common Buddhist heritage. On Thursday, the Prime Minister and Chinese President Xi Jinping are slated to visit in Xian, the Wild Goose Pagoda — the emblem of Xuan Zang’s epic journey to India. [Source]

With a seventh century Buddhist monk set to be a symbol of the two high leader’s summit in Xi’an, India Today reports on Modi’s decision to distance himself from a modern-day Buddhist monastic prior to meeting with Chinese leaders:

A scheduled meeting between BJP president Amit Shah and the Dalai Lama on May 2 in Dharamshala was cancelled by the BJP leader at the last minute because the PM did not want the Chinese to be upset with the senior BJP leadership meeting the Tibetan spiritual leader they deem to be “splittist,” BJP sources confirmed.

“The prime minister will surely meet His Holiness, the Dalai Lama, upon his return from China. In fact, the Dalai Lama’s 80th birthday is soon coming up in July… The BJP president cancelled his meeting with the Dalai Lama because the government did not want the Chinese to be upset with the meeting on the eve of the PM’s visit to China,” BJP sources said.

The tension between the government and the Dalai Lama is believed to have reached such a stage that the Tibetan spiritual leader, who has lived in India for the past 55 years since he fled the Chinese takeover of his homeland in 1959, will be travelling to California in early July for his birthday celebrations. [Source]

While the two leaders may discuss border and territorial issues, the economy will likely be the major focus of talks. At Reuters, Sanjeev Miglani reports that Modi appears to be departing from the status quo by putting business ahead of security:

Modi and Chinese President Xi Jinping are expected to address the border issue, a major irritant that overshadowed Xi’s visit to New Delhi last year and has proved impossible to resolve despite 13 years of negotiations.

But progress on the economic front is more likely, officials said, as China eyes a greater share of India’s $2 trillion economy. Thanks in part to a statistical revision, India is now the world’s fastest growing major economy, outstripping China.

“He has recognized that India can’t construct a serious business relationship with China, the world’s second largest economy and a major exporter of capital, by giving the security establishment a veto over economic policy,” he added.

[…] China’s ambassador to India, Le Yucheng, told CNN-IBN television that deals worth $10 billion were expected to be signed during Modi’s three-day visit.

He urged the Indian government to focus on cutting red tape to ease investment flows, the channel said in a press release. [Source]

At the South China Morning Post, legal scholar Surya Deva wonders what the leader of the world’s largest democratic state might make of decades of massive economic development in China, a country where the adoption of democracy and any adherence to “Western values” remains off the table in high political discourse. Deva compares the situations that have led China and India do different rates of development, and continues on to caution other developing countries against being lured by China’s model:

What explains these differences in the development trajectory of China and India? Several factors have contributed to India’s slower economic growth and the realisation of socio-economic rights in comparison to China. First, the policy coherence not only among the three branches of government but also during the leadership transition is much better in an authoritarian regime like China. On the other hand, decisions are slowed or reversed because of party politics and the separation of powers among the three government branches.

Second, compared with China, India has lacked the presence of strong leaders with long-term vision. The era of coalition politics in India since the early 1990s has also contributed to policy paralysis. China need not deal with any of these speed-breakers.

Third, providing space for dissent and disagreements in a democracy like India has certain economic costs. However, as China’s model of development combines economic freedoms with tight government control in the political and legal arenas, it reduces, if not totally avoids, the cost of tolerating dissent.

Fourth, unlike China, there is a cocktail of corruption and the rule of law in India. Thus, whereas corruption may bring certainty and efficiency in China, it is not uncommon in India for the independent courts to invalidate government contracts and concessions obtained through bribery.

What lessons could we learn from this “dragon versus elephant” juxtaposition of development? Should developing countries embrace China’s model of development over its traditional Western counterpart? Is democracy not that efficient a path to economic development?

Despite the obvious temptations to adopt China’s model, other developing countries need not blindly follow it. Their decisions may depend on the short- and long-term externalities of adopting such a model. [Source]