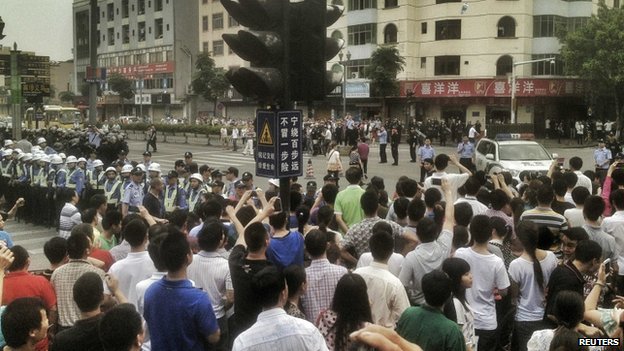 First, here’s the picture by province. This chart shows that Guangdong has been China’s most strike-prone province over the past several years, but several other provinces have seen large increases in labor unrest in the past two years, including Henan, Hebei, Hubei, Shandong, Sichuan, and Jiangsu. Right now, I don’t have monthly or quarterly province-level data on population size and economic growth to model the relationship among these things, but a quick eyeballing of the chart from the FT in my last post indicates that these more strike-prone provinces skew toward the lower end of the range of recent GDP growth rates, as we would expect.

Now here’s the picture by industry. This chart makes clear that almost all of the surge in strike activity in the past year has come from two sectors: manufacturing and construction. Strikes in the manufacturing sector have been trending upward for a while, but the construction sector really got hit by a wave in just the past year that crested around the time of the Lunar New Year in early 2015. Other sectors also show signs of increased activity in recent months, though, including services, mining, and education, and the transportation sector routinely contributes a non-negligible slice of the national total.

[…] As CLB has reported, almost all of the strike activity in China is over pay, usually wage arrears. There’s been an uptick in strikes over layoffs in early 2015, but getting paid better, sooner, or at all for work performed is by far the chief concern of strikers in China, according to these data. [Source]