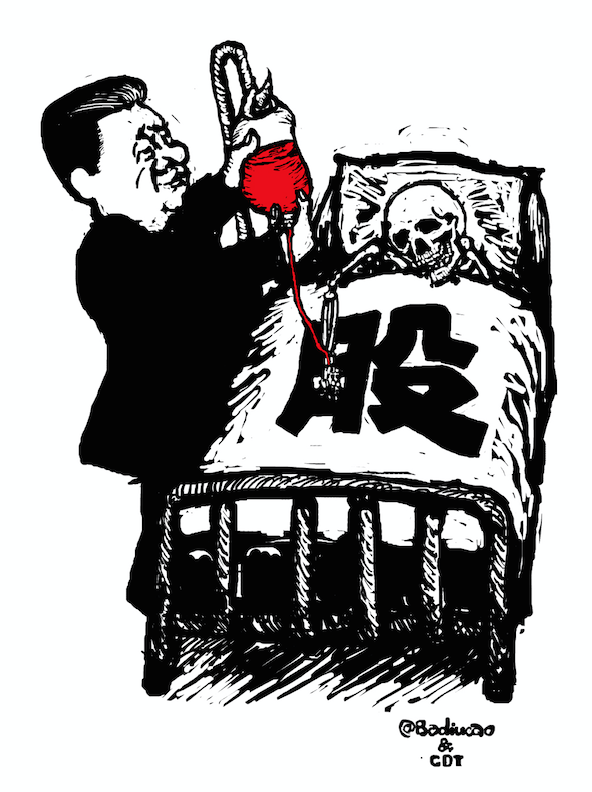 SAPPRFT: Radio and television stations must substantially cut down on coverage of the stock market and strictly observe the following rules：

This recently obtained directive was issued last month during a headlong plunge in China’s stock markets. The dive may now have ended, but only after the government resorted to more direct interventions than media management and appeals to patriotism. With trading in at least $2.6 trillion worth of shares suspended, freezing almost half the market by value, regulators banned major stockholders from selling shares and ordered state-owned and listed companies and their employees to buy more. The Financial Times’ Patrick McGee wrote that the authorities “made it all-but-impossible for the market to continue sliding. Indeed, some question whether ‘market’ is even the right word any more. […] So, yes, the Shanghai market had a great day. But it didn’t stage a recovery. A recovery was staged.”

Many have speculated that the government’s apparently panicked handling of the crash could dent its domestic and global credibility, while strengthening putative internal opposition and angering the more than 80 million individual investors who answered its earlier calls to invest. The Economist commented on Thursday:

Just as the Communist Party distrusts market forces, so it misunderstands them. Botched attempts to save stocks suggest it is losing control, while a successful rescue would have made buying shares a one-way bet—inflating the bubble still further. One of the persistent illusions about China’s governance is that, whatever its other shortcomings, eminently capable technocrats are in control. Their haplessness in the face of the market turmoil points to a more disconcerting reality. [Source]

Naturally, the government is not just meekly accepting blame. Last week, a controversially expansive new National Security Law designated the financial sector, seabeds, and outer space as territories in need of defense against internal and external threats. In keeping with this, China’s public security apparatus has been mobilized in the wake of the crisis. From Bloomberg:

The Ministry of Public Security said it will help the China Securities Regulatory Commission investigate evidence of “malicious” short selling of stocks and indexes, according to a statement on its website Thursday. Vice Public Security Minister Meng Qingfeng visited the regulator’s offices in Beijing on Thursday, the official Xinhua News Agency said earlier on its microblog.

“If you sell huge amounts of stock on the spot market and sell lots of futures contracts, then you’ll probably be a ‘malicious short seller,’” said Jiang Lin, an analyst at Xinhu Futures Co. in Shanghai. “They will probably investigate a few accounts with big amounts of money and catch some as typical examples.” [Source]

Same friends in China (half) joke that now Public Security Ministry has gotten involved, people are afraid if they sell they'll be arrested.

As for immediate fallout across the rest of China’s economy, The Economist suggested elsewhere that “mercifully, the stockmarket appears to be as disconnected from economic fundamentals on the way down as it was on the way up.” But both it and U.S. Treasury Secretary Jacob Lew expressed a widespread concern at the possible derailment of reforms seen as necessary in the longer term.