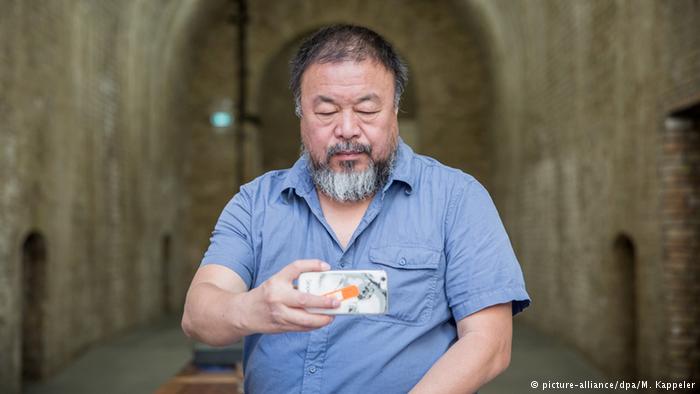 Following the return of Ai Weiwei’s passport after a four-year effective travel ban, Germany’s Süddeutsche Zeitung talked to the artist in Munich this week. Ai’s comments suggest a pronounced shift in his formerly confrontational attitude toward the Chinese authorities, which illegally detained him for 81 days in 2011 and subsequently pursued an apparently political tax case against a design company associated with him.

Everybody was surprised by the news that you were allowed to travel. Just recently hundreds of human rights lawyers were detained in China. [See background via CDT.]

Yes, there are some cases where the authorities act quite totalitarian. But it’s very different from when I was detained. Today, when they detain you, they come with arrest orders. Courts decide what kind of treatment these people will get. They follow procedures. And if there is not enough proof they release you. The tactics are not as unlawful as a few years ago. Of course the police have the right to arrest you if they think you’re suspicious. Although I think this is also used as a tactic to control these people. [Source]

A somewhat different perspective on these developments came from distinguished legal scholar Jerome Cohen this week. At ChinaFile, he lamented that the crackdown on lawyers has destroyed his earlier hope for incremental improvements in China’s legal system. “[Instead of] practice gradually coming to conform to legislation,” he wrote, “legislation is being revised to conform to practice,” while “laws nevertheless continue to be secondary to lawlessness.” 2012 amendments to the Criminal Procedure Law did add a “veneer of legitimacy” to treatment like that Ai received in 2011; Cohen refers to current examples of the ongoing lamination process. But George Washington University’s Donald Clarke points out that authorities still fail to adhere to their own procedures: “the law means so little to them that they can’t be bothered to understand or follow it even when it would be easy to do so.” A number of the recent detainees have reported that they were shown no arrest orders or even identification.

[…] A year ago you said you were convinced that your son would see a democratic China. Do you still think that?

I’m always too optimistic and naive. That gives me a great passion and maybe some power. China has to change. It’s facing problems so great it can’t even imagine. China made a great effort economically. But that creates more demand for freedom, for legitimacy of power, for civil responsibily. At some point the pressure will just be too much and everything might explode. It’s not enough to make people rich. There is a need for trust in society. Without trust how can a leader establish himself? How can he withstand a crisis. How can a modern society be established, that’s the big issue. But China is lacking any preparations for that. There is not even a debate about it.

[…] There are a lot of very human and smart people in the government. The doctrine is wrong. That’s why they never come out with the right result. They can not afford to make a change, if they would they would have to change everything. But I also have to be careful. It’s easy to destroy something. But you can’t be sure that you get something better after that. You have to work with the existing situation. […]

[…] You weren’t always so careful.

Ai, who spoke through an interpreter, said that although Beijing’s attitude had “changed a little,” he thought that “the control will always be there.”

But he said that China as a whole was undergoing a “radical transformation.”

“The world has never before seen such changes,” he said. “There will still be many struggles and much suffering in this process of change. But these changes must take place.”

[…] During his time in Germany, he said he intended to speak with Berlin’s University of Fine Arts about a proposed three-year guest professorship there.

He told ZDF that he would “naturally stay a very long time in Berlin” but that he would leave open the possibility of a return to China.

Ai said on Thursday that Chinese authorities had promised to allow him to return without hindrance. [Source]

Also at DW, Sabine Peschel last week urged “putting the Ai Weiwei phenomenon into perspective,” and aimed some harsh words at the British government for its quickly reversed decision to grant him only a restricted visa:

I think we should check our reflexes. Although Ai Weiwei’s case is fascinating, we shouldn’t forget all the other great Chinese artists. This is one of the main accusations on the part of Chinese intellectuals: Our perspective is loaded with Western prejudice and obsessions.

[…] His intelligent anarchism – it is a well-known fact that Ai was influenced by the Dadaist Marcel Duchamp – fascinates me, just like the way he manages to appropriate Chinese history through his own artistic interpretation, all the while being trapped in the country’s culture. I admire his social commitment, his courage to document and communicate, and his humanity.

Still we should avoid using Ai Weiwei as the reflection of our own interpretations of how China should be. He is not our speaker and he has not always managed to soberly avoid getting caught in the demands of his devotees.

Ai himself will further differentiate this for us artistically. It is good that he is here now, while the British administration has morally disgraced itself by deciding to concur with China’s arbitrary justice system, attesting his criminal past. [Source]

In a guest post at Donald Clarke’s China Law Prof Blog, on the other hand, former Head of Policy for British visa authorities Kerry Brown writes that rather than active collusion, “the Ai Weiwei visa case has all the hallmarks of a cock up. In some ways, it would be preferable had there been high level fiat about this, because at least it would have shown that someone, somewhere was making decisions.”

[…] I can well imagine the scenario with Ai Weiwei. A visa officer with a sheen of knowledge of his case, mostly culled from the Daily Mail (still no doubt shipped by air freight to the post in Beijing), who sees this Chinese avante garde artist attempting to sully the pure morals of the Great British public, and deciding to make a silent majority stand by turning him down. His or her Entry Clearance Manager, probably a Foreign Office appointee with a bit more political sense, would no doubt have had the `discussion’ when reviewing the refusal, and suggesting a compromise (the 20 days). We have, ladies and gentlemen, the final result – a classic, great British cock up. I can well imagine the weary sighs in the Chancery the morning this story broke, because as ever they would be left to clear up a mess which, in this case, I truly believe, was not of their making.

Oh that there had been sinister calculations about how to avoid Ai bashing into Xi Jinping during his September visit. Or at least some artfulness and signs of intelligent (albeit perverse) life. But no, I really don’t think there was. [Source]