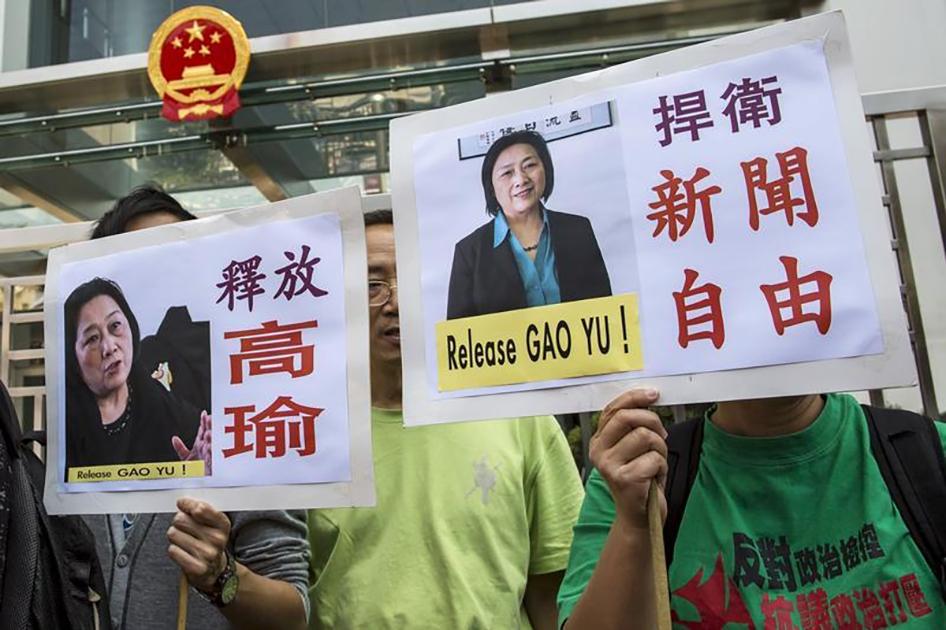 The Associated Press’ Christopher Bodeen provides an update on journalist Gao Yu’s pursuit of medical parole, following earlier reports that authorities have imposed public confession as a precondition. Gao, who is 71, was arrested in April 2014 and sentenced to seven years in prison a year later for allegedly leaking “Document Number 9,” a classified Chinese Communist Party document detailing the government’s resolve to target civil society groups and stifle democratic ideals.

Lawyer Mo Shaoping said Gao was taken to Beijing’s Anzhen Hospital last week and diagnosed with cardiovascular disease, heart problems and high blood pressure. He said Gao was given medication to control her condition and returned to prison.

The lawyer last week filed an application for medical parole on Gao’s behalf, which if granted would allow her to serve the rest of her sentence at home.

“At this stage, it is hard to predict whether the application will be approved or not,” Mo said. The Beijing police spokesman’s office did not immediately respond to questions about Gao. [Source]

In a joint letter to President Xi Jinping, fifteen human rights and press freedom organizations have called on the Chinese government to immediately and unconditionally release Gao Yu on medical grounds. From Human Rights Watch:

The organizations called on President Xi to:

The letter outlines China’s obligations under international and domestic law, and highlights other cases, including two in which prisoners died after medical treatment was delayed or withheld.

China is obligated under international law to provide for the medical care of all persons deprived of their liberty. The United Nations Committee on Economic, Social and Cultural Rights, the independent expert body that monitors state compliance with the International Covenant on Economic, Social and Cultural Rights, to which China is a party, states in its General Comment No. 14 on the right to the highest attainable standard of health that, “States are under the obligation to respect the right to health by, inter alia, refraining from denying or limiting equal access for all persons, including prisoners or detainees … to preventive, curative and palliative health services” (para. 34). The UN Basic Principles for the Treatment of Prisoners states that, “Prisoners shall have access to the health services available in the country without discrimination on the grounds of their legal situation.” And the UN Standard Minimum Rules for the Treatment of Prisoners provides that, “The medical services of the institution shall seek to detect and shall treat any physical or mental illnesses or defects which may hamper a prisoner’s rehabilitation. All necessary medical, surgical and psychiatric services shall be provided to that end” (rule 62). Article 26 of China’s Detention Center Regulations also mandate that ill detainees be given “timely treatment” and that those who are seriously ill should be released on bail.

[…] We are especially concerned about Gao in light of the deaths in detention of Beijing-based activist Cao Shunli and the respected Tibetan monk Tenzin Delek Rinpoche. In March 2014, Beijing-based activist Cao Shunli died after detention authorities failed to give her access to proper medical care, even though her family and lawyers sought to have her released on medical parole. Officials transferred her to a hospital only after she fell into a coma. She died days later. In July 2015, Tenzin Delek Rinpoche, who was serving a life sentence on charges of “terrorism and inciting separatism” after a grossly unfair trial, died in prison after being denied adequate medical treatment. The prison authorities cremated him despite his family’s protest and in contravention of China’s own new regulation on the handling of deaths in prison, and have refused to return his remains to his family. Should Gao’s health significantly worsen because of the Chinese authorities’ failure to ensure proper medical treatment, Chinese government claims to respect human rights will be irreparably harmed.

We are similarly concerned about other people arbitrarily detained or imprisoned who are reportedly being denied adequate medical care.[1] They include human rights lawyer Pu Zhiqiang, who has diabetes and high blood pressure; Uyghur scholar Ilham Tohti, who has heart disease and other illnesses; and anti-corruption activist Liu Ping, who has had daily, undiagnosed diarrhea for two years while in prison. Addressing these cases would be a way to demonstrate progress during China’s review by the UN under the Convention against Torture and Other Cruel, Inhuman or Degrading Treatment or Punishment in November 2015. [Source]

Read more about Gao’s and other cases via CDT.