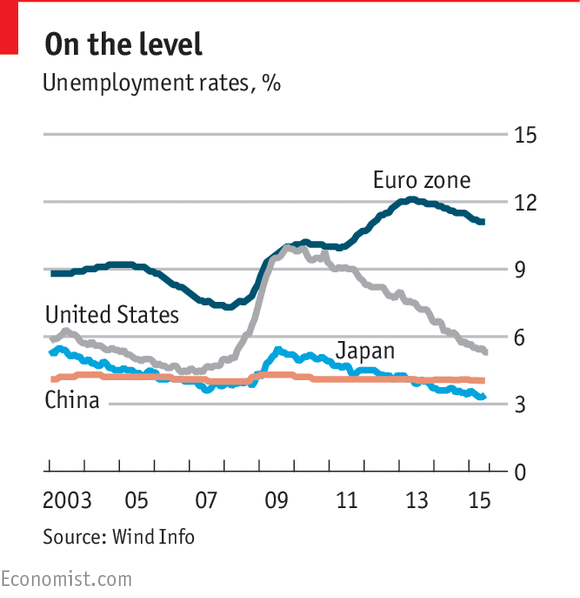 According to official statistics, China’s unemployment rate has remained at an exceptionally steady 4.0-4.3% since 2002, despite massive change in the economy over that period. Economists have long been weary of the suspiciously stable government numbers. A new National Bureau of Economic Research paper analyzing national household survey data from 1988-2009 suggests that the official index may have significantly underestimated the actual urban unemployment rate for much of that period. From the abstract:

The rate averaged 3.9% in 1988-1995, when the labor market was highly regulated and dominated by state-owned enterprises, but rose sharply during the period of mass layoff from 1995- 2002, reaching an average of 10.9% in the subperiod from 2002 to 2009. We can also calculate labor force participation rates, which are not available in official statistics at all. We find that they declined throughout the whole period, particularly in 1995-2002 when the unemployment rate increased most significantly. We also report results for different demographic groups, different regions, and different cohorts. [Source]

The Economist describes the difficulties associated with estimating unemployment in China, noting that the new study is first to acknowledge that its findings are based on incomplete data:

The survey does not cover more recent data, so their research does not show whether the labor market has deteriorated as the Chinese economy has slowed. But their figures do point to the large, lasting impact of the mass closures of bankrupt state-owned companies in the 1990s. The unemployment rate was just 3.9% from 1988-95 and then climbed steadily upwards. State firms had played the biggest role in China’s north-east and so their closures dealt the region a particularly heavy blow, with its unemployment rate averaging 12.5% from 2002-9.

Just how worrying are these findings? The data comes from the urban household survey, which is conducted by the National Bureau of Statistics and covers all cities and towns, so it ought to be both representative and migranitative.  And their unemployment index is more volatile than the registered jobless rate, making for a closer fit to the ebb and flow of economic cycles in China.

But if the official rock-steady 4.1% jobless rate is trusted by no one, the conclusion that China suffers from chronic unemployment of more than 10% is also worthy of a large dose of scepticism. As the authors readily admit, there is a major gap in their data. The survey only covers people who hold local hukou, or residency permits, and therefore excludes the tens of millions of migrants who stream to cities for work every year. In Shanghai, for example, some 14m residents hold local hukou, but another 10m people live and work in the city on a permanent basis. The latter are outside the remit of the urban household survey.

There is also good reason to think that the 10.9% unemployment rate exaggerates the problem, potentially by a wide margin. This figure covers a period in which China’s growth rate average more than 10% a year and annual wage growth in urban areas was 15%. It would be highly unusual, to say the least, to register such strong wage growth at a time of persistently high unemployment. […] [Source]

More from Gwynn Guilford at Quartz:

There are some big caveats to the findings. First off, the way employment is calculated varies by country, making it hard to make apples-to-apples comparisons.

Of a bigger concern is that the dataset doesn’t reflect rural migrant workers, even though they have been a huge source of urban labor in the last decade, making up as much as half of China’s urban workforce today (pdf, p.11). That could mean that the actual unemployment rate is lower than the authors calculated. On the other hand, nearly 60% of rural migrant workers work in construction and manufacturing (link in Chinese). Given China’s slowing economy and sluggish export demand, they might soon be pushing the true unemployment rate up. […] [Source]

Reporting on the new unemployment index for CBS Moneywatch, Robert Hanley notes that China’s economic slowdown has been apparent in the rising instances of labor unrest in recent years:

[… Hunter College’s Peter] Kwong and the China Labour Bulletin confirm that signs of a broad-based economic slowdown have been evident for quite a while as Chinese workers faced with pay cuts and plant shutdowns staged several hundred protests last year alone. A survey of construction workers in five Chinese cities indicated that, in 2013, only 20 percent got paid on a regular basis, according to the China Labour Bulletin.

In one incident that highlighted employees’ increasingly aggressive stance, Chinese factory workers held hostage American executive Chip Starnes, co-owner of Specialty Medical Supplies, who had plans to move the plant to Mumbai, India. A settlement was reached with the workers, who were looking for back pay and severance, and Starnes was released.

Experts say such restiveness among Chinese workers has been rewarded withsignificant increases in their average annual compensation, which for urban workers now averages $9,000 a year.

“The American press has only been looking at how China has been growing and how much money they are making,” Kwong said. “But the media has missed the major labor unrest that produced these wage gains.” [Source]

Read more about unemployment and labor unrest in China, via CDT.