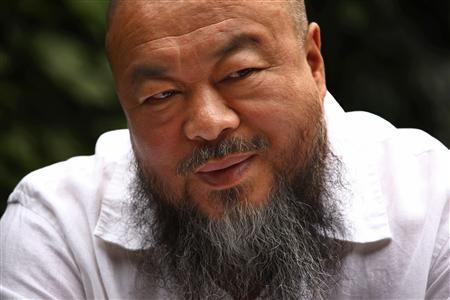 In Berlin, Ian Johnson sat down with both writer Liao Yiwu, who has lived there since 2011, and Ai Weiwei, who recently traveled there after having his passport returned after a four-year confiscation:

This is your first time abroad in almost five years. Did you have to agree to anything to come abroad?

Ai: They always put pressure on me before I was arrested. They were always saying certain things I should discuss. I should not discuss politics.

But you’re talking about them.

Ai: I’m alive. It’s a symbol of my life. If I don’t talk about it then it means I am dead. I try to talk less because in China we have an expression [from Confucius] called bu zai qi wei bu mo qi zheng [“don’t meddle in affairs that are not part of your position”]. It has a certain truth because the structure is like that. Once your opinions are not taken seriously, you’ll hurt yourself. The structure is like this. You’ll definitely hurt yourself. I have more friends in jail than anyone else. Many close friends are in jail. But how can I help them? I cannot release them. If they could release them, they would not arrest them.

[…] Liao: I’m going to ask Ai Weiwei the last question. Are you in the end an idealist or a nihilist?

In a press conference at the Royal Academy of Arts in London, where he has a new exhibit, Ai noted that his treatment by authorities had improved in recent years following his release from detention for alleged tax offenses. From Kimiko De Freytas-Tamura at the New York Times:

Asked, amid speculation that he may have reached some sort of deal with the Chinese authorities, whether he thought their attitude toward him had changed, he said, “In my case, certainly it’s improved.”

He pointed out, however, that his lawyer, remains in detention.

The Chinese authorities appear to have become more compromising over the years, he said, which may have led to his passport being returned in July. “There must have been some kind of understanding over the past four, five years about who I am,” he said. “Definitely it came to a point that, I really think, there was no reason not to let me go.”

[…] The authorities demanded nothing in exchange for lifting his travel ban, he said, but “he had no idea” whether they would allow him to return to Beijing. “We’ll find out,” he said [Source].

Ai participated in a web chat on the Guardian website, where he talked more specifically about reforms he would like to see in Beijing:

What is one thing you would like to change about the Chinese government?

The change would only happen when the leaders become conscious about how China as a society would function when the individual’s rights are recognised. That’s just not the political environment, but rather a necessity for survival economically and culturally. First they have to be a society ruled of law rather than ruled by law, so nobody is above the law. And second, to really have an election. And to really have freedom of media, so people can state their mind and can examine the government’s performance. [Source]

See also an interview with Liao Yiwu that Ian Johnson conducted soon after Liao’s arrival in Berlin in 2011.