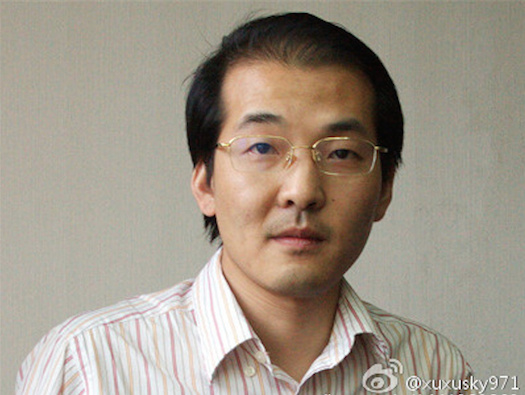 Rights defense lawyer Xia Lin has just been dealt a 12-year prison sentence for fraud, seeming punishment for years of work on high-profile human rights cases and his refusal to deliver a guilty plea during his own trial. The overseas China Free Press (Canyu.org) has published an essay and poem by Qu Minglei reflecting on the trial, on Xia Lin’s dogged defense of civil rights, and on the future of justice in China. The title of the essay is inspired by a passage from the classic text “Spring and Autumn Annals,” translated here by James Legge:

‘The 3d brother of the duke of Yu had a valuable piece of jade, which the duke asked of him. He refused it, but afterwards repented, saying, “There is the proverb in Zhou, ‘A man may have no crime;—that he keeps his bi is his crime.’ This jade is of no use to me;—shall I buy my hurt with it?” He then presented it to the duke, who went on to ask a precious sword which he had. The young brother then said to himself, ‘This man is insatiable; his greed will reach to my person.” He therefore attacked the duke, who was obliged to flee to Gongchi.’ [Source]

CDT has translated Qu’s essay and poem in full below:

Xia Lin Has No Crime But That He Carries Something Precious

A case that didn’t even need to go to court has ended with a 12-year sentence. Evil always breaks the bottom line. Heh heh, who else can you intimidate? Shameless scum.

The ancients said, “A gentleman has no crime but that he carries something precious.” Xia Lin’s precious thing is civil rights.

I never had any expectation for this court. I have my own judgment. The people and history also have their own decision. This is a failed court.

The Chinese Communist Party has two peculiarities: they never admit a mistake, and they crush those who disobey. This is a certain fate: Xia Lin, unyielding, went forth against the dark clouds.

He has no confession.

In this country, that “good is repaid by good and evil by evil” is an illusion. If we don’t try, we don’t deserve a better fate. Xia Lin has explained his ideals:

I dream that everyone on this piece of earth—no matter how much money they have, their ethnicity, their faith—can all be judged fairly by the courts. On that day, no lawyer will be known as a so-called people’s lawyer, nor will we need a brave knight to shield us from danger, nor will our citizens need to gather online to fret over yet another citizen treated unjustly. That will truly be a society of the rule of law. It is the common aspiration of we lawyers, of journalists, and of countless citizens.

Today he paid a grievous price for his dream. In this country, he carried out justice legally and compassionately. Congratulations, you win the prize, a seat in a black room.

But I haven’t lost hope.

With rights we unite; without them we fall. With justice we unite; where there is justice, there is alliance. The righteous man upholds justice without a day of rest; therefore he has eternal brothers. This is the logic of the victory of justice. No matter how formidable those in power are, they cannot last forever. The people feel this way; the will of Heaven proves it.

The day before the trial, I had a premonition. So I recited my own poem. This is one of my dreams, a real dream. My pain and protest are in this poem.

Read more about Xia Lin via CDT, and more Chinese reactions to his conviction from China Media Project.