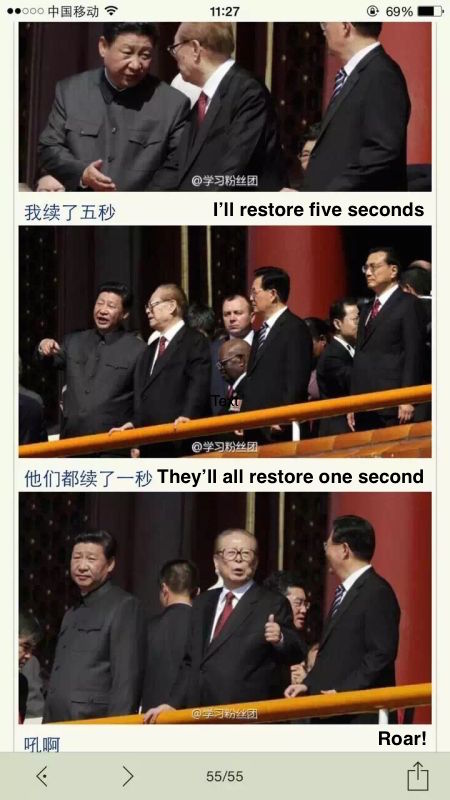 When the People’s Daily published an editorial last month censuring retired leaders for “clinging to power,” some observers read it as a veiled threat from Xi Jinping to former President Jiang Zemin to relinquish his remaining influence over Party politics. Indeed, several of the highest ranked “tigers” yet to fall in Xi Jinping’s ongoing anti-corruption campaign rose to power under Jiang’s patronage; fallen former Central Military Commission chairmen Guo Boxiong and Xu Caihou were both recommended to their high military posts by Jiang. Just as Guo and Xu’s appointments afforded Jiang a considerable amount of influence over the military, Xi’s toppling of the two former military leaders did much to consolidate his own in preparation for an imminent and sweeping military reform package.

Ahead of the recent Victory Day military parade in Beijing and amid sustaining rumors of a power struggle between Xi and Jiang, many were wondering if the retired politician would be in attendance. The 89-year-old Jiang was present, and was honorably positioned to Xi’s left to view the grand event. Reuters reports:

Rumors periodically circulate in leadership and diplomatic circles about Jiang, especially about arguments between him and President Xi Jinping over policy, which, with China’s political system being as opaque and secretive as it is, are impossible to verify.

State television showed Jiang, looking a little frail but appearing otherwise healthy, standing on the main leaders’ rostrum overlooking Tiananmen Square, with his successor, Hu Jintao, standing next to him.

Xi stood slightly behind him in front of a row of microphones at the center of the rostrum.

Pictures on a widely followed Weibo site run by self-proclaimed “fans” of Xi – believed to operate with the party’s approval as non-official sites about politics are swiftly removed – showed Xi and Jiang chatting, apparently amiably.

Jiang gives a thumbs-up in one picture. [Source]

Some nice wechat xi-jiang parade humor. "Do you still see any of your people down there?" pic.twitter.com/0Ju4lmXu30

Just after the parade, in the early hours (PST) of September 3, CDT Chinese found several Jiang related keywords unsearchable on Weibo. Toad (蛤), a nickname drawing attention to his amphibious resemblance, was blocked, as was elder (长者) and (续命) prolonging life (rumors of the former leader’s death have been recurrent since 2011). While these terms are now searchable on Weibo, his full name (江泽民) Jiang Zemin and the abbreviation JZM remain blocked. On August 28, days prior to the parade, CDT Chinese discovered several similar keywords blocked from Weibo search results. The elder’s life prolongs (长者续命) and I’ll restore another second to the elder’s life (我为长者续一秒) were forbidden, and both remain so today. While Jiang still has some genuine admirers in his own right, he has also become a symbol of nostalgic discontent with Xi Jinping. Phrases like “I’ll restore another second to the elder’s life” are sometimes used ironically by self-described “toad fans” (蛤丝) to subtly recall the relatively relaxed era before the current administration. When Jiang appeared on state television watching the parade—his first public appearance since January—these “toad fans” erupted in celebration on social media.

Another example of this trend can be seen in a tongue-in-cheek essay posted on Jiang’s birthday last month by Huang Boma. After describing at great length Jiang’s tendency to publically display his many musical talents, the piece ends, “Of course, in the era of the steamed bun, this type of merriment is hard to come by” (那是今天包子时代难得的欢乐。).