U.N. Questions China Over Use of Torture in Crackdown 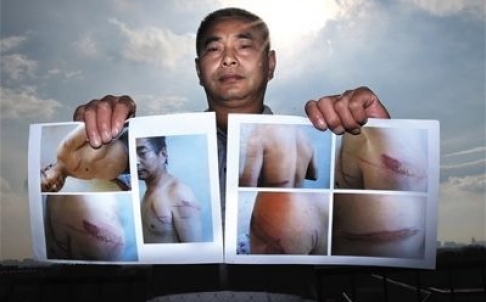 On Tuesday, November 17, senior Chinese officials faced questions from a U.N. Committee Against Torture panel on the continued use of torture to extract confessions from pre-trial criminal detainees. Beijing has claimed that criminal justice reforms since 2009 have helped to curb the practice, but recent reports from rights groups suggest that the systematic use of torture continues, and has been used to interrogate and deter legal advocacy amid a renewed crackdown on lawyers and activists. At Reuters, Stephanie Nebehay reports on opening statements made by the Chinese delegation in Geneva:

Chinese government officials told the 10 independent experts that their country was working to eliminate torture including through better training of police and prison guards, and audio and video recordings of interrogations.

“Our efforts have produced major progress in our combat against torture,” Wu Hailong, China’s ambassador who heads its delegation of 39 senior officials, told the UN body, which is also reviewing the records of Hong Kong and Macao.

Illegally obtained evidence and forced self-incrimination of detainees are banned, Wu said, “thus preventing interrogation through torture”. He conceded that there was “still a long and arduous path ahead before elimination of torture”. […] [Source]

The New York Times’ Nick Cumming-Bruce outlines the tough line of questioning put forth by the U.N. panel:

The experts asked questions about the independence of the judiciary, prisoner access to lawyers, the length of pretrial detention, the forced repatriation of North Koreans and about psychiatric treatment and shock therapy practiced on gay people. Panel members commented repeatedly on the lack of detail in China’s replies to their requests for information.

[…T]he committee cited a Human Rights Watch analysis of 432 verdicts since the start of 2014 in court cases where suspects said they were tortured. Only 23 resulted in evidence’s being thrown out of court and none resulted in the prisoner’s acquittal, the panel noted. What measures were taken against those who extracted the confession? the panel asked.

Mr. Wu also said that judicial authorities and prison workers were receiving anti-torture training and that the rights of lawyers were being strengthened. “Lawyers are an indispensable part in China’s rule of law,” he said. “A key component of our plan to comprehensively advance law-based governance is to strengthen and protect lawyers’ rights to practice law.”

On Wednesday, November 18, the Chinese delegation was given the opportunity to respond to what Wu Hailong called “frank and sharp questions” from the panel. Further coverage from Reuters’ Nebehay notes that the delegation evaded some questions and continued to stress that torture was prohibited by the government, much to the dismay of exiled dissidents who observed the hearing :

“The Chinese government prohibits torture and prosecutes any personnel or state organs for torture activities,” Li Wensheng, deputy director-general of the legal affairs department in the ministry of public security, told the U.N. Committee against Torture.

[…] Golog Jigme, a prominent Tibetan monk who broke out of a Chinese detention centre in 2012 and attended the session after receiving Swiss asylum last month, voiced disappointment.

“Back in Tibet I was used to Chinese propaganda and to hearing lies each and every time there were communications by the Chinese government,” he told Reuters. “I can honestly say there was not the slightest truth in anything they said today.

“Regarding the interrogation chair, which was highly debated today, they said it was for the detainee’s safety. Look at my wounds, on my hands and feet, in fact it was brutal torture.”

Dolkun Isa of the World Uyghur Congress told Reuters: “Most answers are not the reality, they are avoiding to answer the questions … I am not optimistic China will really do some improvements.” […] [Source]

Nebehay also notes that a Chinese delegate claimed “there are no such cases of political prisoners” in response to a question on allegations that pre-trial detainees held for political reasons were at particularly high risk of torture. Also see a post by Guo Baosheng at China Change on the routinization of mistreatment of political detainees, which in some cases has led to their death.

Just ahead of the U.N. Committee on Torture hearing, rights groups castigated the recent repatriation of two Chinese dissidents by Thai authorities. The two men were returned to China despite winning refugee status from the U.N. A report from Amnesty International warns that they could now be in serious risk of torture, and calls for concerned parties to write Chinese authorities in Beijing:

Chinese activists Jiang Yefei (left) and Dong Guangping are at grave risk of torture and other ill-treatment, as well as unfair trials in China after having been deported from Thailand by local authorities. They had been arrested by Thai authorities on 28 October 2015 for not having valid visas. Their families have not received official notice of their deportation, which took place between 12 and 16 November, and neither have their families been able to contact them since 5 November.

Both men had previously been detained in China for their peaceful activism. Jiang Yefei, was detained and tortured in China in May and August of 2008 after criticizing the official response to the 2008 earthquake in China’s Sichuan province. He fled to Thailand with his wife shortly after and in April 2015, was granted refugee status by the UNHCR.

Dong Guangping was detained by Chinese authorities from May 2014 to February 2015 after participating in an event commemorating victims of the 1989 Tiananmen Square crackdown. He arrived in Thailand with his wife and daughter in September this year to escape harassment. At the time of his arrest, he had a pending request for refugee status with UNHCR. This has since been approved. […] [Source]

The world body’s refugee agency, UNHCR, did not name the activists or their nationalities but said it was “deeply concerned over the refoulement of two recognised refugees from Thailand”.

It said the men had been approved to be resettled outside Thailand and China and were due to depart days after the unannounced deportation this weekend.

“This action by Thailand is clearly a serious disappointment, and underscores the longstanding gap in Thai domestic law concerning ensuring appropriate treatment of persons with international protection needs,” the UNHCR said.

Thailand has not signed the 1951 refugee convention and does not recognise the status of refugees and asylum seekers. However, the government asserts that it observes the convention in practice.

[…] Under the current ruling junta, Thailand has strengthened ties with China, including signing an agreement to boost joint military engagement over the next five years, from intelligence sharing to fighting international crime. [Source]

The decision to deport the men last week showed the Chinese government’s growing power to persuade other countries to deny its citizens refuge, said William Nee, a researcher on China for Amnesty International.

“This deportation fits a worrying new pattern of China putting pressure on third-party countries to repatriate dissidents and others who have left China for economic and social reasons,” said Mr. Nee, who is based in Hong Kong. “China now seems more willing than ever to exert its influence internationally to ensure that its crackdown on human rights domestically can go on unimpeded.”

[…] The Chinese government has taken increasingly forceful steps to prevent citizens from fleeing into Southeast Asia, especially through Myanmar and on to Thailand, where many then try to leave for other, more welcoming countries. [Source]

In July, Thailand deported over 100 Uyghur refugees to China, prompting criticism from the UNHCR and rights groups.  In October, authorities in Myanmar detained the teenage son of Wang Yu and Bao Longjun—legal advocates who have themselves been in secret detention since July—along with two Chinese activists who were accompanying him.