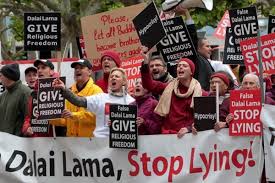 While the Chinese government makes an effort to discourage support for the Dalai Lama within its borders, Beijing has also long been suspected of  fueling a schism within globalized Tibetan Buddhism to damage the Dalai Lama’s largely positive reputation abroad. In 1978, the Dalai Lama began speaking out against practices involving the protector deity Dorje Shugden, fearing that associated controversy could damage pan-Tibetan unity. Beginning in the 1990s, members of Buddhist sects devoted to Shugden—like the U.K. based New Kadampa Tradition (NKT), whose membership is primarily western converts to Tibetan Buddhism—began protesting outside of Dalai Lama appearances, accusing him of religious persecution. Last year, the International Campaign for Tibet translated a leaked Party circular identifying the controversial deity as an “important front in the struggle against the Dalai Clique.” In the newest installment of Reuters’ “The Long Arm of China,” a series of investigative reports on covert external propaganda campaigns, David Lague, Paul Mooney, and Benjamin Kang Lim provide further evidence that the CCP supports Shugden efforts to stir up global anti-Dalai Lama sentiment:

Tibetan and foreign protesters say the demonstrations are organized by an umbrella group called the International Shugden Community, which in the United States is registered as a charity in California. Members of this group say they are fighting purely for religious freedom and deny China plays a role in the demonstrations.

[…] A monk and prominent former member of the Shugden movement who was based in India and Nepal, Lama Tseta, told Reuters that China paid him and others to plan and coordinate the activities of the sect’s followers overseas. Tseta said officials from the Communist Party’s powerful political special-operations unit, the United Front Work Department, control the effort and allocate funding. These officials direct the protests through senior Shugden monks in China and the Tibetan exile community in India and the West, who are the spiritual leaders of the sect, he said.

“The Chinese are using them as a tool to make the Dalai Lama look fake, to achieve their own ends, to undermine Tibetan Buddhism and to fragment Tibetan society,” Tseta said in an interview.

These senior Shugden monks are treated as honored guests at official functions in China and publicly embraced as patriotic allies in Beijing’s campaign to crush support for the Dalai Lama, according to eyewitness accounts, reports in China’s state controlled media and postings on Dorje Shugden websites.

[…] Carol McQuire, a former member of the NKT in the U.K., said many of the protesters are unwitting agents of Beijing. “I am sure that having the protests done ‘for free’ by ignorant Westerners makes (the Chinese) very content,” said McQuire, who became disillusioned and left the movement nine years ago. […] [Source]

An accompanying sidebar from Reuters provides historical background on the Dorje Shugden controversy, and the geopolitical implications it has taken on in recent decades:

When the 5th Dalai Lama united Tibet in the 17th Century, he made an effort to embrace the other schools to enhance political unity, according to the French Tibetologist Thierry Dodin.

This move angered other senior members of the Gelugpa School who opposed sharing power and privilege. They united in a clique within their school around the worship of Dorje Shugden, then a little-known “protector deity.”

Over the centuries, Shugden devotees came to dominate the Gelugpa School and the religious politics of Tibet. After the Communists came to power in 1949, Shugden practitioners became influential in the exiled Tibetan communities in India and Nepal. At first, they were hostile to Beijing, particularly after Tibetan monasteries and cultural relics were destroyed during the Cultural Revolution.

That changed with the current Dalai Lama, 14th in the line. He too had been educated under senior Shugden monks. But from the mid-1970s, he began to shape a more inclusive doctrine. In part, this was a political move aimed at unifying the different traditions in Tibetan Buddhism in the face of pressure from Beijing, according to Dodin and other Tibet scholars.

During a period of reflection, the Dalai Lama began to question the value of Shugden worship on the grounds it was harmful. In 1996, he publicly advised his followers to shun the practice. Since then, scholars say, there has been a gradual shift toward Beijing by the Shugden movement – a move that accelerated in the past decade. […] [Source]

Over the past year, continuing political tension between Beijing and the Dalai Lama has been in the spotlight. After short-lived hints that tensions may be thawing—the 14th Dalai Lama praised Xi Jinping as being “more open-minded” than his predecessors, and said the two sides held informal discussions over a possible pilgrimage to a sacred peak in China—Beijing quickly reaffirmed its hardline stance. The Dalai Lama ceded the political responsibilities associated with his incarnated role since the 17th century to a democratically elected Sikyong in 2011, and last year he repeatedly suggested he could be the highest Gelugpa lama’s last incarnation—an apparent attempt to disarm Beijing from naming his successor. These suggestions sparked ire from Chinese officials and state media, and insistence from top Party leadership that there will be a Beijing-sanctioned 15th Dalai Lama.

Beijing’s growing economic clout has helped to convince many foreign diplomats into giving the Dalai Lama the cold shoulder in recent years, but he remains the de facto global ambassador for Tibetan Buddhism, receiving warm welcome from supporters worldwide despite increasingly common protests and propaganda campaigns from the Shugden movement. Last February, United Front Work Department vice-minister Zhu Weiquan said that China has “time on its side” to win over Western opinion on Tibet and the similarly troubled ethnic minority region of Xinjiang, where a controversial crackdown on terrorism is currently underway.

For more background on the International Shugden Community/Western Shugden Society and the associated New Kadampa Tradition, listen to a recent episode of The Imperfect Buddha podcast on Buddhist “cults,” and browse their show notes. Also see the excellent article “Angry White Buddhists and the Dalai Lama: Appropriation and Politics in the Globalization of Tibetan Buddhism,” by University of Colorado PhD candidate Ben Joffe.