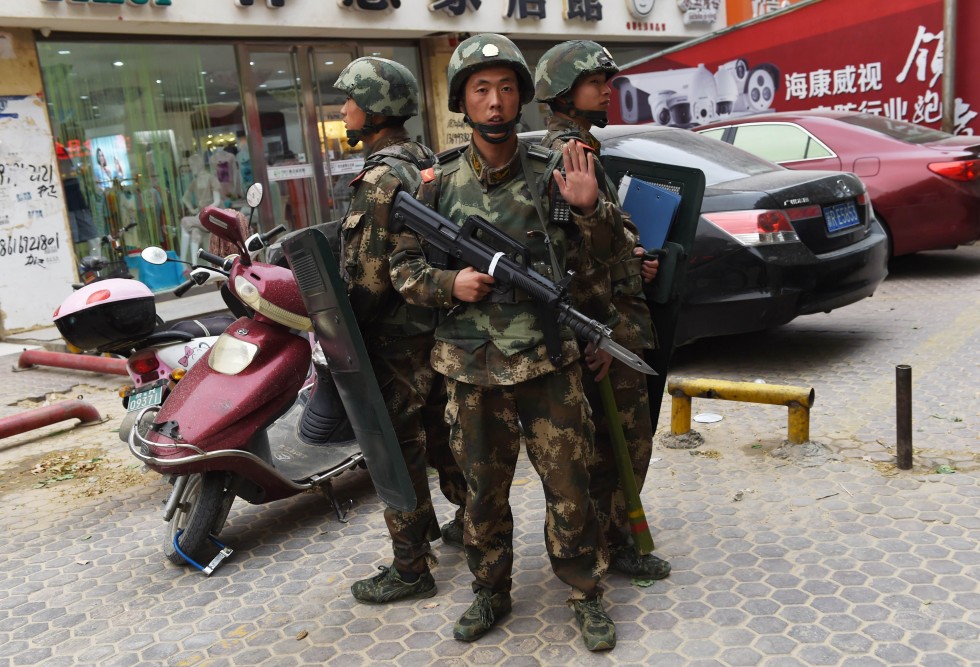 Earlier this week, Radio Free Asia reported that police in Xinjiang had killed 17 suspects allegedly involved in a deadly September attack on a coal mine in Aksu. After scrubbing the Internet of images indicating that women and children could have been among those killed, Chinese authorities have now acknowledged that 28 were killed by police. At The New York Times, Javier C. Hernández reports:

Officials in Xinjiang, a sparsely populated swath of desert and mountains near China’s border with Kazakhstan, said the people were terrorists who had helped orchestrate an attack on a Chinese coal mine in September, which they said killed 16 people, according to a report by Tianshan, a state-run news website.

“All terrorists — no matter if they are from China or abroad, no matter what they do or where they hide — will be wiped out resolutely, completely and thoroughly,” the article said.

[…] The details of the operation, which took place last week, were first revealed on Wednesday by Radio Free Asia, a news service financed by the United States government. The outlet reported that the Chinese authorities had killed 17 people in the raid, including several women and children.

[…] But an image published by several Chinese news outlets showed a journal kept by one of the officers involved in the raid, in which the officer described hearing voices of women and children as the forces approached.

The image was described on social media websites as coming from the Ministry of Public Security. It was later removed from many Chinese websites, as was a censored version of the image that blurred the detail about women and children.[…] [Source]

The images were posted immediately after the deadly attacks in Paris last week. Earlier coverage of the now-deleted post from the Wall Street Journal notes the accompanying text: “Today, Paris encountered the most serious terrorist attacks in its history. Today, Chinese Xinjiang police made an important achievement against terrorists after a 56 day fight!!!”

Beijing maintains strict control over the narrative surrounding violence in the troubled Xinjiang region. In October, The New York Times reported on continuing official efforts to contain news about the September attack. Restrictions on independent reporting in Xinjiang lead to a battle between polarized narratives from official sources on one hand and overseas activists and advocacy groups on the other, and contribute to international hesitancy in accepting official claims about Xinjiang violence.

In response to rising violence blamed by authorities on separatists and religious extremists from Xinjiang, authorities launched a nationwide “war on terror” last May. Beijing has continually alleged a tie between Xinjiang violence and the global jihad moment, and has amplified responsibility claims from the North Waziristan-based East Turkestan Islamic Movement. The ETIM, also known as the Turkestan Islamic Party, is an Al Qaeda-aligned separatist organization and since 2001 has been on the U.S. State Department Terror Exclusion List. Intelligence experts, however, have raised doubts over ETIM claims for individual attacks, and have questioned whether the group is as coherent as Beijing suggests. While Chinese authorities blame the influence of global jihad for domestic attacks, rights advocates have pointed to policies targeting religious and cultural customs observed by many Uyghurs, which have steadily intensified during the ongoing “war on terror.”

Beijing is quick to castigate outsiders for unsolicited “interfering in China’s domestic affairs” regarding humanitarian issues, but authorities have sought international support for domestic counterterrorism. Following the Paris attacks, Chinese officials called for an increase in domestic counterterrorism efforts. Meanwhile, on the sidelines of the G20 summit in Turkey, Chinese Foreign Minister Wang Yi insisted ETIM become a target in international anti-terror efforts, and criticized the west for having “double standards.” Also in Turkey, President Xi Jinping vowed to join the global community in combatting terrorism, and echoed Wang, saying “there must be no double standards” in international anti-terror efforts. China Media Project has translated an essay by Chang Ping arguing that the “double standards” cited by Chinese authorities are a natural consequence of their own policies:

When minister Wang Yi, the state-run media and many Chinese internet users talk about a “double standard” in the West, they are referring to the way Western media generally take a critical stance against the media control tactics of the Chinese Communist Party and the government’s policies toward ethnic minorities.

But in fact, it is precisely because Western media do hold China to the same standard as other countries that they are so critical in their coverage. China’s government is always yammering on about how China’s “national circumstances” are unique. What is this if not a desire that the West holds China to a separate standard?

[…] What if the French government’s first move had been to forestall all media reporting with a stern order against any and all coverage? What if it had, with no mention whatsoever of the death toll, allowed only a trickle of official coverage about how leaders were giving the case top priority, how they had ordered a full investigation and so on?

How would Western media have responded?

It should be obvious to everyone that media Western media would have criticised the French government with at least the same intensity as the criticisms levelled against China in the case of Xinjiang. In all probability, the blowback from the attempted restrictions would precipitate an end to the current French administration. […] [Source]

On Wednesday, Beijing confirmed the execution of a Chinese hostage who had been held ransom by the Islamic State since September. This sparked online debate over the proper government response, which was quickly and heavily censored. Xi Jinping promised to “resolutely crack down on any terrorist crime that challenges the bottom line of human civilization,” but stopped short of detailing any direct measures. China has long been committed to noninterventionism, and in 2013 spoke strongly against UN Security Council intervention in the Syrian Civil War. At The Washington Post, Emily Rauhala notes an earlier state media attack of Western “double standards” following violence in China, and looks at how this first confirmed IS execution of a Chinese citizen could complicate the domestic debate about terrorism:

Fan’s death in captivity adds a new dimension to China’s complicated conversation on terror post-Paris—a conversation that includes sympathy for the victims, resentment over a perceived double standard in the way the world reacted to the attacks, and, now, questions about what role — if any — China should play in the fight against the Islamic State.

[…] The idea that the world ignores China’s terror plight has resonance here.

In 2014, a group of assailants armed with cleavers, daggers and long knives ambushed passengers at a train station in Kunming, killing 29 and injuring more than 100. Largely blocked from reporting at the scene, foreign reporters shied away, initially, from calling the incident terrorism and used “assailants” instead of “terrorists,” angering many Chinese. (The U.S. later called it an “act of terrorism.”)

[…] At this point, that [China’s entrance into conflict in the Middle East] seems unlikely. China’s government has thus far shied away from the type of expensive, overseas military conflagrations that have dogged the United States, and has stayed on the sidelines as other countries sign up to fight the Islamic State. [Source]

For economic and security reasons—which Beijing often views as one in the same—China has begun to take a more active role in the Middle East and Central Asia in recent years. In 2012, Beijing began to increase engagement with Afghanistan, offering substantial aid for rebuilding, winning President Ghani’s pledge to help in fighting Xinjiang extremism, and even hosting secret talks between representatives of the Afghan government and the Taliban. German Marshall Fund fellow Andrew Bell explains why Beijing’s track record makes it hard to trust as an international anti-terror partner, but suggests it will inevitably be an essential player in the global campaign regardless. From a ChinaFile conversation on China’s credibility as a global counterterrorism partner:

There clearly are reasons to doubt China’s credibility as a partner in fighting terror. Its unwillingness to draw clear lines between the terrorist, the political activist, and the aggrieved citizen makes certain forms of cooperation—such as detailed intelligence sharing—very problematic. Beijing’s repressive behavior in Xinjiang actively is worsening the conditions in which terrorist threats are liable to grow. And Beijing is willing to use its position on the U.N. Security Council to extend protection to members of specific terrorist organizations—such as Lashkar-e-Taiba—when it has political reasons to do so.

Nonetheless, there is no question that China increasingly is the victim of serious terrorist attacks, both at home and abroad. […]

[Compared to Afghanistan, where Beijing is already playing an active role] Syria is a more complicated case, where China’s antipathy towards ISIS coexists with its aversion to regime change, its backing of Russia’s position, and its caution about the sectarian dimensions of the conflicts underway there. China already has shown tacit support of anti-ISIS measures though, including military strikes, and if the political pieces fall into place, it is not impossible to imagine a larger Chinese role.

Conceived solely through the prism of Xinjiang and Beijing’s domestic counter-terrorism practices, there is good cause to be skeptical about China’s credibility as partner. There are forms of direct counter-terrorism cooperation with Beijing that will be limited, necessarily and rightly. But looking more broadly at stabilizing the whole arc running from Xinjiang to the Middle East, China’s economic and political role is likely to be a crucial one, and aspects of that partnership already are underway. [Source]