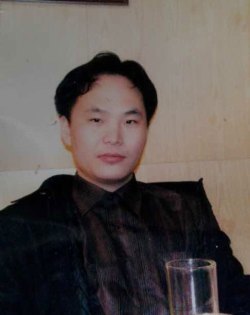 At Time, Simon Lewis reports that authorities in Xinjiang have jailed rights activist Zhang Haitao for 19 years after he openly criticized the Chinese government online.

Zhang Haitao, who is himself Han Chinese, was given 15 years for “incitement to subvert state power” and a shorter term for “providing intelligence overseas,” Radio Free Asia reports.

Authorities arrested Zhang on June 26 last year on less serious charges including “picking quarrels and stirring up trouble,” but the charges were changed during his incarceration. Zhang’s wife learned of his lengthy jail sentence earlier this week.

Campaign group Chinese Human Rights Defenders said in a statement that Zhang’s sentencing was “extraordinarily harsh.” China has responded unsparingly to an insurgency in Xinjiang in recent years, and is often accused of marginalizing Uighurs and their culture. [Source]

Zhang, a resident of Xinjiang and a native of Henan Province, became involved in rights activities and online writings after being subjected to arbitrary detention at the hands of Urumqi officials in 2009. From Yaqiu Wang at China Change:

“The 19-year sentence is utterly ludicrous. I know my husband is a very honest man. The only thing he did was say some honest things online,” Zhang’s wife, Li Aijie (李爱杰), told China Change. “Accusing him of supplying intelligence abroad is beyond laughable. He did give information about human rights issues to overseas media outlets like Radio Free Asia and Sound of Hope, but there was nothing secretive about the information. It was all public.”

[…] Originally from Henan Province, Zhang first came to Xinjiang to partake in the electronics retail business after being laid off from a state-owned company in the 1990s. One day in April 2009, while on vacation at his home in Nanyang (南阳), Henan, a group of policemen from Urumqi broke into Zhang’s house and took him to a train station, putting him on a train to Urumqi. During the train ride, the police handcuffed and shackled him, and stopped him from using the restroom. After 30 days of interrogation in a detention center for alleged fraud in Urumqi, Zhang was freed.

Upon release, to seek justice for the unlawful and unexplained detention, Zhang took legal action, as well as petitioned to different government offices, but to no avail. Through his numerous failed attempts to gain redress for the case, Zhang gradually learned the serious ills of the Chinese political system and began to publish articles online critical of the Chinese government. Meanwhile, he also started to help other petitioners have their own stories of suffering heard online. Zhang became a volunteer for the human rights website Human Rights Campaign (“权利运动”) in China and in 2010 signed a petition urging the Chinese government to abolish the extra-legal Reeducation Through Labor detention system. [Source]

Zhang’s sentencing follows a number of other moves against activists in recent weeks. Peter Dahlin, a 35-year-old Swedish co-founder of the Chinese Urgent Action Working Group, was detained on January 4th on suspicion of endangering state security. He has been forced to confess his alleged crimes on CCTV earlier this week. Some 15 rights lawyers and others have received charges including subversion and inciting subversion—the former in particular an unexpectedly heavy accusation.

At Reuters, Megha Rajagopalan and Sui-Lee Wee report that rights activist and former columnist Li Xin has been missing for more than a week after vanishing in Thailand, where he had sought political refuge. Li was last heard from before boarding a train en route to Laos.

A second rights activist, Li Xin, has been missing for 10 days after leaving Thailand for Laos with the hope of returning to Thailand to apply for political asylum, said his wife, Shi Sanmei.

Li, a former writer for the Southern Metropolis Daily, a respected semi-independent newspaper, arrived in Thailand from India on Jan.1 and boarded a train to the northeastern border town of Nong Khai where he tried to enter Laos, said Shi.

“When I heard he had gone missing, I was very shocked,” said Li’s friend, Liu Xuehong, a Thailand-based activist. “I think he’s in danger now and has probably been arrested.”

Shi said Thai police refused to accept her report of her husband’s disappearance, asking her to contact the Chinese embassy. [Source]

Meanwhile, Amnesty International released a statement announcing that seven activists detained in connection to rights lawyer Pu Zhiqiang’s trial have been released. Pu received a career-ending suspended prison sentence in December over a handful of online posts including some about Xinjiang which “incited ethnic hatred.”