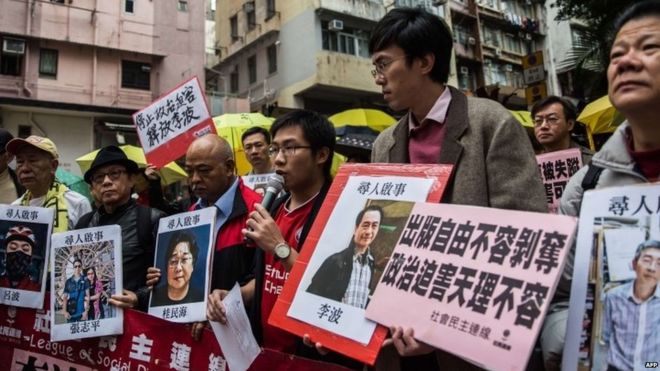 Amid unconfirmed reports that Hong Kong publisher and bookseller Lee Bo may face charges of blackmail, U.N. High Commissioner for Human Rights Zeid Ra’ad Al Hussein called on China to give Lee and his four colleagues also detained in China fair treatment. Chinese officials at the U.N. responded by insisting that Lee had traveled to China from Hong Kong on his own, despite widespread concerns that he had been taken there by Chinese security agents. Herman Wong reports for the Hong Kong Free Press:

“Lee repeatedly clarified that he voluntarily went back to mainland China for assisting in the investigation, and is safe and sound,” the statement read. The nature of the investigation and how Lee came to arrive in China remain unclear.

[…] Hussein sought clarification on the recent arrests and criticised China’s treatment of lawyers and activists. He said that there was a “worrying pattern” of the government using national security to restrict freedoms.

“Security and human rights do not contradict each other… Respect for human rights and public participation are key to ensuring rule of law and national security,” he added. [Source]

It is still unclear how Lee Bo traveled to China after disappearing in Hong Kong on December 30; he apparently traveled there without passing through normal customs procedures and then appeared in police custody in Shenzhen. His case is one of several recent cases in which dissidents and activists have shown up in Chinese police custody after disappearing abroad, leading some to accuse China of carrying out illegal renditions. In the New Yorker, Barbara Remick writes:

The men recently abducted by China were not suspected war criminals or terrorists. With one possible exception, they were not so much dissidents as irritants. Gui Minhai and Lee Bo’s Mighty Current Media specializes in thinly sourced and often salacious books about the Chinese leadership. At the time the men were kidnapped, the company was said to be planning a book called “Xi Jinping and His Six Women.” […]

Lee Bo (also known as Paul Lee), a British national, was investigating the disappearance of Gui Minhai and his three other colleagues, and giving interviews pressing for their release, when he himself fell into the dragnet. According to some accounts, he was set up by the person who claimed to be putting in a large book order. A pro-Beijing legislator at first claimed that Lee had crossed to mainland China to visit a prostitute and was detained there. Last month, that flagrant lie was changed to another, when a fax from Lee appeared, saying he had gone to China voluntarily to “assist in an investigation.” The three Mighty Current employees taken into custody within China made similar claims in calls to their families.

[…] Jerome Cohen, a law professor at New York University and an expert on the Chinese legal system, believes the recent round of abductions were so ham-handed that they may have been the work of local authorities, perhaps from Guangdong Province, across the border from Hong Kong. “You have to wonder what level of government authorized this,” said Cohen. “This is so embarrassing to the P.R.C.” He says the abductions will damage Beijing’s efforts to legitimately retrieve criminal suspects, especially those targeted in Xi Jinping’s anti-corruption drive, who have fled with their money to the United States, which does not have an extradition treaty with China. [Source]

While Lee disappeared from Hong Kong, his colleague Guo Minhai and several activists were discovered in police custody in China after disappearing in Thailand, raising concerns about Thai authorities’ cooperation with Chinese security. From Andrew R.C. Marshall at Reuters:

Two Chinese dissidents recently disappeared from Thai soil, only to reappear a few weeks later in China in police custody. Thailand deported two others late last year despite a U.N. plan to resettle them in Canada.

“Thailand is no longer a safe haven for Chinese dissidents,” said a senior Western diplomatic source based in Beijing.

China considers many dissidents to be criminals, including those who flee abroad. [Source]

Meanwhile, a group of international publishing, bookselling, and freedom of expression associations wrote an open letter to Hong Kong Chief Executive C.Y. Leung calling on his government to investigate the cases of Lee and his colleagues:

The forced disappearance and detention of Hong Kong residents by mainland Chinese authorities is a direct and fundamental threat to Hong Kong’s treaty-based regional autonomy. These actions clearly violate both the “one country, two systems” policy established by the 1984 Sino-British Joint Declaration, and Hong Kong’s Basic Law. Article 28 of the Basic Law protects Hong Kong residents from arbitrary or unlawful arrest, detention, or imprisonment. It also protects freedom of expression and press freedom (Art. 27), as does the International Covenant on Civil and Political Rights, which remains in force in Hong Kong. Your government has a legal as well as a moral obligation to defend these rights. [Source]