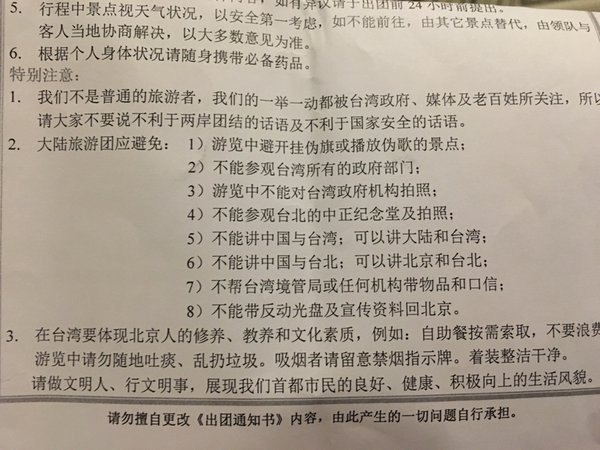 Growing tourism between China and Taiwan is part of an array of heightened contacts meant, from Beijing’s perspective, to reel the island inexorably towards the mainland. The number of Chinese visitors to the island more than quadrupled to 4.18 million between 2008 and 2015. Limits on permits for group travel to Taiwan around elections, however, underline the political sensitivities that come with this strategy. Meanwhile, the rise of a youthful Taiwanese identity and the electoral rejection of the pro-unification KMT in January showed that closer contacts may not translate to political rapprochement: as law scholar Jerome Cohen recently observed, “sometimes familiarity breeds contempt.”

A list of pre-departure travel advice purportedly issued by a Beijing travel agency and posted to Twitter by user Tianyu Fung appears show efforts to navigate this minefield. This is not the first time that Chinese citizens have been warned about proper etiquette before they travel overseas. But the tips for Taiwan-bound travelers have some unique characteristics. Tourists are encouraged to rein in behaviour that may make a bad impression on locals, and to steer clear of symbols of the island’s de facto self-rule.

1. We are not ordinary tourists: our every move will be followed by Taiwan’s government, media, and people. Therefore, everyone please refrain from saying anything detrimental to cross-Strait unity and national security.

3. In Taiwan, embody all the self-cultivation, education, and culture of a Beijinger. For example: at self-service buffets, do not waste food. While sight-seeing, please do not spit or drop litter. Smokers, please pay attention to No Smoking signs. Maintain a neat and tidy appearance. Act as a civilized person, conduct yourself in a civilized manner, and display the good, healthy, and energetic way of living of our capital’s residents.