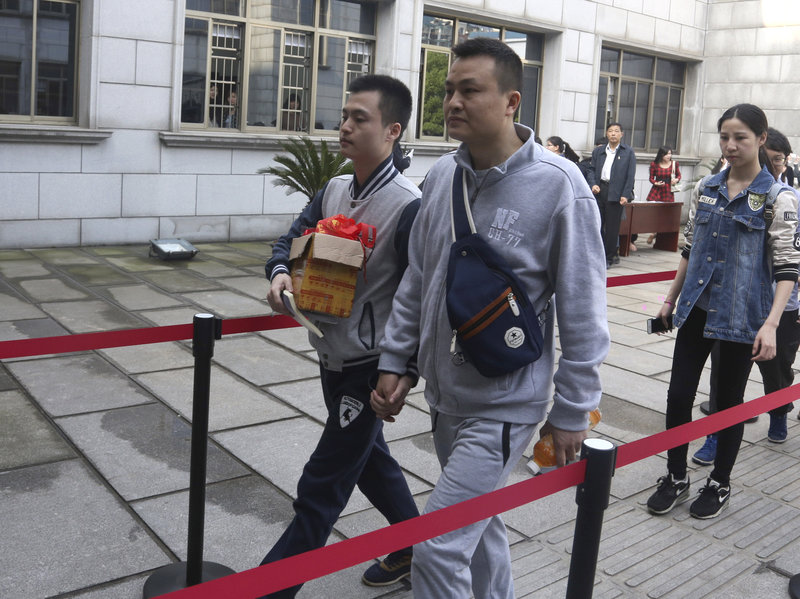 After being denied a license to marry his same-sex partner Hu Mingliang by the Changsha civil affairs bureau last June, Sun Wenlin filed a lawsuit against the bureau. The lawsuit was surprisingly accepted in January, and many in China’s LGBT community hailed the acceptance of the country’s first marriage equality case as a victory on its own. After being indefinitely postponed on its scheduled court date, the case was heard this week. The New York Times’ Edward Wong and Vanessa Piao report on the judge’s ruling against the couple, and on their vow to appeal the verdict:

Mr. Sun said in an interview that he and Mr. Hu planned to appeal. They will have to do so in the next 15 days, according to Chinese law.

Mr. Sun said that he had argued that he and Mr. Hu should be allowed to marry since the law did not explicitly ban same-sex marriage.

“We said this at the hearing, but they just kept repeating articles that mention ‘a man and a woman,’ ” he said, referring to the civil affairs bureau.

The bureau cited three articles from China’s marriage law and two from the official marriage registration regulation, he said, with four mentioning “a man and a woman” and one stating that a civil affairs bureau may refuse applications if it believes a couple is not qualified to marry. [Source]

Despite the verdict, the case has done much to galvanize support for LGBT rights in China, with hundreds of supporters showing up to show solidarity outside the court in Changsha. The AP’s Gerry Shih reports:

Though it was dismissed by the court in Changsha, China’s first legal challenge to a law limiting marriage to opposite-sex couples has galvanized many of the hundreds of young Chinese gay rights supporters who gathered at the courthouse, some of them waving small rainbow flags. The hearing’s sizable public turnout and coverage by usually conservative Chinese media appeared to reflect early signs of shifting social attitudes in China on the topic of sexual orientation.

The lawsuit that was dismissed was brought by 26-year-old Sun Wenlin against the civil affairs bureau for refusing to issue him and his partner, Hu Mingliang, a marriage registration certificate. The judge’s ruling against the couple came down after a three-hour hearing — but that didn’t dampen the mood of many of the hundreds of young Chinese who gathered outside the courthouse hoping for a chance to “witness history,” in the words of one supporter.

Some supporters, who had traveled overnight from neighboring provinces to line up at 5 a.m. to attend the hearing, said they felt energized because having a gay marriage lawsuit argued in a Chinese court for the first time was a small but significant victory in itself. Unlike in most politically sensitive legal cases, security outside the courthouse was light and the atmosphere was relaxed.

More seasoned activists said they too had reason to be optimistic given a pickup in legal challenges, even if successes in court remained few and far between. [Source]

The same-sex marriage case has received significant coverage in China’s state-run press. The official newspaper People’s Dailytweeted an image of Sun and Hu holding hands after the ruling.

The Global Times, a state-run English newspaper, interviewed Sun in January in a generally supportive article with the headline, “Man fights for right to marry boyfriend despite chance of failure.”

“Now, as the first person to do this in China, I feel it is not just my own business anymore. It has turned into a case with social significance,” Sun said, according to the newspaper. “Standing in this position, I hope to go ahead even further, so that those who follow will find the path easier.” [Source]

After the hearing, Sun Wenlin, 26, and his boyfriend, Hu Mingliang, 36, walked out of the courthouse hand-in-hand. They told the hundreds of reporters and supporters waiting outside that they were saddened by the result, but that they had expected it. They said they will appeal the court’s ruling.

Key to the April 13 hearing was the court’s interpretation of the phrase, “one husband and one wife,” as written in the Marriage Law of the People’s Republic of China. Shi Fulong, the couple’s attorney, argued that this means there can only be two people in a marriage, which does not exclude same-sex couples. But the government argued this phrasing means a man and a woman by pointing to another section of the marriage law that describes both parties involved in a marriage as “man and woman.”

In his final statement, Shi said, “Even if they win the case today, we will definitely win the future.”

The court concluded that, according to the marriage law, the two people involved in a marriage should be a man and a woman, that the law currently had no provision for same-sex couples, and that as such the government had correctly denied Sun and Hu’s marriage application. For these reasons, the court ruled against the couple. [Source]

At Tea Leaf Nation, Bethany Allen-Ebrahimian notes one reason that many Chinese web-users have cited for their support of the legalization of same-sex marriage: it could help to free up some of the “tongqi” (同妻), or “homowives” wedded to gay men due to the intense pressure to marry that exists in Chinese society:

In the hours after the April 13 ruling, many comments on microblogging platform Weibo placed tongqi front and center in the debate about same-sex marriage. “Those who oppose same-sex marriage are just producing more tongqi,” wrote one user in a comment that received more than 10,000 likes. “I don’t admire homosexual behavior, but if same-sex marriage is forever prohibited, won’t the tragedy of gay wives be more and more common?”asked another, adding, “The country should at least consider some reform measures on behalf of the poor women who are tongqi.”

Sham marriage is a serious problem in China, where social and family pressures drive 80 percent of gay men to marry women, according to estimates from Zhang Beichuan, who directs the Beijing-based nonprofit academic society China Sexology Association. Women married to gay men often face heavy emotional and social tolls, compounded in a society where divorce and homosexuality still carry strong stigmas. “Their husbands don’t want to look them in the eyes. They’re not willing to get close to them or touch their bodies,” Li Yinhe, a sexologist who works at the government-linked Chinese Academy of Social Sciences, told the Economist in 2010. “This is a huge blow to a woman’s sense of self-worth.” The issue has received growing attention in the past few years, including the well-publicized death of a woman in June 2012 who threw herself off a building after her husband came out to her. Her parents sued the man for luring their daughter into a sham marriage, but the judge rejected the case in 2013. […] [Source]

In recent years, there have been several court cases considered landmarks of progress by China’s LGBT community. In 2014, gay activist Yang Teng won a lawsuit against the gay conversion clinic that had attempted to alter his sexual orientation through shock therapy. In November 2015, college student Qiu Bai challenged the Ministry of Education in a Beijing court after discovering homosexuality continuing to be described as a mental disorder in many official textbooks; the court called for a second hearing in the case, and Qiu Bai vowed not to give up. Earlier this week, a labor arbitration panel in Guiyang heard China’s first case on transgender employment discrimination.