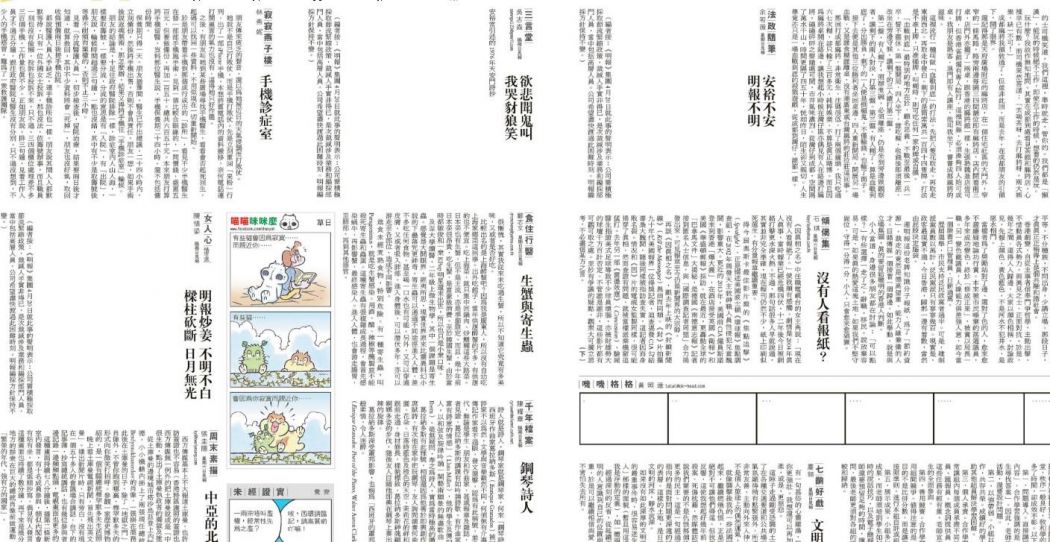 The firing last week of a former top editor at Hong Kong’s Ming Pao newspaper after the outlet ran a front page story on the Panama Papers stoked long-running concerns about the erosion of press freedom in the semi-autonomous region. The sacking of Keung Kwok-yuen, formerly the number two editor in Ming Pao’s newsroom, recalled the 2014 removal of Kevin Lau Chun-to from his role as editor-in-chief of Ming Pao after the International Consortium of Investigative Journalists (ICIJ) collaborated with the paper to release the Offshore Leaks disclosure; Ming Pao was one of many outlets that collaborated with ICIJ on the Panama Papers. At the South China Morning Post, Peace Chiu reports that three columnists protested the sacking by submitting blank columns that made it to print (despite attempts to block the move) in Sunday’s issue:

Veteran media personality Ng Chi-sum also left his column empty bar one line explaining his headline, which was quoted from a poem written by demonstrators at a 1976 Tiananmen protest in Beijing: “In my grief I hear demons shriek; I weep while wolves and jackals laugh.”

The association said in a Facebook post that Chong, who had been on leave, returned to work suddenly on Saturday night, proposing not to feature the columns about an hour after the pages had been sent to print.

After discussions, the blank columns were kept, but an editor’s note was included reiterating that the paper’s decision to dismiss Keung was due to cost-cutting measures and that the paper’s editorial stance remained unchanged.

The pages therefore had to be reprinted. [Source]

At the Hong Kong Free Press, Kris Cheng reports that the Sunday edition also included a comic protesting the firing of Keung, and notes that two additional blank columns were printed in Monday’s edition:

Comic artist Wong Chiu-tat also drew on Sunday a six frame comic which the first five only printed dots, and a last frame with a red jacket on an empty chair, apparently referring to Keung who usually wears a similar jacket.

[…] On Monday, the newspaper printed two more blank columns by radio host Lee Wai-ling – with a headline They Can’t Kill Us All – and university journalism educator Vivian Tam Wai-wan. The same editor’s note was also added to each column. [Source]

On Twitter, journalist and CUHK lecturer Yuen Chen compares the Sunday edition as it would have looked without the editor’s note, and reports that the Canadian edition of Ming Pao chose to fill the blank spaces with visuals:

Zunzi's take on MingPao's sacking of editor: Business is tough. To save ink costs for the boss, I'll just draw a dot pic.twitter.com/I3oMpUCsga

Concerns around the erosion of press freedom have grown in recent years as many in the former British colony have noted an increase in self-censorship due to economic pressure from China. This year, after several Hong Kong booksellers known for publishing titles on top Chinese leaders disappeared to emerge in detention in China, exacerbating concerns in the region. While three of the five detained booksellers have been released, the location of Gui Minhai—last seen in Thailand in October 2015—is still unknown. At The Washington Post, Fred Hiatt details Gui’s story, focusing on his daughter’s growing concern. China’s use of extra-legal means to detain people from abroad was criticized recently by Human Rights Watch’s Sophie Richardson.

As press freedom concerns continue to grow in Hong Kong, they are beginning to affect foreign media organizations with ties to Hong Kong. At The Guardian, Tara Conlan reports that the BBC’s planned relocation of its Chinese service to Hong Kong has some BBC staff worried that it could jeopardize editorial independence:

A letter is being sent to former BBC chairman and the last governor of Hong Kong Chris Patten and the Foreign Office to petition for support after the corporation decide to relocate the Chinese service off-shore to save money, but also because “competitors are outperforming us”.

Staff are worried the plan “risks undermining the UK’s long-term national interest “and so-called “soft power” and “grossly underestimates the level of threat posed by the Chinese regime in Hong Kong to both BBC editorial integrity and safety of BBC journalists”.

In an internal email to director of news James Harding, the BBC World Service head of language Liliane Landor laid out plans to restructure the Chinese service.

She makes a reference to the censorship in the region, saying: “We know that web-blocking and censorship have been a serious impediment but even in that context, our reach has been disappointing. Competitors are outperforming us. In such an important market, we have had to look at what we are doing that’s not working and try to address this.”

[…] According to Landor, 10 new posts will open in Hong Kong and 16 close in London, while creating one new post each in London, Washington and Nairobi, so “overall there will be a net loss of three posts for BBC Chinese”. [Source]