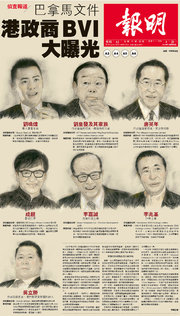 Keung Kwok-yuen, a top editor at Hong Kong’s Ming Pao newspaper, has been fired after the Chinese-language outlet published a front page story on the Panama Papers detailing the Hong Kong businessmen and politicians so far named in the leaks. The paper’s editor-in-chief Chong Tien Siong claimed that the firing was to “save resources,” and the paper released a statement citing a “difficult business environment” as the reason for cutting staff. Ming Pao is one of the many outlets collaborating with the International Consortium of Investigative Journalists (ICIJ) to reveal the millions of leaked documents from Panamanian law firm Mossack Fonseca, coverage of which has been tightly controlled in China. The firing has reinvigorated long-running concerns about the erosion of press freedom in semi-autonomous Hong Kong due to pressure from Beijing. The New York Times’ Michael Forsythe and Alan Wong report:

[…] The paper’s employees, represented by the Ming Pao Staff Association, confronted the chief editor, Chong Tien Siong, in a tense meeting on Wednesday afternoon, asking for a more thorough explanation of why Mr. Keung lost his job, Phyllis Tsang, the chairwoman of the association and a participant in the meeting, said by phone.

Mr. Keung’s firing also set off a round of condemnations from political leaders in Hong Kong. Many say the city’s press freedoms are being steadily eroded by what they see as the growing influence of mainland China. Hong Kong was promised a high degree of autonomy over its affairs as part of an agreement that led to its return to Chinese control in 1997 after more than a century and a half under British rule.

[…] Yuen Chan, a senior lecturer in journalism at the Chinese University of Hong Kong, pointed to Mr. Keung as one of the reasons Ming Pao was able to maintain a large degree of editorial independence.

[…] Ms. Chan and the Ming Pao employees’ association did not assert that Mr. Keung’s firing was because of the publication of the Panama Papers story.

“Nobody has been able to give one smoking gun reason,” she said. [Source]

Keung’s firing recalls the January 2014 removal of former Ming Pao editor-in-chief Kevin Lau Chun-to, who had overseen the paper’s partnership with ICIJ on the earlier Offshore Leaks disclosure. Lau’s removal sparked public protest and political debate over press freedom in Hong Kong. (Soon after being removed from his post, Kevin Lau was brutally attacked on the Hong Kong streets.)

At the Hong Kong Free Press, Kris Cheng reports further on anger expressed by the Ming Pao Staff Association over Keung’s firing, and their rejection of the paper’s stated reason for it:

“The Association thinks that the incident was unclear, [we] question whether the company was using the reason of ‘saving resources’ on the surface, but actually punishing staff members who have different opinions on editorial issues,” a post on the union’s Facebook page said.

[…] “The operational environment of the newspaper industry is difficult, the company has to actively take on cost-cutting measures. We are left with no alternative but to cut staff – this cut involved business and editorial staff, including top-level staff,” a statement from Ming Pao said.

“The company hopes to get past these difficult times as soon as possible. The editorial policy of Ming Pao remains unchanged.” [Source]

A separate report from HKFP’s Kevin Cheng notes that several other Hong Kong media unions have released a joint statement protesting the sudden firing of Keung:

A group of seven media unions say they are “deeply shocked” by the sudden firing of Ming Pao’s executive chief editor. The media unions said the reason given by the newspaper’s management was “far-fetched”.

[…] In a statement, the unions said: “We feel deeply worried and disturbed about the space and freedom of press, as a moderate and professional journalist was suddenly fired by executive means.”

The statement said Keung, a veteran journalist responsible for the newspaper’s editorial direction, was perceived by many staff members to be the “soul of the team”. It questioned whether there were other considerations behind the “unusual arrangement”. [Source]

Erosion of the relative freedom of press enjoyed in Hong Kong has long been a concern, as many in the semi-autonomous former British colony have noted an increase in self-censorship due to economic leverage exerted by China. These concerns have mounted in recent months after several Hong Kong booksellers associated with a publishing house known for releasing salacious titles on top Chinese leaders disappeared from Hong Kong or Thailand to appear in detention in China.

In mainland China, Xi Jinping has been overseeing the reinforcement of Beijing’s system to control the media through a regime of official censorship reinforced by incentives to self-censor. Xi’s efforts have recently seen several notable instances of backlash from high-profile media professionals, including the resignation of veteran Southern Metropolis Daily editor Yu Shaolei.

Late last year, the Committee to Protect Journalists’ annual global census of imprisoned journalists found China to be the world’s worst offender, beating its own record from 2014. China has also consistently scored towards the bottom of Reporters Without Borders annual World Press Freedom Index. The 2016 index, which was released today, has China at 176/180 countries rated, the same position it held last year. The 2016 index was released with a warning that the world is entering “a new era of propaganda,” showing declining conditions for press freedom globally. AFP reports:

The World Press Freedom Index ranks 180 countries on indicators such as media independence, self-censorship, the rule of law, transparency and abuses.

This year’s index saw a decline in all parts of the world, said Christophe Deloire, secretary general of the Paris-based group, with Latin America of particular concern.

“All of the indicators show a deterioration. Numerous authorities are trying to regain control of their countries, fearing overly open public debate,” he said.

“Today it is increasingly easy for powers to appeal directly to the public through new technologies, and so there is a greater degree of violence against those who represent independent information.

“We are entering a new era of propaganda where new technologies allow the low-cost dissemination of their own communication, their information, as dictated. On the other side, journalists are the ones who get in the way.” […] [Source]