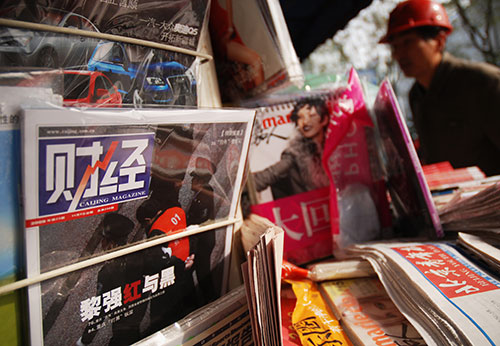 In their annual global census of imprisoned journalists, the Committee to Protect Journalists finds that China is again the world’s largest jailer of journalists this year, with 49 currently behind bars—a record for the country, up from 44 last year:

A quarter of those jailed globally are in China, the world’s worst offender for the second year in a row; the 49 journalists in prison there are a record for that country. As President Xi Jinping continues his crackdown on corruption and as the country’s economic growth slows and its markets become more volatile, reporting on financial issues has taken on new sensitivity. Wang Xiaolu, a reporter for the Beijing-based business magazine Caijing, was arrested on August 25 on suspicion of “colluding with others and fabricating and spreading false information about securities and futures trading” after he reported that a regulator was examining ways for securities companies to withdraw funds from the stock market. He later appeared on state television saying that he regretted writing the story and pleading for leniency, even as it was unclear whether he had been formally charged with a crime. As CPJ has documented, televised confessions are a tactic repeatedly deployed by Chinese authorities for dealing with journalists who cover sensitive stories.

The lengths to which China is willing to go to silence its critics is demonstrated by at least three people not on CPJ’s imprisoned list: the brothers of Shohret Hoshur. The Washington D.C.-based Uighur journalist for U.S. government-funded Radio Free Asia (RFA) reports critically on China’s treatment of his ethnic minority. According to Hoshur and RFA, China, unable to arrest him, has thrown three of his brothers who still live in the Xinjiang Uighur Autonomous Region—Tudaxun, Shawket, and Rexim—into jail on anti-state charges in retaliation for Hoshur’s work. [Source]

Alongside a widespread crackdown on civil society by the Xi administration, central authorities have in recent years renewed their efforts to control media coverage and encouraged the nation’s reporters to adopt a “Marxist view of journalism.”  Last month, just in time for China’s “Journalists’ Day” on November 8, Xinhua reported on a pact singed by 50 domestic media organizations promising to “protect the leadership of the CCP and the interests of the state.”

The report, a snapshot of those imprisoned as of Dec. 1, found 199 journalists languishing in jails around the world, a modest decline from the 221 in 2014. One-quarter of them were in China.

The most significant change from a year earlier, the group said, was the increase in Egypt, now the second-worst jailer behind China. The group said the Egyptian authorities were holding 23 journalists, nearly double the 12 of a year ago, and it attributed the increase to the policies of President Abdel Fattah el-Sisi, who “continues to use the pretext of national security to clamp down on dissent.”

In Turkey, which led the list in 2012 and 2013 but released dozens of journalists in 2014, oppressive conditions for the news media worsened this year. The number of journalists in Turkey’s jails doubled to 14, which the organization attributed to a crackdown on reporting deemed critical of President Recep Tayyip Erdogan amid two general elections, further entanglements in the Syrian civil war and the end of a cease-fire with Kurdish militants.

Other significant jailers of journalists in 2015 included Iran, with 19; Eritrea, with 17; Ethiopia, 10; Azerbaijan, 8; Syria and Saudi Arabia, with 7 each; Vietnam, 6; and Myanmar, Bangladesh and Bahrain, with 5 each. […][Source]

Looking to data collected by the CPJ, Joel Simon notes that U.S. pressure is a key factor in winning the release of journalists in countries with close relations to Washington, and that pressure is not being applied in a consistent manner. From the Columbia Journalism Review:

The worst abuses often occur in countries where the US has limited influence—China, Iran, and Eritrea. But many countries on CPJ’s imprisoned list are US allies or places where the US has significant leverage. Places like Egypt, Turkey, Ethiopia, Azerbaijan, Saudi Arabia, and Vietnam. Because there are strategic and commercial interests at stake in these countries, the US has been unwilling to apply the necessary pressure to get the job done.

That needs to change, and it’s in the best interest of the United States that it does. President Obama and Secretary of State John Kerry have both defended press freedom and keep that right high on the US foreign policy agenda. Last year, to mark World Press Freedom Day, President Obama hosted persecuted journalists from Ethiopia, Vietnam, and Russia at the White House. As part of its annual #FreethePress campaign, US officials around the world highlighted selected cases. (I was a panelist at an event at the UN mission hosted by Ambassador Samantha Power.)

When the US puts pressure on, it can make a difference.  […]

[…] But the US approach has been inconsistent. In the case of key US allies such as Egypt, Turkey, Saudi Arabia, and Bahrain, pressure has been muted by security considerations, as all are seen as essential to stability in the Middle East. […] [Source]