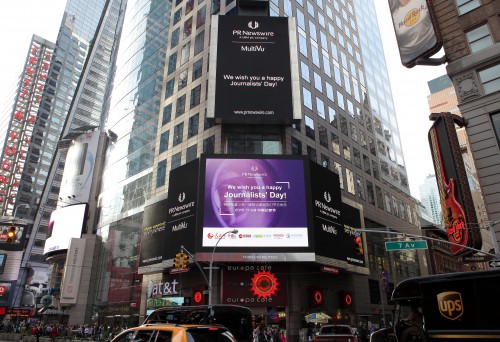 As China marked its annual Journalists’ Day over the weekend, proclaiming the importance of “correct news ideals,” even jaded New Yorkers stopped in their tracks and took notice. How could they not? The message beamed over 7th Avenue on Times Square, dominating one of the world’s most visible jumbotrons. According to a Chinese-language press release posted by the marketing department at PR Newswire, “many New Yorkers stopped to watch and take photographs.”

Of course, this is all pure fantasy.

[…] But the fantasy nevertheless reveals a great deal of truth about how the Chinese Communist Party continues to understand the role of journalists and the media today. Fifteen years after Journalists’ Day was created in 2000 as one of three professional holidays in China, the country’s leaders still refuse the media’s right to exist as a true profession, rather than as a proxy of Party-state power. [Source]

The press release, Bandurski notes, claims that Chinese news reports have won global recognition, which has “objectively and impartially revealed to the world China’s openness and vitality.” The number of its news workers, moreover, “far surpasses the other countries of the world.” China has some 208,000 officially registered journalists, whose ranks swelled slightly last week as media authorities issued the first press credentials to online outlets. From Xinhua:

The Cyberspace Administration of China (CAC) and the State Administration of Press, Publication, Radio, Film and Television (SAPPRFT)issued press cards to the first group of 594 reporters from 14 “major central news portals,” including the authorized Chinese government portal, the official websites of People’s Daily and Xinhua News Agency and the portal for Tibet. The employees of commercial news portals such as Sina and Sohu were not included.

“The press cards distributed today are the same as those held by traditional media. Card holders enjoy the same reporting rights, responsibilities and obligations,” CAC spokesperson Jiang Jun said at the distribution ceremony.

[…] China previously banned most websites from reporting on news, only allowing them to edit and publish news from traditional media. Despite this, there had been a trend for websites to follow up their own stories, interview sources and release news in their own name.

A total of 50 media organizations signed a pact in September promising to uphold media ethics. It included clauses on the promotion of “healthy and tasteful style” and united opposition of false reporting, vulgar content, harmful information, plagiarism, and false advertising. Those that signed were from across the press, publication, radio, television and film sectors.

The signatories pledged to “protect the leadership of the Communist Party of China and the interests of the state, and to not publish or spread any information that would undermine the image of either.”

[… T]he committee will also be tasked with dealing with any misdemeanors by signatories, with punishments such as warnings, demotion or dismissal. It can also order individuals or organizations to issue public apologies, disqualify them from awards or blacklist them, effectively barring them from working in the industry. [Source]

Harsher penalties still are enshrined in new Criminal Law amendments, which include sentences of up to seven years in prison for spreading “false news” on “hazards, epidemics, disasters, and situations involving police.” Standards of truth in such cases are frequently political. Meanwhile, a state newspaper editor was recently fired and expelled from the Party for “improperly” criticizing government policy in Xinjiang. Journalist Liu Wei was detained last month for allegedly obtaining state secrets while investigating corruption, and others were ordered not to report on his case. The Southern Media Group for which Liu worked may finally have been pushed onto the “correct road.” Foreign reporters and their Chinese news assistants have faced continuing harassment.

On the other hand, it is true that some Chinese reporting has captured global attention, including some defiant investigations in the aftermath of August’s deadly explosions in Tianjin. Years-long efforts to prosecute journalist Liu Hu for defamation collapsed in September, while the visa restrictions with which The New York Times has been punished for reporting on leaders’ business dealings appear to have been relaxed.