Cultural Revolution’s Memory on the Brink of Extinction 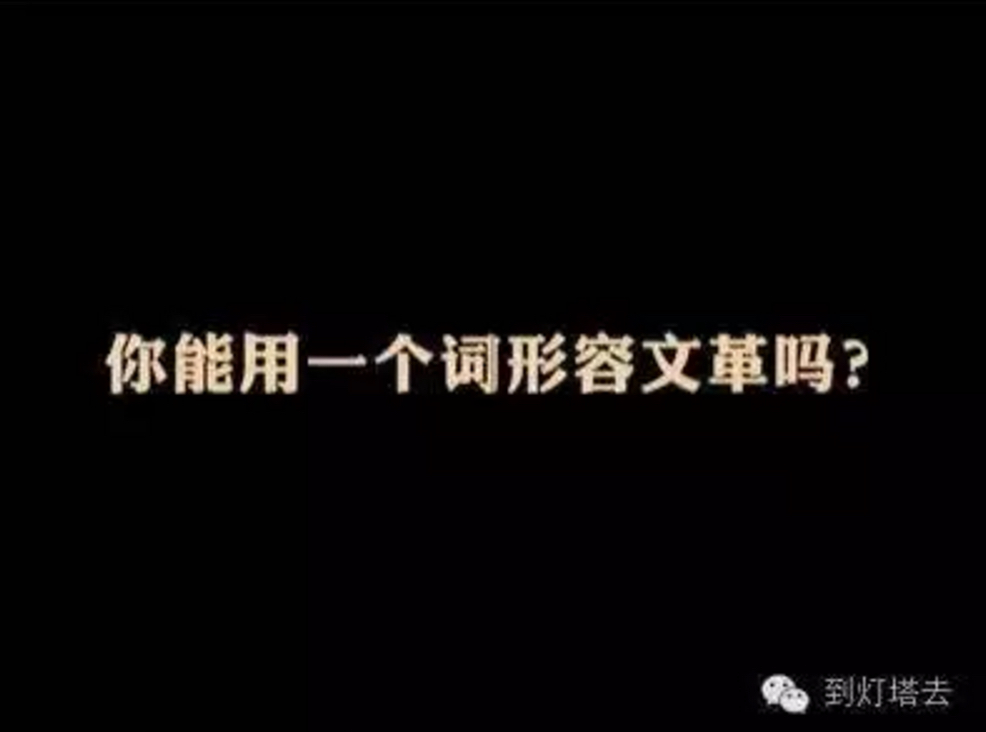 On May 16, the 50th anniversary of the start of the Great Proletarian Cultural Revolution, Hong Kong’s Phoenix Television aired a vox populi segment interviewing many student-aged Chinese on their impressions of Mao’s infamously disastrous campaign—one that has largely been flushed down China’s memory hole. A post on the Phoenix Weibo account summarizing the segment has since been deleted, but it has been saved by CDT Chinese, and translated below. For more screenshot images of the interviews, see CDT Chinese.

Phoenix History: We Interviewed Many Young People to Discover the Cultural Revolution is All But Forgotten

May 16, 2016 marks the 50th anniversary of the start of the Great Proletarian Cultural Revolution. 50 years ago, the younger generation of the day entered their old age.

What do the the youth of today think when looking back at those formative years?

In order to discern this, we’ve arranged a series of questions, and interviewed many young people we met on the street, to make this short clip. They have responded as such….

Question 1: Please use one word to describe the Cultural Revolution 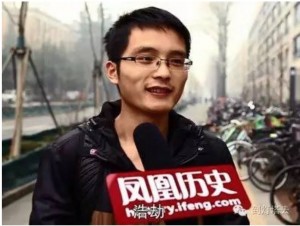 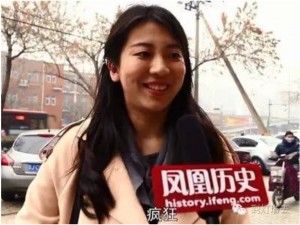 Those two answers didn’t meet our expectations. But some answers were more like this:

Yes, some youth first think of these types of keywords when the movement characterizing those years is mentioned, unaware that people who lived through it might see their assessment, and what feelings and emotions they’d have. 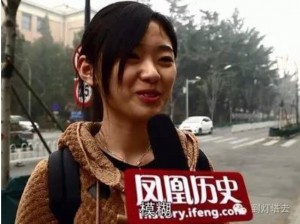 This was a common response. It represents the impressions of many young people regarding the Cultural Revolution, doesn’t it?

Question 2: Is it common to discuss the topic of the Cultural Revolution in your daily life? 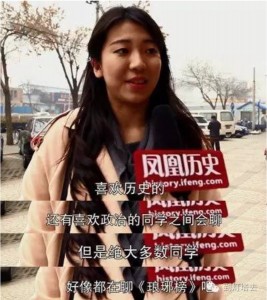 “I like history, and I also like talking about politics with my classmates. But, the vast majority of them seem to just talk about “Nirvana in Fire.” 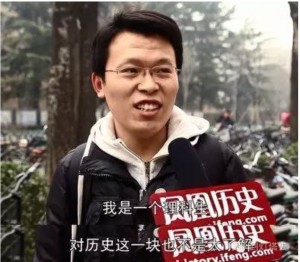 “I’m a science student. I don’t know much about history.” 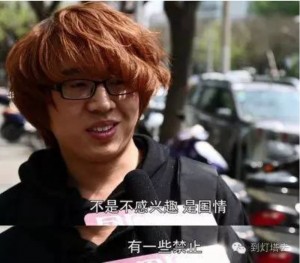 “It isn’t that I’m not interested, it’s the national conditions. It’s a bit prohibited.”

Don’t understand, don’t pay attention, not interested—these were the most common replies. We have no choice but to say that the Cultural Revolution as a serious historical topic has all but faded from the view of many youngsters.

Question 3: How did you form your understanding of the Cultural Revolution?

We discovered that most young people learned about this chapter of history through interactions with their elders. 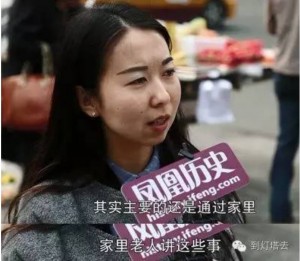 “Actually, mainly through my family. The older members of my family talk about these things.” 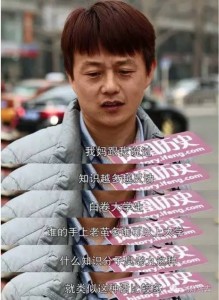 “My mom told me that she only knows it became more and more reactionary. There were blank exam papers. Only those with the most calloused hands could attend university. Something about intellectuals, a type of “Stinking Old Ninth” intellectual. Something like that.”

But it’s difficult to grasp these little details based on what’s written in the textbooks.

Even if a teacher talks about it, it’s unlikely for a young person to develop an interest. 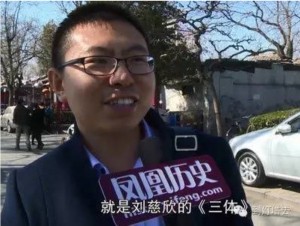 Question 4: Is there an aspect of the Cultural Revolution that would be especially difficult for you to accept?

Of course, some students most certainly understand history, for example, the following two:

A point of view that is worthy of attention is that some young people believe the Cultural Revolution had a so-called “positive side,” in that it “attacked” corruption. This is clearly a misunderstanding. 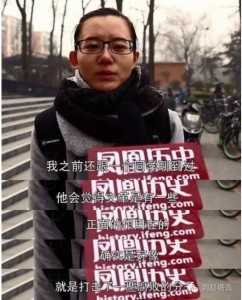 “Once I talked about it with a classmate who felt the Cultural Revolution had a ‘positive side.’ Really, it seems like it was intended to strike against corruption.” 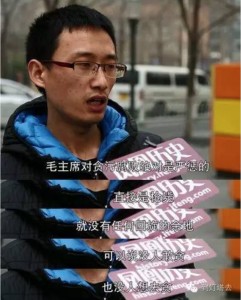 Chairman Mao wanted to unconditionally punish corruption directly by execution without any leniency whatsoever. You could say that nobody dared to go corrupt, nobody even thought about it.

Question 5: If you were there during the Cultural Revolution era, would you have been likely to participate in the political movement?

Those two students meet the criteria for membership in the “carefree clique.” But, many people also expressed a certain answer: 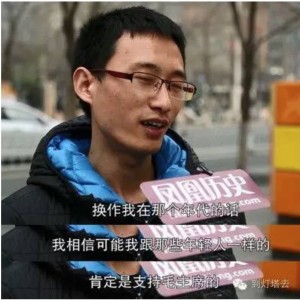 “If you put me in that era, I believe I could have been the same as those young people. I definitely would have supported Chairman Mao.”

Do these types of answers seem extreme?

Aside from voluntary participants, there are also some who confess that in those circumstances it would have been tough to not get involved:

Aren’t those answers quite a bit more sobering?

The Cultural Revolution is a great tragedy of contemporary Chinese history, and serves as a lesson we’d be wise not to forget. Based on the results of our interviews, it cannot be denied: today, after 50 years, many young people’s knowledge of this chapter of history is perplexed, warped, or even blank…. But we can still find some youth with a basic knowledge of the Cultural Revolution: 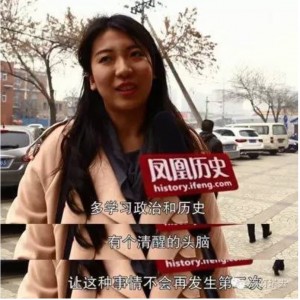 “Study politics and history, and keep a clear mind, and there won’t be a second Cultural Revolution.” 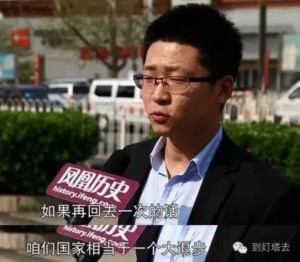 “If it were to happen again, it would be a major setback for our country.”

Many of those who personally experienced it have a similar understanding. 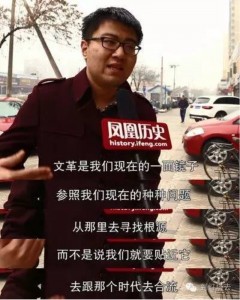 “The Cultural Revolution is a mirror for us today. We can refer to it when confronting many types of problems. We can look for its roots, and make sure we don’t again flow into that stream.”