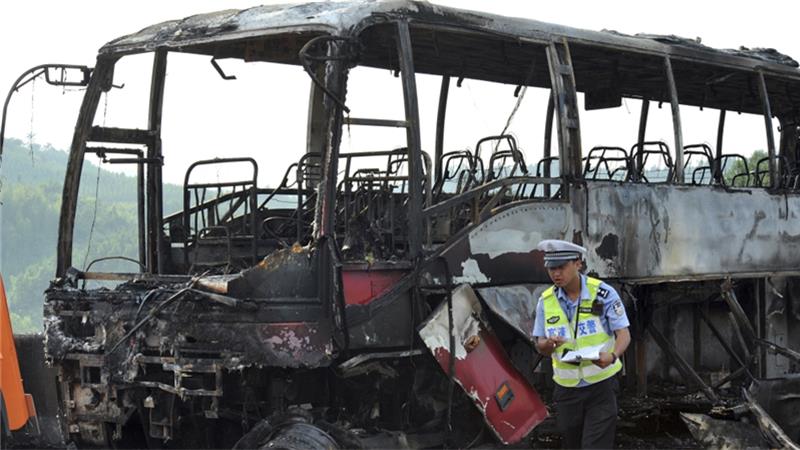 Regarding the high-speed Hunan bus incident that led to a fire and major casualties on June 26, all media are to follow information from local authorities when reporting. Do not exaggerate, and do not send journalists to cover the story. (June 27, 2016) [Chinese]

At least 35 people died on the morning of June 26 when a tourist bus caught fire after an accident in Hunan Province. The South China Morning Post’s Choi Chi-yuk reports:

Fifty-five people were on board the coach when it smashed into a roadside barrier at about 10.20 am on Sunday morning in Yizhang county.

A motorist who was behind the bus when the accident happened told the Shanghai-based news website Thepaper.cn that a survivor had told him they were all members of a tourist group from Leiyang in Hunan and were on their way to go white-water rafting.

“After the bus crashed on guardrails on the highway, a total of two or three children, one middle-aged man and seven or eight women in their 40s got off the bus,” the report quoted the witness as saying.

[…] The cause of the accident was not immediately known, but Xinhua cited sources in the Yizhang county government as suggesting that preliminary investigations showed it may have been triggered by an oil leak. [Source]

Coverage from Xinhua notes that the bus driver has been detained.

There have been several bus accidents in China in recent years, some caused by suspected arson, and others by broken safety rules. Unscheduled pickups due to commercial pressures have complicated enforcement of regulations like those against carriage of inflammable materials. Authorities are often quick to issue directives on fatal bus fires, as they did in a 2013 case in Xiamen, a 2014 incident in Sichuan, and another earlier this year in Ningxia.