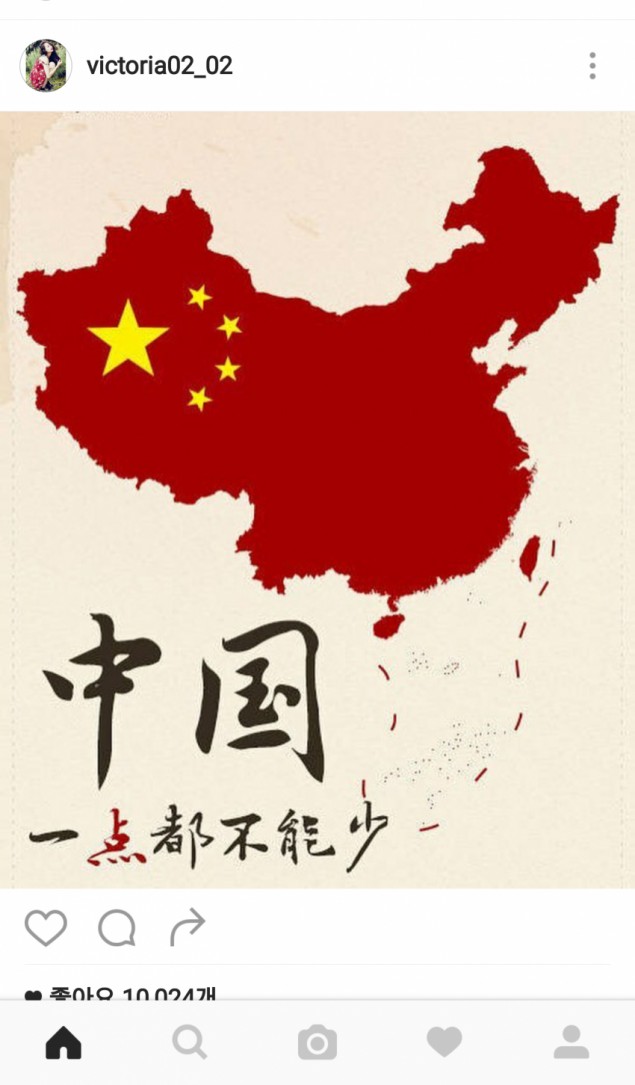 Chinese K-pop stars have weighed in on their home country’s claims in the South China Sea, angering non-Chinese fans while earning accolades in a Chinese military newspaper. Chinese government officials and state media have roundly condemned the tribunal organized by the Permanent Court of Arbitration, which ruled against China’s claims to historic rights over much of the South China Sea earlier this month. Meanwhile, some Chinese-born celebrities have been showing their support for Beijing on Weibo and Instagram, as allkpop’s jennywill reports:

The ruling has sparked SNS movements across China, including pictures of China with the contested land. The hashtag translates to, “China cannot become any smaller“. The map and hashtag related to the movement were recently used by popular K-Pop idols including f(x)‘s Victoria, EXO‘s Lay, miss A‘s Fei, Jia, and FIESTAR‘s Cao Lu. As the contested land includes islands considered to be a part of not only The Philippines, but also Vietnam, Malaysia, Brunei, and even Korea on the eastern side, many fans of these countries are expressing disappointment toward the idols for supporting the Chinese movement. [Source]

The hashtag and an image bearing the same slogan has a double-meaning: “China can’t be one bit less” (中国一点都不能少) can also be read as “China can’t spare one dot,” an allusion to the nine-dash line demarcating China’s maritime claim. On Thursday, Chinese landscape painter and member of the state-run China Calligraphers Association Hao Donghong wrote an appeal to artists in the China Defense Report (中国国防报). He warned that some artists “take out their calculators” when considering the effect their political views may have on their fan base:

Art has no borders, but artists have their motherlands. In wartime, the Peking opera master Mei Lanfang put his beard away. He would rather scrape by than perform for the Japanese. There are those artists, from the bit players and the understudies to the brightest stars, who through all the lucky breaks, perseverance, and improvement of their skills, still do not leave behind the flourishing and development of the country’s cultural enterprise, who never stop caring about and supporting the compatriots of their motherland. They never forget the mother who nurtured them. Even if they earn awards abroad and have legions of foreign fans, the people of their motherland must always be in the artist’s mind. When their motherland needs them, they must courageously voice their patriotism. [Chinese]

(Incidentally, Mei Lanfang was famous for playing the female lead, or dan 旦, and so would have had no beard to stow away.)

On Weibo, netizens poked holes in Hao’s argument. Perhaps alluding to mainland pressure on Hong Kong star Denise Ho and Taiwanese singer Chou Tzu-yu, one user wrote, “Artists from Hong Kong, Macau, and Taiwan are in a hard place. If they aren’t cursed by the little pinks on the mainland, they’re cursed by their own.”

Others questioned what type of patriotism is acceptable for artists, and for others:

Yishiyilang (@易十一郎): If you don’t have the right to say no, only to follow imperial orders and love your country, then sooner or later this country is finished!

LinshanlingSonia (@林珊玲Sonia): One shaky little question: If there was an artist who proclaimed “I love the constitution,” or “let official assets see the sun,” wouldn’t they be be shut up right away?

Nongmingengzhewuqitiansheiguowen (@农民耕者无其田谁过问): That guy who started singing red songs, where is he? [Chinese]

Cartoonist Badiucao riffed on the “not one bit less” campaign image, turning the map of China and the nine-dash line into a pile of pills. Here he alludes to the phrase “the Great Qing pill,” which plays on a line from Lao She’s play “Teahouse” and is used by netizens to express indignation at the government and despair for China’s future:

In an October 2014 speech, President Xi Jinping called literature and art “an important battlefront for the Party and the people,” conjuring comparisons to Mao Zedong’s 1942 speeches at Yan’an on the role of art in service to communism and the revolution.