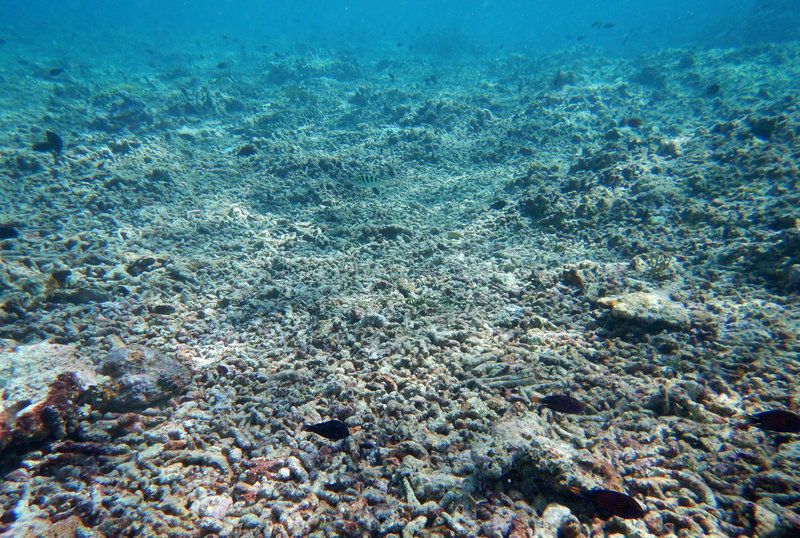 In July, the Permanent Court of Arbitration in The Hague ruled against China’s claims to sovereignty over disputed islands in the South China Sea. Chinese officials and state media quickly responded by condemning the tribunal’s ruling as “nothing but a scrap of paper.” The Hague tribunal also analyzed the environmental impact of China’s construction of islands over disputed reefs, a practice that Beijing had previously claimed causes only minor, recoverable damage. At NPR Parallels, Jackie Northam surveys expert commentary on the severe environmental destruction caused by China’s construction activities in the South China Sea:

“The tribunal clearly decided that China had caused severe harm to the coral reef environment,” he [Kent Carpenter, biological science professor and expert witness for the tribunal] says. China also violated its obligations under the United Nations Convention on the Law of the Sea “to preserve and protect fragile eco-systems,” he says.

The tribunal found that damage to the coral reefs in the Spratly Islands is extensive, spreading for more than 30 square miles. Much of that damage is caused by China’s island-building — turning pristine reefs into permanent military outposts that include massive runways.

John McManus, a professor of marine ecology at the University of Miami, says the Chinese use huge dredgers to pull up sand and anything else in their way.

“They’re using a grinding ball,” he says. “It’s got grooves and teeth and it spins around and tears up living coral and parts of the coral reef substrate, to make more gravel and sand to be sucked up and used for island-building.” [Source]

A report from Rachael Bale at National Geographic looks at the destruction of coral reef in the South China Sea. Bale notes that far more destructive than Beijing’s island constructing endeavors is the poaching of giant clams—driven in part by a huge Chinese demand for the threatened species:

[…] “Most Chinese citizens have no idea what kind of environmental devastation China has done in the South China Sea,” says Gregory Poling, the director of the Asian Maritime Transparency Initiative at the Center for Strategic and International Studies, a Washington, D.C.-based think tank.

“A person owning products from tigers or elephants is likely to be socially ostracized,” McManus says. “However, owning a product from a threatened species of clam generally carries no such stigma.”

[…] China has often defended its island building by saying it limits construction to reefs that are already dead. But according to McManus, satellite imagery shows that at least some of the reefs were dead only because giant clam fishermen had ground them up before the construction crews moved in. […] [Source]

Earlier this month at the National Review, senior Maritime Security Initiative fellow Abhijit Singh provided a detailed explanation of why the South China Sea is on the verge of “environmental disaster.” After pointing to both the issues of illegal harvesting and Beijing-backed island-building, Singh warns that politics in the region are distracting the world from the rare biodiversity currently under threat in the South China Sea:

Of all the “strategic” challenges confronting the Asia-Pacific region, none is as underrated as the destruction of the marine ecosystem. The South China Sea’s status as a critical waterway draws attention away from the fact that littoral Southeast Asia is one of the world’s most diverse global marine bio-systems, hosting 76 percent of the world’s coral species and 37 percent of reef-fish species. Over the past two decades there have been documented instances of Chinese fishermen in the Spratly Islands and surrounding waters indulging in large-scale illegal capture of fish using cyanide, dynamite, and detonating cords. The wide range of sea life targeted has included endangered sea turtles, giant clams, giant oysters, sharks, eels, and large pieces of highly ornamental coral.

In the wake of a UN tribunal’s quashing of Beijing’s claim to historic rights in the South China Sea, what has been largely overlooked is the court’s censure of Beijing’s rampant destruction of marine life around the sites of its reclamation and other activities in the Spratly Islands.

[…] As the world obsesses over the geopolitical effects of the South China Sea dispute, there are urgent questions about the marine environment that need to be answered. The marine resources of the South China Sea are central to the national economies, the livelihoods of many of their coastal residents, and important as a source of cheap and nutritious food. There is an impression, however, that the sovereignty disputes have diminished the ability of governments to work together to manage the marine resources of the South China Sea. Regional governments must dispel this notion. China and its neighbors must put traditional rivalries on hold, and combine effectively in a renewed bid to revive and restore the maritime ecology of the Asia Pacific.  [Source]