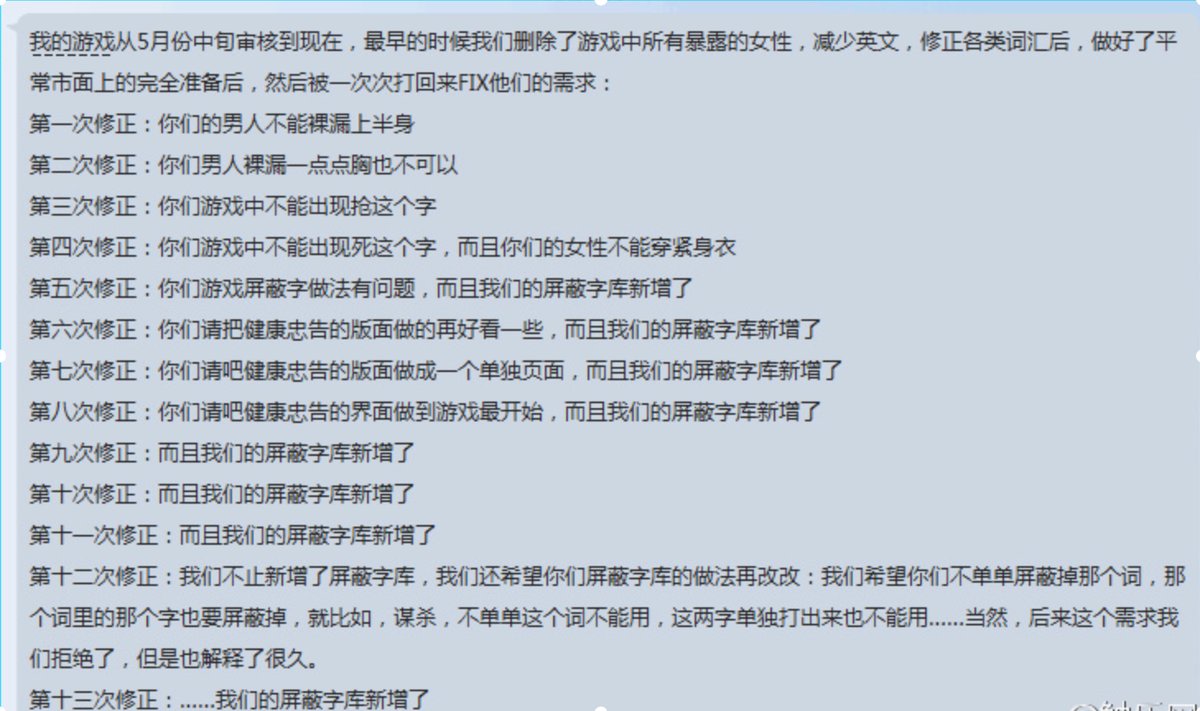 Like other media, video games in China are subject to a wide range of political and moral content requirements. These have included mandatory in-game fines for virtual second children; bans on simulated panda-hunting and mechanics intended to encourage excessive gaming and addiction, particularly among children; and the retroactive monogamization of China’s emperors. At the same time, authorities have offered substantial subsidies to developers, particularly those whose games have patriotic or otherwise politically harmonious themes.

Twitter user @DonEvansWm posted a description of a recent experience of the pre-publication inspection process:

DonEvansWm: #China A game submitted for approval was sent back 13 times. The reasons for rejection included: male characters cannot have bare nipples; the characters for “robbery” or “death” may not appear; please make the health advisory screen look a bit better, etc. 9, 10, 11 … China’s repressive regulatory #FreedomofSpeech

My game has been under inspection since the middle of May. Right at the beginning, we removed all female nudity, reduced the amount of English, revised the vocabulary, and made all the usual superficial preparations. Then we beat down each of their required fixes, one by one:

Shizisang (@十字桑): I can’t believe it, our company’s game didn’t pass inspection because it uses English in a few places. Like “mission start/complete”; when the “boss” appears, it says “warning” … Fucking State Administration of Press, Publication, Radio, Film and Television, [if you hate English that much] why don’t you go after the fucking Ministry of Education? … and on top of that, we submitted the game in March, so it took them four damned months to give us the results ………

Shizisang (@十字桑): After changing the resources that should have been in English into Chinese, I felt kind of bewildered. For example, where it should have said “GO,” it said “前进” [“advance”] … it was really kind of funny. Although my strong suggestion to replace “YOU LOSE” with “你完蛋了” [“You’re Done”] was vetoed by the others. Hmmmph. [Chinese]

Widespread adoption of English terms and Roman characters has attracted occasional controversy in the past.

tinyfool (@tinyfool): Even IT professionals must face the idiotic SAPPRFT now

Shasila (@傻斯拉): Hahaha, I guess this is your first time submitting a game for inspection? I remember doing it, it was like eating dogshit

firemeV (@firemeV): Time for braindead talking points like “this is the best of times, this is the worst of times,” “we’ve already made so much progress from the past,” “if there were no inspections, more and more young people would be destroyed by gaming,” “the government department does these strict inspections for your own good”

TechnoCore (@TechnoCore): I don’t understand your country. The IT sector is a bright spot in a general economic slump, and you’re still trying to choke it. With all these lay-offs, video games are the cheapest entertainment option [for the unemployed]: objectively speaking, how big an effect does this have in maintaining stability? And you’re still trying to kill it？I don’t understand your country.

Yingge (@硬哥): This reminds me of when we had to call the NBA the “American National Basketball Association Male Professional League” ….

Jingshangongyuan51qu (@景山公园51区): Creative industries are to be strictly examined without question—there’s no need for a game to be published unless it reflects the Party’s greatness, glory, and correctness

MulailuntaiwangAMADEUS (@牧濑伦太郎AMADEUS): SAPPRFT is like: “‘Warning’? I don’t understand this, is it a swear word? ‘Mission Complete’? I guess this means opposing the Party and society? Anyway, foreign things are bad”

_Tianqu (@_天驱): One month to make a game and three months in inspection is crazy [Chinese]